In the early to mid-60s “Peyton Place” also aired twice a week for (four?) years and brought some new iconically “soapy” subjects to prime time, ‘keeping some of us coming back for more time and time again!’

But, admittedly, not as “shocking” and “in your face” topics as “All in the Family!”

“Peyton Place” was never really on my radar, being all of ten when it first premiered in 1964.  (Not that my parents would have ever let me watch it in the first place … nor would I have understood it anyway!!! Lol)

It looks like it actually aired for five seasons (1964 - 1969) and is pretty much recognized as the “first prime time soap,” a genre that would continue thru this very day.  (I never saw the 1957 movie that inspired it either!  But the book apparently was a smashing success and all the rage when it first came out.)

The series launched the careers of Ryan O’Neal and Mia Farrow and was originally conceived as an adaptation of the long-running successful British television series, “Coronation Street” (which starred our buddy Peter Noone back in the day.)

Producers, however, evidently felt that Americans wouldn’t adapt to the thick heavy British accents so they sent the creators back to the drawing board, at which time they came up with this concept instead … weave the drama and sexual tension of the book and movie into a weekly television series and (as Chuck and I both reiterated), keep the viewers coming back for more and more.  (A prevalent incest storyline from the book was dropped for the tv adaptation.  This was, after all, 1964!)

Although “Peyton Place” had a loyal following, it wasn’t a particularly big following and, when it went off the air in 1969, none of its loose-end storylines were ever wrapped up, leaving most viewers frustrated after devoting so much time to the series along the way.  (By the way, I read this week that the first tv comedy to actually put together a “planned” finale was “Leave It To Beaver” … the show ends with Ward, June, Wally and The Beav all sitting around the living room, going through a photo album, which sparked clips from previous episodes, making it also the first “clips” show in tv history.  Tony Dow and Jerry Mathers literally grew up before our very eyes on television each week … and such a nostalgic look back touched the hearts of all the viewers who grew up with them.  I always thought it was one of the best “real life” sitcoms on the air … but I digress!!!)

Chuck is right about "Peyton Place" airing twice a week (something I was unaware of … “Batman” was much more my cup of tea … or hot chocolate … at the time) and, for a brief period of time, it actually aired THREE times a week.  (kk)

LEAVE IT TO BEAVER:  More on its television legacy here:

I don’t believe I’ve ever seen the finale … Me-TV ran it on Thursday Morning (yesterday) at 7:30 Central and then on Friday (today), they ran the very FIRST episode of the series.

Fortunately, I found out about these in time to set the DVR timer to tape both episodes … so now I have something new and interesting to watch this weekend!

While reading Wednesday's FH, I was trying to remember offhand what records came out at the time featuring Batman.

There were the two instrumental versions by the Marketts and Neil Hefti.

Dickie Goodman had the break-in hit BATMAN AND HIS GRANDMOTHER in 1966, a record, I might add, that made it to #2 in the OKC area.

There was another break-in record, also in the year 1966, by Keyhole Peepers with a tune called KEYHOLE PEEPERS INTERVIEWS BATMAN & ROBIN.

Now Kent, there was another break-in type of record which I have but I can't remember offhand who did it.

Anyway, back in 1966, the success of BATMAN on television made its way onto vinyl.

One final thing and I would be careless if I didn't mention Jan and Dean's version as well.

“Batman And His Grandmother” was a big hit here in Chicago, too. (#9)

Their first hit single, “You Wouldn’t Listen,” was also released as by Batt Mann and the Boy Wonders!!!  (It was released on a couple of different local record labels before it finally clicked ... but it was the record released on Parrot Records by The Ides that cracked the charts in 1966.)  kk 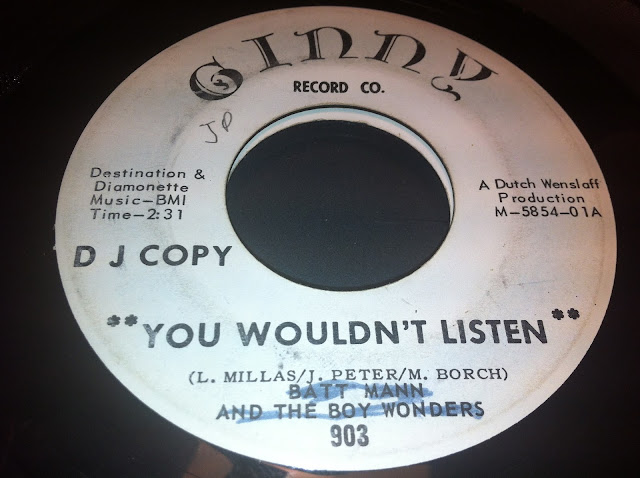 >>>Over the course of the series' 120 episodes, Robin delivered hundreds of Holy Bat Words.  (kk)

We were members of the Ron Riley Batman Club in ’66, too!

Yep, that was a big deal back then.  (In fact, I think people tend to forget just how HUGE Batman became, literally overnight.  (kk)

Before I was a crime-fighting publicist ... 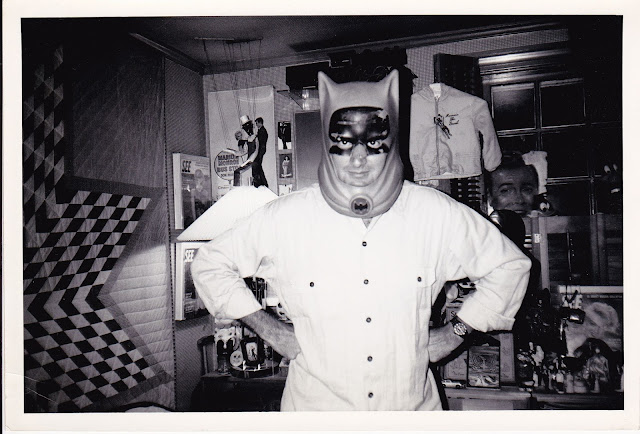 Look how I adapted my Junior High School graduation gown to allow for some comparisons to The Caped Crusader!!!  (kk) 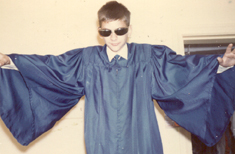 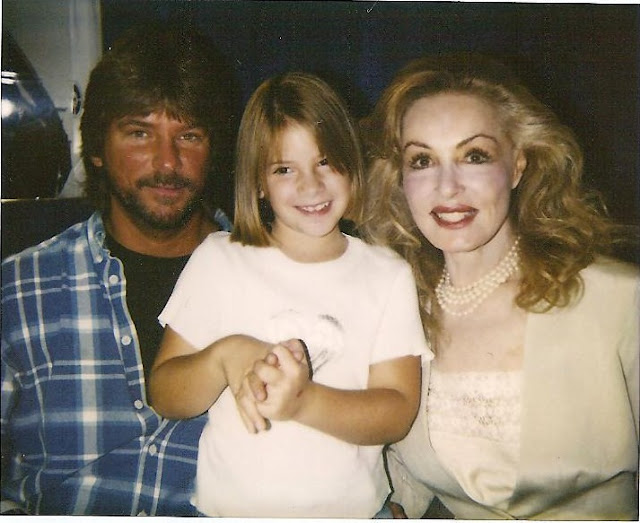 I had a similar run in a few years later at another Celebrity Show with Adam West (who was actually there with Van Williams, The Green Hornet) ... only this time you weren't allowed to take photos with the stars ... you could only BUY photos that they had brought along with them, which they would then sign for $30.

Ironically, there was one of Batman and Catwoman, in costume, that was pre-signed by Julie Newmar so that all Adam West had to do was add his signature to it.  I thought about it long and hard ... but ultimately decided that I could probably find some GENUINE collectibles there that that thirty bucks could have been applied to for a much happier reward!  (kk)

We told you before about the new film premiering on Amazon Prime this weekend called “One Night In Miami.”

The film depicts the incredible night in 1964 when four icons of sports, music, and activism gathered to celebrate one of the biggest upsets in boxing history.

The new film, directed by Regina King, premiers on TONIGHT on Amazon Prime … and we can’t wait to see it!  (kk)

Covid restrictions are due to relax a bit again here in Chicago beginning on Monday (I'm not so sure this is a good idea!) ... and FH Reader Chuck Buell gives us this update regarding other medical findings …

The World Health Organization announced that dogs cannot contact Covid-19 and therefore, any dogs being held in quarantine can now be released.

To be clear, WHO let the dogs out!

CB ( which stands for Canine Boy! )

Our new Forgotten Hits Buddy Brian Hyland will be guesting on Cousin Brucie’s program this Saturday Night … (Isn't this an awesome shot???) 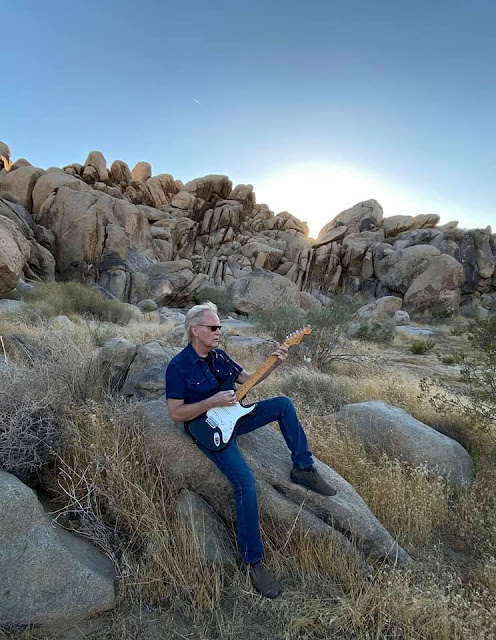 Cousins, this will be a really “Feel Good” visit.
Brian Hyland will be with us on the Air, Live.

His music filled our lives with happiness and Love. “Itsy Bitsy Teeny Weenie Yellow Polka Dot Bikini “and the romantic smash hit ballad “Sealed With A Kiss” filled the airwaves. His music to this day stays with us very vividly.

Brian released some new songs recently and is looking forward to our visit.

So Cousins, we have a date with Brian Hyland this Saturday with the Cuz on WABC MusicRadio. CLIP OF THE WEEK:

Chuck Buell takes it again with this one …

You very well may have already been made aware of this, Kent, but if not, I wonder if after watching this highly educational five minute video about the "Cloud," how confident you feel knowing 25-plus years of Forgotten Hits are stored there.