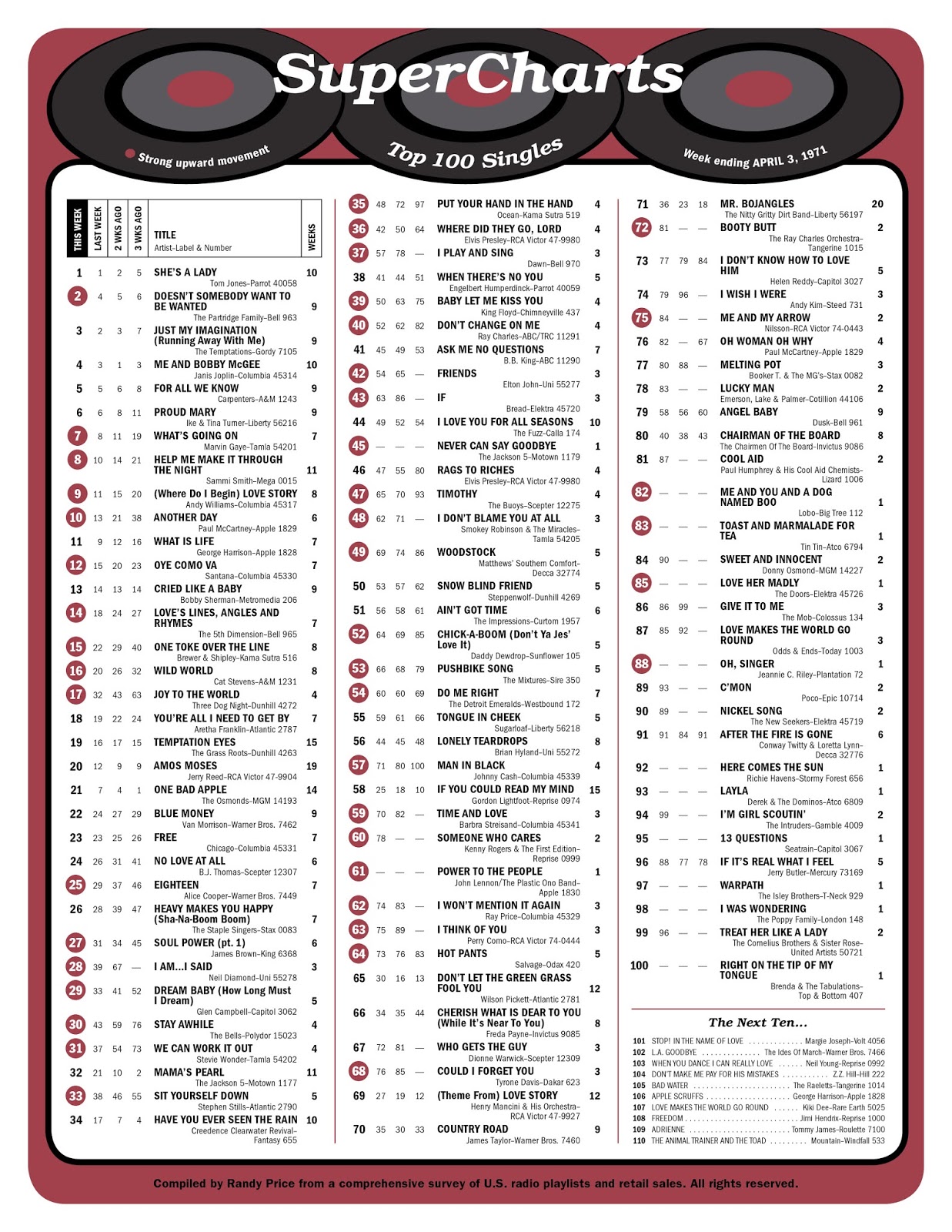 Ol' Mister Sock-In-The-Pants (and current coach on Great Britain's version of The Voice) hangs on to the #1 Spot for a second week with his Paul Anka-penned hit "She's A Lady" ... while The Partridge Family (led by David Cassidy, a guy who by all accounts never needed a sock-in-the-pants, as that area was massively filled out already)  moves into the #2 spot with "Doesn't Somebody Want To Be Wanted."  (This completes our anatomy lesson for today.)
"Just My Imagination" by The Temptations and "Me And Bobby McGee" by Janis Joplin each slide down a spot (to numbers 3 and 4 respectively), while "For All We Know" by The Carpenters and "Proud Mary" by Ike and Tina Turner hold on to their #5 and #6 showings from the week before.  The only two new entries into this week's Top Ten are Andy Williams ("(Where Do I Begin) Love Story") and Paul McCartney ("Another Day.")

The top debut this week belongs to The Jackson Five, who appear to be back in a VERY big way as their latest, "Never Can Say Goodbye," which premiers at #45.  (This one has become an absolute classic.)  Other big movers this week include "Friends" by Elton John (up 12 spots), "If" by Bread (up 20 spots), "Timothy" by The Buoys (up 18 spots), "I Don't Blame You At All" by Smokey Robinson and the Miracles (up 14 spots), "Woodstock" by Matthews' Southern Comfort (up 20 spots), "Chick-A-Boom" by Daddy Dewdrop (up 12 spots), "Pushbike Song" by The Mixtures (up 15 spots ... I don't even remember this one!!!  Does anybody else out there recall it?), "Man In Black" by Johnny Cash (up 14 spots), "Time And Love" by Barbra Streisand (up 11 spots), "Someone Who Cares" by Kenny Rogers and the First Edition (up 18 spots) and "I Won't Mention It Again" by Ray Price (up 12 spots) ... all of these records make moves of over ten places throughout the rest of the chart.

John Lennon debuts at #61 with "Power To The People," but I never particularly cared for this one.  In fact, at this point, Lennon's whole political pop stance was growing rather old for me.  Further down the chart, The Doors premier at #85 with their latest, "Love Her Madly."  I also didn't much care for Richie Havens' cover of the George Harrison / Beatles tune "Here Comes The Sun" ... but it would go on to become a hit in its own right (proving me wrong once again!)

Not making much of an impression, "Treat Her Like A Lady" by Cornelius Brothers and Sister Rose stumbles from #96 to #99 in only its second week on the charts.  Obviously, the song will make a strong rebound ... I swear I STILL hear this one on the radio nearly every single day, fifty years later!

"Never Can Say Goodbye" is the obvious pick this week ... it premiers at #45 on this week's chart.

I did like "Me And You And A Dog Named Boo," the first hit for Lobo ... it just sounded so different from anything else out there at the time ... and "Toast And Marmalade For Tea" by Tin Tin, a track produced by Maurice Gibb of The Bee Gees (and sounding VERY much like The Brothers Gibb themselves!)  Talk about your Forgotten Hits!!!

After "Bell Bottom Blues" fizzled for Derek and the Dominoes a few weeks back, they're back on the chart this week with the title cut from their album "Layla."  (This release was the abbreviated single version ... when the song was re-released a year later, record buyers got the full 7+ minute version.)

This Week in 1971:
March 28th – The final episode of The Ed Sullivan Show is broadcast on CBS.  It concludes the series' 23-year run.  (CBS cancelled the program the day after this episode aired.)

Sullivan was furious … and for good reason.  It was Sullivan’s program who brought acts like Elvis Presley and The Beatles into our living rooms.  An appearance on Ed’s show on Sunday night almost ensured a big spike in record sales the following week.  Often mocked and ridiculed, Old Stone Face introduced America to HUNDREDS of acts over the years by way of the true spirit of variety television.  Frequent guest comedian Alan King once said of Sullivan, “Ed does nothing … but it does it better than anyone else on television.”   He died three years later.  His final guests included Gladys Knight and the Pips.

Several tribute “best of” specials have aired over the years.  (In fact, you can still catch “The Best Of Ed Sullivan” every night, Monday thru Friday, on The Decades Channel.)

March 29th – US Army Lieutenant William Calley is found guilty of 22 murders in the My Lai Massacre.  He is sentenced to life imprisonment (but is later pardoned.)

March 30th – 28 year old Arlester “Dyke” Christian, lead singer of Dyke and the Blazers, who had two minor Top 40 Hits with “We Got More Soul” (#35, 1969) and “Let A Woman Be A Woman – Let A Man Be A Man” (#36, 1969) is shot to death in a bar in Phoenix, AZ.  Although the shooter was arraigned on murder charges, the case was delayed several times and eventually dismissed because of new evidence indicating self-defense.

Also on this date, Jimi Hendrix’s album “The Cry Of Love” is certified Gold … six months after his death 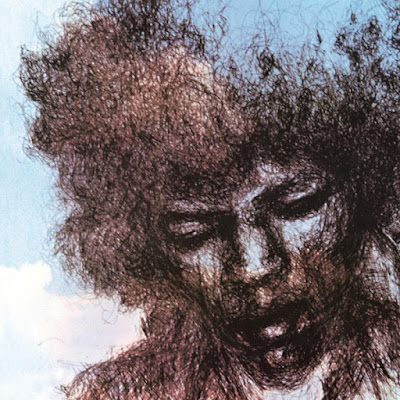 March 31st – Actor Ewan McGregor is born
Posted by Kent Kotal at 6:00 AM