As we predicted here a couple of weeks ago, the new Freddie Mercury / Queen biopic “Bohemian Rhapsody” has just become the second biggest music biopic in history, pushing past the Joaquin Phoenix / Johnny Cash flick “Walk The Line.”

Taking in another $15 million at the box office in week three, “Bohemian Rhapsody now stands at $127 million … which is still $35 million less that “Straight Outta Compton”’s total receipts … but hey, it’s early!  (When you factor in overseas box office receipts, it has actually PASSED “Straight Outta Compton,” with $384 million in worldwide sales to “Compton”’s $201 million.)

Queen music is ALSO doing extremely well with “Bohemian Rhapsody” (both the single and the soundtrack album) still climbing the charts. (The Beatles’ White Album, in the meantime looks to come in at #6 for the week once all the final sales are tabulated.  It was first expected to hit #1 … which was then revised to #4 … and now has dropped to #6 based on the latest statistics.  Watch for our overview of this hot new release in the days to come.)  kk


kk:
11/16/ 2018 =  Elvis Presley posthumously received the "Presidential Medal of Freedom," the nation’s highest civilian honor.
Elvis defined American Culture to billions of adoring fans around the world.
In the field of music, Elvis is only the third performer to posthumously receive this award. The other two are Meredith Wilson and Band Leader and Jazz great, Count Basie.
https://www.youtube.com/watch?v=cQB-vSmN0To
FB
A great honor, to be sure … and FINALLY a rare opportunity for millions of Americans to stand up together and say “See … Trump did SOMETHING right while he was in office!!!”  (kk)

When Joe Perry collapsed onstage at the Billy Joel / Madison Square Garden concert last week, he was rushed to the hospital, saying simply that he didn’t feel well.  (Perry collapsed at another show a couple of years ago with The Hollywood Vampires, also stating that he “felt unwell” … so fans of the Aerosmith guitarist became concerned.)

Still, based on past experiences, I don’t think that anyone was expecting this incident to be quite so serious … however when reports began circulating that Perry died at a New York hospital, we received several emails from concerned fans.  Fact is, it’s all apparently just been a hoax … and a pretty sick onte at that.  Perry is alive (and semi-well) and planning to return to the concert stage next month.  (kk)

kk:
Scott Shannon hosted a Radio Hall of Fame event last night.  He stayed at a hotel in the city, instead of going home.  Scott said it took him two hours to travel from his hotel to the event he was hosting, eleven blocks away.  A lot of listeners were saying it took them over five hours to get home.
Frank B.


I’ve only been to New York City one time and it was many years ago.  Not knowing any better, I booked a three day stay downtown.  As we were driving to the hotel, we accidently passed it because we couldn’t get over to the left lane fast enough to make the turn … so I had to go around the block in order to hit it again.  That four block square took just over one hour to do … and then when we got to the hotel we were told that the room didn’t include overnight parking … so we had to pay $35 (in 1976 dollars so probably at least $100 in today’s money!  Actually, it’s more like $155 … I just looked it up!) to leave our car for the night … and that was without any “in and out” privileges … so we ended up just eating dinner at the hotel!  Needless to say, we checked out the very next morning and stayed across the bridge in New Jersey at a fraction of the cost (save the daily bridge toll) for the rest of our stay.

We told you about that Hall Of Fame Ceremony a couple of months ago because we were so proud that Jonathon Brandmeier was being honored.  Johnny B was all the rage here in Chicago in the early ‘80’s … a real “must listen” every morning on The Loop. 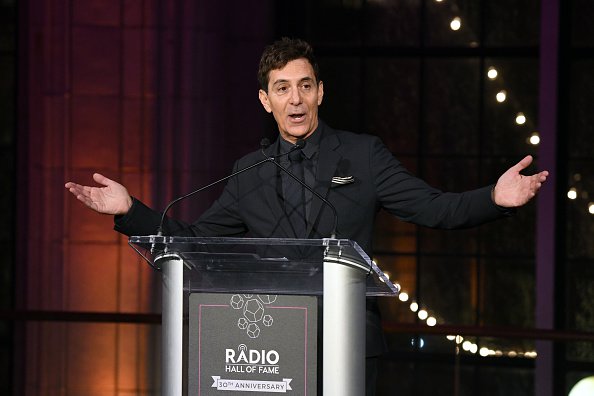