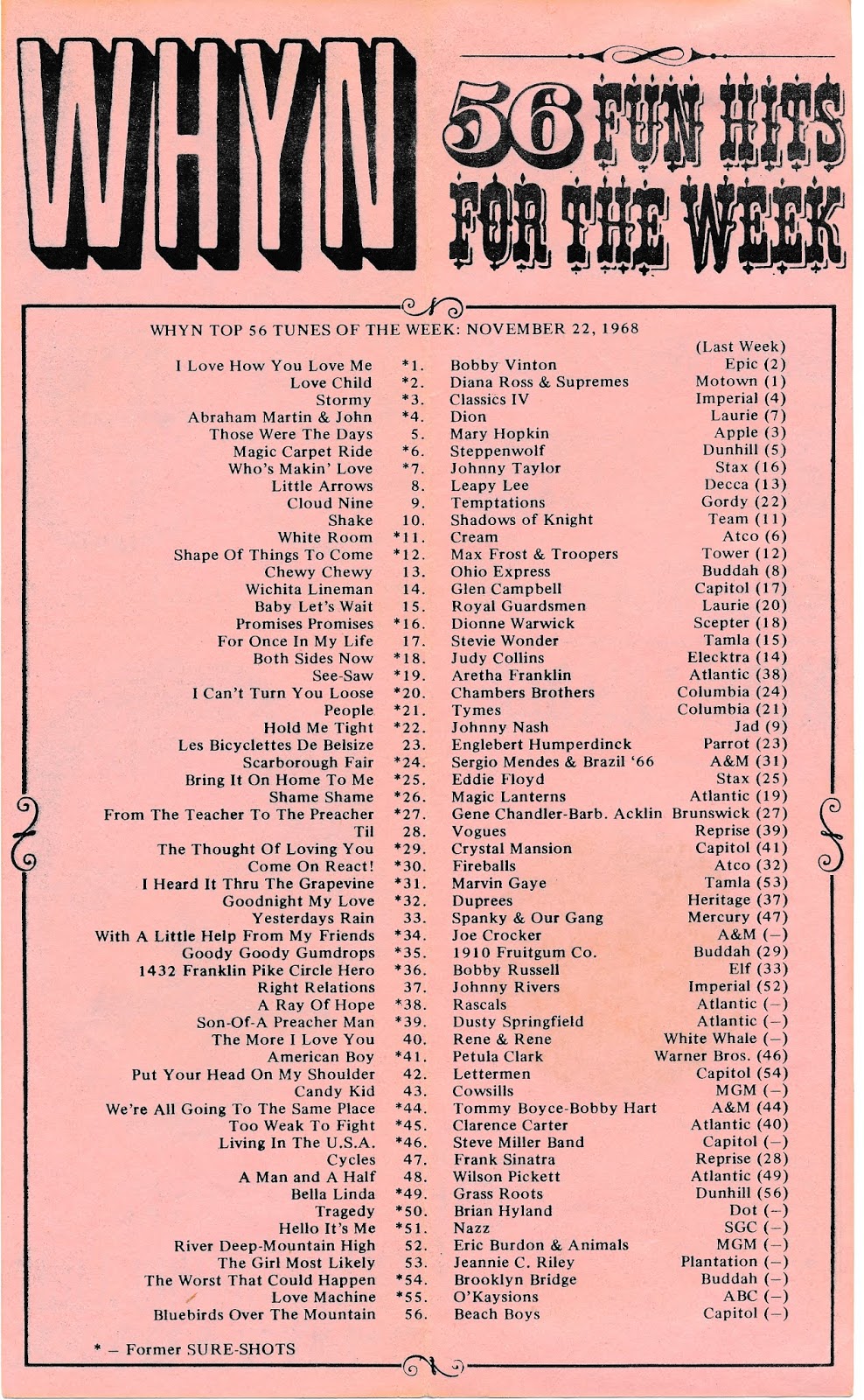 Springfield rates as one of (or maybe the?) oldest cities on our radio journey of 1968, being founded in 1636, nearly 4 centuries ago. WHYN probably had quite a listener draw between Springfield listeners and the state's capital, Hartford, being only 24 miles south.  The survey certainly showed that Springfield was still exploring by listing nearly 60 songs weekly on their chart for years in the 60's and 70's.  Along with a VERY unique way of listing the entries, the survey certainly allowed for LOTS of great obscurities to be heard throughout the northeastern states.

One of my favorite obscure tracks appears at #37, Johnny Rivers' "Right Relations."  Despite Billboard pushing it as their ONLY Top 20 prediction a few weeks earlier (11-2) and a high debut at #63 on the Hot 100, the 45 not only stiffed in the following weeks, but seems to have been stiffed by Johnny as well, as the song almost NEVER shows up anywhere in reissue.  I love it and present it here with FH'er Chuck Buell presenting in on WLS that November 50 years back.

Another oddity is #44, Tommy Boyce & Bobby Hart's "We're All Going to the Same Place."  It was predicted top 60 in the same issue as Billboard's above pick.  Bad week Joel W's guys, I guess?  Shockingly, this record ended the duo's nice run of national hits for good, as the song and duo would never chart the Hot 100 again!  It's as if the Monkees and B&H fans departed on the same train in 1968.  Doom and gloom lyrics would soon end the Cowsills chartings also in 1969 with "The Prophecy of Daniel & John the Devine."  Yet, "2525" was huge?

And here's the very rare stereo version of "Right Relations" without the messy beginning note found on the 45 AND Chuck Buell mentioning as a WLS Exclusive.
-- Clark Besch


When you list 56 tracks on your weekly survey, you're going to have some unexpected gems that you typically won't find on your average, run-of-the-mill weekly charts.

For example, when's the last time you heard "American Boys" by Petula Clark?!?!


And how often did you hear Joe Cocker's version of "With A Little Help From My Friends" BEFORE he performed it at Woodstock???  (It's still my all-time favorite Beatles cover ever!)  Yet here it is, brand new on the chart this week, debuting at #34.


A little surprising to see Bobby Vinton's "I Love How You Love Me" topping a chart that also includes Cream, Joe Cocker, Steppenwolf and The Chambers Brothers.  (Ahhh ... the '60's!!!)

The Jimi Hendrix Experience Album “Electric Ladyland” reaches #1 on the US Chart, where it will stay for two weeks.

Randy Meisner, Jim Messina, Richie Furay and Rusty Young debut at The Troubadour tonight performing under their new name Pogo.  They would shortly have to change their name, however, when Pogo comic strip creator Walt Kelly filed a lawsuit for the use of the name of his classic, beloved character.  Without missing a beat, they quickly changed their name to POCO because it sounded close enough to their original choice that they knew their ever-growing fan base would continue to follow them.  Today they are considered to be one of the premier pioneer bands of blending folk, country and rock and each of these players has been attached to some of the biggest names in rock through the years.

The Spiral Starecase record their hit “More Today Than Yesterday,” which will reach #12 on the pop charts next May.  The tune still holds up incredibly well today (and, fifty years later, you can still hear it just about every single day on oldies and soft rock radio stations around the world.)

11/19/68 – During an appearance at The Royal Command Variety Performance in London, Diana Ross interrupts the show to request a plea for interracial understanding.  The audience … which includes members of The Royal Family … applaud for two minutes.

11/21/68 – Yoko Ono suffers a miscarriage.  The baby, a boy, was named John Ono Lennon II after his father and later buried at a secret location.

11/22/68 – “The Beatles” (aka “The White Album”) double LP is released … The Beatles’ first album release on their own Apple Records label.
[Don't miss our tributes to The Beatles' White Album ... both a 40 year, track by track review and our recent piece on what this might have sounded like as a single LP.]
http://forgottenhits.com/forgotten_hits_salutes_the_40th_anniversary_of_the_beatles_white_album

11/24/68 - Dusty Springfield performs “Son Of A Preacher Man” and Nancy Wilson sings “Face It Girl, It’s Over” on The Ed Sullivan Show
Posted by Kent Kotal at 6:00 AM