Have you guys seen the new Verizon / Group FaceTime commercial featuring the different Elvis Impersonators from around the world who all come together to sing the truly obscure Elvis hit “There’s Always Me” from 1967?  (Here again, you’ve just got to wonder who on earth came up with the idea of using THIS song!!!)


Although it was released as a single in ’67 (peaking at #45 in Cash Box and #56 in Billboard), the track was actually recorded several years earlier and first released on Elvis’ “Something For Everybody” album in 1961!  Released as a Gold Standard single to fill the gaps between Elvis’ next planned single (“Big Boss Man” / “You Don’t Know Me,” both from the soundtrack album for the film “Clambake”) it didn’t do much to spark new interest in the material The King was recording these days.  (Tracks like “Guitar Man” and “Big Boss Man” SHOULD have sparked some renewed interest in Elvis’ career ... but that wouldn’t happen for another year until his 1968 NBC Singer Comeback Television Special.  It’s no coincidence that Elvis performed both of the songs on the special.)  kk


Reading your recent “Coming Soon To A Venue Near You” feature prompts me to write about the excellent show I saw in Peekskill, NY last night -- Lindsey Buckingham.
Whereas certain performers need occasional help reaching some notes, Lindsay Buckingham needed NONE.  He sounded just as raw as his "Rumours" days with ... oh, what's the name of that band? ...
And Lindsey's guitar playing ... absolutely on fire.
The four-member backing band / vocalists must be given props as well. I know it's often impossible for a band to tour without ALL its original members who made the hit records, so we've no choice but to let that slide. In Fleetwood Mac's case, all five of those members are still around, however.  For my money, let Stevie sing "Rhiannon", let Christie rock "Little Lies" -- I prefer to hear "Go Your Own Way" sung by the man who helped make the Mac, and not a Split End.
Also keep an ear out for opening act J.S Ondara ... this native Kenyan reminded me vocally of ... David Gray!? One to watch.
Sam Tallerico

Just by chance, I tuned across KFOR locally and the "Ground Zero" show, which is syndicated late night here.  It's always a hodgepodge of crazy, silly stuff and I seldom listen, but last night they had Dr Demento on talking about Christmas songs and such.  If you wish, you can download the podcast and listen to that show here:
https://www.groundzeromedia.org/podcasts/
It is the top show listed, "Carol of the Chills."  They talk about how Christmas songs are getting ridiculed for being politically incorrect these days such as "Rudolph" being a bullying song and "Baby It’s Cold Outside" being terrible as far as solicitating women.  They play a funny altered version where the GUY wants her to leave and she keeps singing about leaving but doesn't.  Also a funny mash up of "Paranoid" with one of Dean Martin's Christmas songs that works pretty fair.  Funny stuff, mostly.  Good to hear the old Dr. still going!
Clark Besch

Is “Baby, It’s Cold Outside” really too offensive to play in 2018?
Broadway Bill of WCBS-FM was interviewed for this story.
FB
https://newyork.cbslocal.com/2018/12/04/is-baby-its-cold-outside-really-too-offensive-to-play-in-2018/?fbclid=IwAR0sed9Tf4oMWZTJfn8zWWm4ig2kEqlh5c7j6aiGPHtuoVw2R3ap93wgk3E
(For whatever it's worth, Frannie and I heard "Baby, It's Cold Outside" played Saturday Night at the Olive Garden ... I don't think this song is going anywhere!)  kk

Without question, one of the key scenes in the hot new Queen / Freddie Mercury biopic is Queen’s show-stopping performance at Live Aid.  (Yes, it’s our weekly Queen Buzzfeed!  Lol  Or so it seems!)
As linked here before … https://www.youtube.com/watch?v=A22oy8dFjqc … they did an incredible job of recreating this once-in-a-lifetime event … but DIDJAKNOW that they also created that entire 22 minute sequence in one take?!?!?
Perhaps even more incredibly, the Live Aid performance was the first thing they filmed for the movie!  They originally tried to film the event one song at a time … almost as separate videos … which they then planned to edit together into a smooth transition  (Day One was “Bohemian Rhapsody” … Day Two was “Radio Ga-Ga”) … but after capturing a couple of songs on film, Rami Malek, the actor portraying Freddie Mercury (and already generating all kinds of Oscar buzz) approached Producer Graham King and expressed his concern that his performance of the individual songs lacked the required energy of such a major, emotional event.  He asked for an additional day of shooting where they could film the actors running through the entire 22-minute set and then edit from there as necessary … at least this would capture the continuity of the real concert event.
In a recent interview, discussing the film before a live audience in New York, Malek said “I was somewhat prepared, but no one can ever prepare you for what that feeling was like.  What some consider the greatest performance in rock history was a challenge. I said, ‘What the hell, they built the stage, let’s do this.'”
He went on to say  that although "It was supposed to be a rehearsal day, everyone was in costume, so I was very suspicious. … I had a certain confidence from working on long shots on ‘Mr. Robot’ (Malek’s earlier television series) that gave me the ability to calm down. It was sink or swim, a baptism by fire.  We brought in three cranes with cameras and ran the entire 22-minute set.  It was the best take we ever did. You’re running on pure adrenaline. My heart is pounding just thinking about it. You realize how much adrenaline was coursing through [Mercury’s] veins before 75,000 people. Really, I love acting. To add into this rock star feeling, it was like being on drugs.”
Incredible!  (kk)

Speaking of the new Queen flick, Brian May spoke out publicly last week about the “uncasting” of Sasha Baron Cohen in the Freddie Mercury role.
I have mentioned before that upon first hearing the news, I was THRILLED and excited to see what he would do with the role.  But within the first ten minutes of “Bohemian Rhapsody” it was clear that Rami Malek was born to play this part.  NOBODY else could have possibly pulled it off to the extent that he did.
Here’s a recap of May’s comments regarding the dumping of Borat in favor of I Robot …
http://ultimateclassicrock.com/brian-may-sacha-baron-cohen-freddie-mercury/?utm_source=sailthru&utm_medium=referral&utm_campaign=newsletter_4572276

Monkee Micky Dolenz was in New York City last week tub-thumping The Monkees Christmas Party (Rhino) album, and stopped by to visit with Gilbert Gottfried for his Amazing Colossal Podcast on Earwolf. It was a repeat performance, as Dolenz had done it three years ago to much success. Micky is seen here with Gottfried (left) and co-host Frank Santopadre (right). 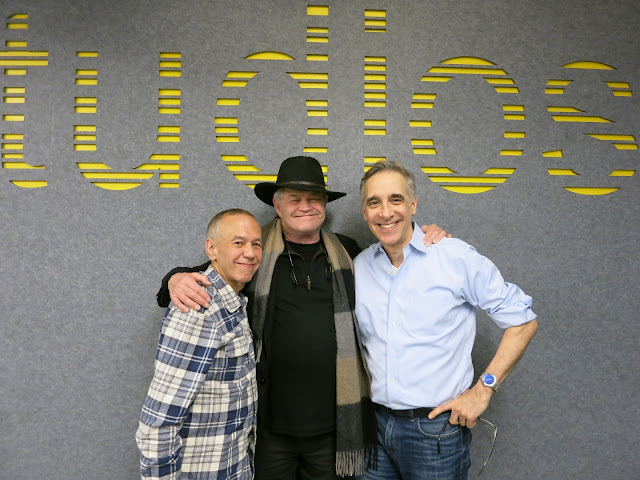 He also was up at SiriusXM where he did the Volume Show with Lori Majewski. (Lori Majewski and Dolenz). 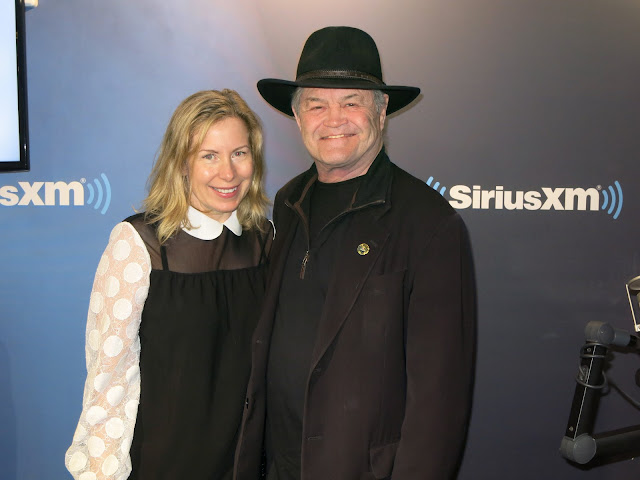 Forgotten Hits Regular Frank B. tells us about the passing of two other early ‘60’s stars …

12/7/2018 = R.I.P. Charles Weldon
Charles was lead singer of the 1960 One Hit Wonder group The Paradons, from Bakersfield, California, who had the hit "Diamonds And Pearls."  He went on to become an actor.

For anyone from the Philadelphia area who may remember a one-off single (minor local hit)  c. 1959 - 60 by the Identicals, "Jamie" / "Dreaming of You" (they were my first cousins, identical twins), I'm sad to report that Evie Wartell just passed away last night. Her twin sister, Shelly, passed away a couple of years ago.  They were only about 12 or 13 years old when they recorded it. They were on the Firebird label and produced by the famous Jimmy Wisner.
-"Bruce Scott" Wartell
https://www.youtube.com/watch?v=oQMdr1JbSGQ
Posted by Kent Kotal at 6:00 AM