This tune actually moves up a few places on our 2020 TV Themes Favorites list and rides into the #2 position.

The first big, full color western, Bonanza was a ratings bonanza for YEARS!

Roberts … son Adam … and always my favorite … left after six seasons … he’d show up twenty years later as Trapper John, M.D. … but Ben (Pa), Hoss and Little Joe carried on thru the duration of the series … an incredible fourteen seasons. (It started back in 1959 … and running all the way through 1973!)

I would be bold enough to say that Bonanza probably helped sell more color TVs than any source of advertising in history … people wanted to see the beautiful countryside in color!

The Bonanza theme became a Top 20 Hit for Al Caiola in 1961. Lorne Green released a “sung” (recited) version as well … but it never matched the success of his #1 Hit “Ringo” from 1964.  (Pernell Roberts and Michael Landon also took stabs at singing careers ... without success.) 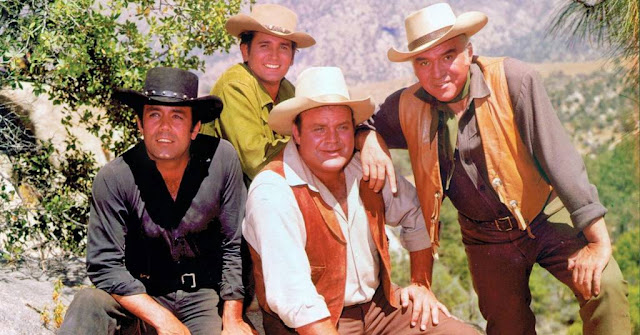