The pilot for Happy Days aired as part of the popular television series Love, American Style. (You saw that theme back at #42 … in fact, we even showed the clip of this specific episode.  Scroll back to check it out if you missed it earlier.)

“Love And The Happy Days” introduced the world to Ritchie Cunningham and his best friend, Potsie Weber, and owed as much to the success of the film “American Graffiti” as it did to the fact that Ron Howard had starred in both … and was already a household name after his eight years of playing Opie Taylor on The Andy Griffith Show. (Who can forget Eddie Murphy’s Saturday Night Live bit … “Opie Cunningham! Opie Cunningham!”

Howard, of course, became a very successful movie director and producer … but Happy Days might best be remembered for launching the career of Henry Winkler … The Fonz … who became an overnight sensation and carried the show for many of its years on tv. (It’s a well-know fact that Fonzie’s leather jacket sits in The Smithsonian Institute!  But it's also a well-known fact that after the series overstayed its welcome, they were prone to try ANYTHING to keep audiences coming back for more ... and, in the process, unknowingly created the television phrase "jump the shark" for one particularly ridiculous Fonzie episode.)

Happy Days aired Bill Haley and the Comets’ #1 Hit “Rock Around The Clock” for its first two seasons … until the duo of Pratt and McClain recorded the program’s own unique theme.

Their recording of “Happy Days” topped the charts in many markets across the country … but officially peaked at #5 in Billboard Magazine.

While we did receive a couple of votes for “Rock Around The Clock” (as in exactly two!), it’s the “Happy Days” theme that ranks at #14 in this year’s countdown. That’s actually up a notch from its previous showing. 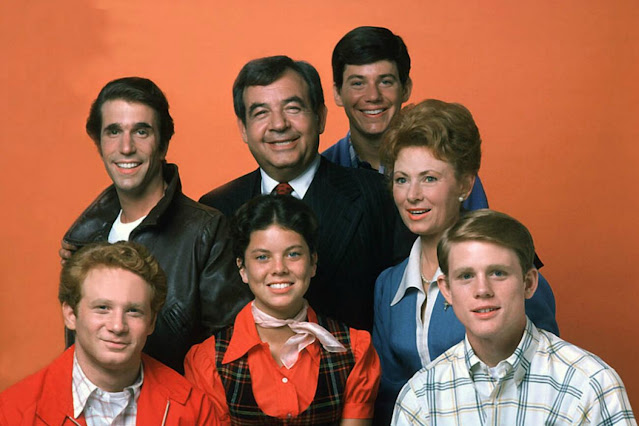