A minor hit (#83) for singer / songwriter Gary Portnoy in 1983, the theme from Cheers (“Where Everybody Knows Your Name”) became one of those immediately recognizable, HAD to sing along with tv themes that they just don’t seem to make anymore. (You’ll notice as you make your way thru the list that there aren’t a lot of titles shown from the past thirty years.)

Cheers ran for eleven seasons on NBC and, despite NUMEROUS cast changes, just seemed to roll with the punches and improve.

It ultimately produced the spin-off Frasier, starring Kelsey Grammer ... (Frasier's theme earned 56 votes and came in at #132), but for most of us it was the talents of Ted Danson and Shelley Long … and then Kirstie Alley ... Rhea Perlman, George Wendt and John Ratzenberger, Nicholas Colasanto and then Woody Harrelson … and Bebe Neuwirth that never failed to delight us. 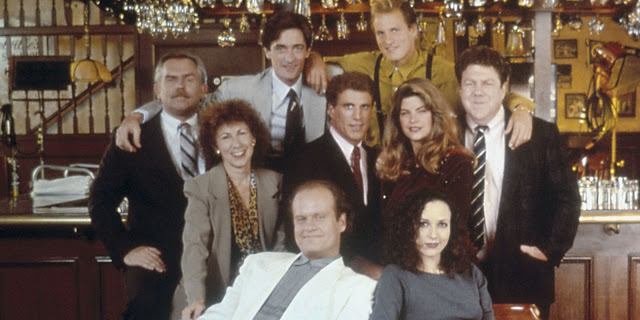