CBS changed their whole TV line-up after the success of this show!

All of a sudden, rural comedies were in …

and all three of these themes earned enough votes to make The Top 50.

The Ballad of Jed Clampett by the country comedy duo of Flatt and Scruggs rose to #44 on Billboard’s Hot 100 Pop Singles Chart in early 1963. (The show premiered in September of ’62 … and lasted for nine seasons.)

The theme song tells you the whole story of their rise to fortune … Ol’ Jed was out huntin’ for some food, missed his prey and struck oil.

Soon the whole family: Jed (Buddy Ebsen) Granny (Irene Ryan) Elly May (Donna Douglas) and cousin Jethro Bodine (Max Baer, Jr., son of the boxing great) were headed off to Beverly Hills and their brand new mansion … with the cee-ment pond and more luxuries than they could possibly understand.

Banker “Mr. Drysdale” and his assistant “Miss Jane” Hathaway were also regularly featured ... as were any number of Elly May’s critters.

This is another ‘60’s television series that spawned a motion picture a couple of decades later with rubber-faced comedian Jim Varney playing the Jed Clampett role.

The theme from The Beverly Hillbillies was your #7 favorite in 2013 … and still makes The Top Ten this year, coming in at #9. 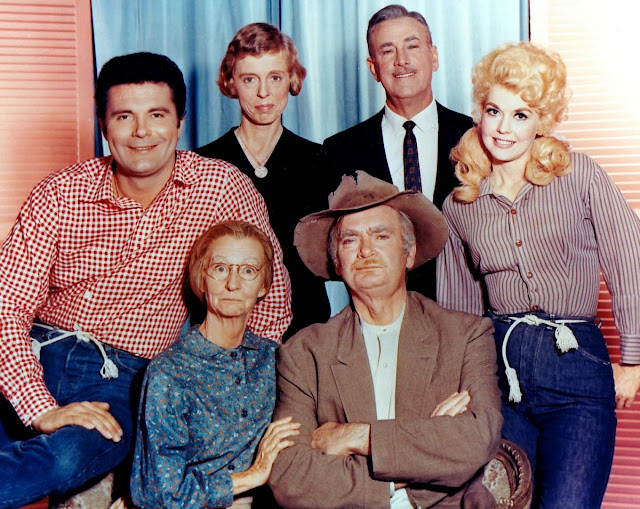