Kenny Rogers and the First Edition - Part 2 (Making It)

The First Edition found their first hit courtesy of singer / songwriter Mickey Newbury who, legend has it, previously had offered the song to Jerry Lee Lewis, who turned it down flat. It was quite a departure for a group of singers who a few months ago were singing traditional folk songs with an almost "Up With People" persona. (And, for Kenny Rogers, it wasn't exactly jazz either!)

The drug-oriented, psychedelic-feeling song (it ranked at #12 in Our Top 20 All-Time Favorite Psychedelic Songs Poll a few years ago ... not bad for a country boy!) opened with a backwards guitar riff, played by Glen Campbell, who was still doing session work at the time. (Ironically, a year later Campbell won the Best Album Of The Year Grammy for "By The Time I Get To Phoenix" as his own recording career kicked into high gear.) In yet another example of all of these connections tying together, a year later, "The Glen Campbell Goodtime Hour" would become the summer replacement series for "The Smothers Brothers Comedy Hour".


In our Psychedelic Favorites spotlight, we saluted The First Edition thusly:

Kenny was disenchanted singing other people's hits with The New Christy Minstrels ... and opening for acts like Dinah Shore in Las Vegas ... so he decided to form his OWN group, using the money he earned from songwriting royalties for an Eddy Arnold hit, "Don't Laugh At My Love". Rogers convinced fellow Minstrels Mike Settle, Terry Williams and Thelma Camacho to join him in this new venture and one night, while performing at Ledbetter's in Los Angeles (a club ironically owned by The New Christy Minstrels founder, Randy Sparks), they were seen by The Smothers Brothers' Manager Ken Kragen, who quickly signed them to a development deal. Auditioning for renown producer Jimmy Bowen, they were then signed to Frank Sinatra's Reprise Records label and, with Ken Kragen in their corner, made their television debut as The First Edition on The Smothers Brothers Comedy Hour in December of 1967.

Two months later, their first hit, the pseudo-psychedelic sounding "Just Dropped In", was on its way to the #3 on the pop chart.  Sounding NOTHING at all like anything else that they would go on to record, the record was most certainly recorded in an effort to capture the sound "of the times" ... and it worked. Although the rest of their chart hits would strongly favor the country sound, "Just Dropped In" was a HUGE smash. (Amazingly, their other '60's hits did not perform well on the country charts, despite their definite leanings in that direction. Kenny Rogers would not become a Country Music Superstar until he told the tale of Lucille's "four hundred children" ten years later ... oh ... it's four HUNGRY children!!! I've ALWAYS gotten that line wrong!)

The First Edition's follow-up hit, "But You Know I Love You" (#15, 1969), featured more of a group-ensemble vocal, wrapped around Kenny's lead ... and a much more country-oriented arrangement. It was on the group's third chart single that Kenny's name moved up front ahead of the rest of the band ... "Ruby, Don't Take Your Love To Town" was officially released as by Kenny Rogers and the First Edition ... and it went all the way to #6.

FOR THE RECORD: Contrary to what Kenny Rogers has told anyone who would listen for the past 37 years, "Just Dropped In" (released as a single in 1968) was NOT the first record to ever feature backwards guitar!!! (According to Kenny, I guess that all the Beatles stuff released during the previous two years didn't really count!)

DIDJAKNOW?-1: That "ground-breaking" backwards lead guitar was played by none other than Glen Campbell, one of the most successful studio musicians of all time. Amazingly, he was already on the way to getting his own solo career off the ground, yet was still fitting in those very lucrative studio sessions ... and, I'm sure it's no small coincidence that The Glen Campbell Goodtime Hour would become the summer replacement series for The Smothers Comedy Brothers Hour a year later!!! (Don'tcha just love it when this stuff all ties in together???) We featured Glen Campbell earlier in our Forgotten Hits / Psychedelic Music Countdown in yet another one of his "side jobs" ... Glen was the lead vocalist on the Sagittarius hit "My World Fell Down".

DIDJAKNOW?-2: When "Just Dropped In" was written (by country songwriter Mickey Newbury), it was first offered to Jerry Lee Lewis, who turned the song down flat!

DIDJAKNOW?-3: A Boston radio station began playing "Ruby, Don't Take Your Love To Town" as an album track while "But You Know I Love You" was still on the charts. To avoid confusion (and jeopardizing the momentum of another hit single still climbing the charts), the record label decided to issue it as a single under the new moniker Kenny Rogers and the First Edition in an effort to avoid competing with themselves on the charts!  (It wasn't likely that radio was going to play TWO songs by a brand new, up-start group at the same time ... but that's exactly what they did!)  Originally written about the Korean War (by Country Music Superstar M-M-Mel Tillis), the song tapped in to all the focus pertaining to what was going on in Viet Nam at the time and struck a nerve with the youth of America, returning Kenny Rogers and the First Edition to The National Top Ten.

DIDJAKNOW?-4: In 1969, it was decided that the group should be permanently renamed Kenny Rogers and the First Edition because of all the attention he was receiving as the principal vocalist. It may only be a coincidence, but right around the same time, Thelma Camacho quit the group and was replaced by Mary Arnold.

DIDJAKNOW?-5: Reportedly, one of the girls who FAILED the audition to take Camacho's spot was Karen Carpenter!!! Mary Arnold, who won the gig, was, at one time, Camacho's roommate but didn't feel right auditioning until Thelma gave it her blessing. She did ... and Arnold ultimately replaced her in the group. (Why not? She already knew all of the songs!!!) 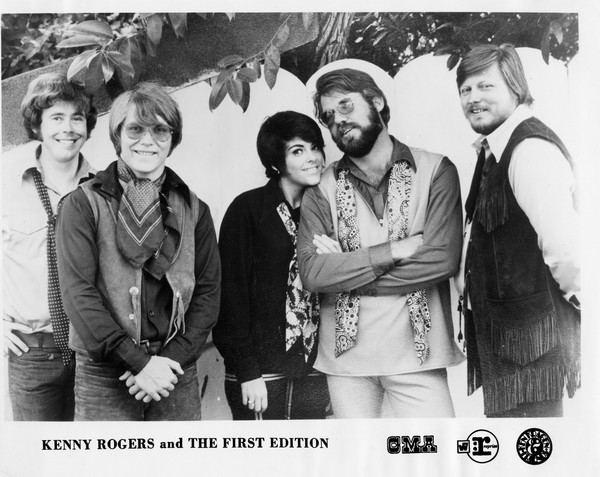