"But You Know I Love You", The First Edition's follow-up hit to "Just Dropped In" peaked at #15 and, in addition to Kenny's vocal also featured, almost as prominently, Thelma Camacho on vocals. (Quite honestly, I seem to remember Thelma being much more of the focal point when you'd see The First Edition perform on TV. Yes, Kenny may have been the lead singer, but the cameras always seemed to find their way over to Thelma whenver the group was performing. See our Ed Sullivan feature below for more on this.) Perhaps more importantly, "But You Know I Love You" was written by Mike Settle, which was an important step in the band's evolution ... as this is what prompted them to break away from The New Christy Minstrels in the first place.


Kenny Rogers remembers the first time he and The First Edition appeared on The Ed Sullivan Show:

When The First Edition first started out (springing away from The New Christy Minstrels) they were, in all senses, a "group" effort ... Kenny wouldn't be singled out and have his name inserted in front of the group's name until a couple of years later ... and, even then, it was only done as a marketing ploy to allow "Ruby, Don't Take Your Love To Town" to compete on the charts against a single already credited to The First Edition. In fact, prior to Kenny stepping up front, some might argue that female vocalist Thelma Camacho was the main focal point of the band on stage ...

Thelma Camacho was this hot little lady with the pixie haircut. Everyone who met her fell in love with her. That probably explains what happened to us during an appearance on "The Ed Sullivan Show". Our manager, Ken Kragen, had been trying to make The First Edition into a house-hold name and we were all excited to be doing "Sullivan", then the number one variety show on TV.
We had a rehearsal in the afternoon and it went fine. "Ladies and gentlemen, please welcome The First Edition," Ed said, and we came out and did our song. The second go-round, for the actual nighttime show, he says, "Ladies and gentlemen, please welcome ..." ... and he couldn't remember the name ... so he says, "Thelma and her boys!" So much for name recognition.
-- Kenny Rogers


Ironically, "But You Know I Love You" would later become a country hit for Dolly Parton, who would duet with Kenny Rogers on one of the biggest hits of the early '80's, the Bee Gees-penned "Islands In The Stream". Kenny and Dolly would go on to record several albums together, as well as tour and costar in numerous television specials.

In 1969, it was decided that the group should be renamed Kenny Rogers and the First Edition because of all of the attention he was receiving as the principal vocalist. It may only be a coincidence, but around the same time Thelma Camacho quit the group and was replaced by Mary Arnold. (Reportedly, one of the girl singers who failed the audition to take Camacho's spot was Karen Carpenter!!! While Kenny remembers this being the case ... and acknowledges that Karen was a phenomenal singer ... he also readily responds that her voice just wasn't suited to the type of material that The First Edition were recording ... and to this degree he is absolutely correct. Thankfully, the world wasn't cheated out of the hits of The Carpenters as a result of this decision!) Ultimately, it was Thelma's roommate Mary Arnold who took her spot. (Mary wouldn't consider auditioning until Thelma gave it her blessing, which she graciously did.)

In his new book "Luck Or Something Like It", Rogers says that Thelma was let go from the band. "She was conflicted about touring. I'm not sure she wasn't happy about our decision. She was tired of traveling and had fallen in love, so I don't think it came as much of a shock or disappointment to her."  The other version of the story probably just played better in the press ... like I said earlier, Thelma was considered a focal point in the band.

Kenny describes Mary's joining the band:
"Thelma had a roommate for the last two years of her tenure with us named Mary Arnold. We all knew her and liked her very much. Sensing our frustration, Mary spoke up one day and said 'Can I try? Believe me, I know these songs backward and forward.' We were all a little taken aback by Mary's request, not remembering that she had heard all our songs every day for two years and had previously been with a group called The Young Americans. She knew her way around a stage. Mary came in for literally one rehearsal and started doing shows with us right away. She picked up right where Thelma left off. What a lifesaver she was. Mary would eventually marry a man I introduced her to, the legendary singer-songwriter Roger Miller. They were still together when he passed away." 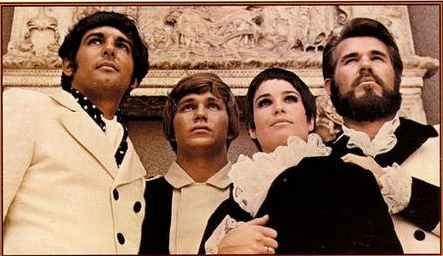 Kenny Rogers steps up front ... and The First Edition have their most memorable hit.

A VALENTINE'S DAY BONUS:
Could there be a more appropriate song for Valentine's Day than Paul McCartney's "My Valentine" from last year's "Kisses On The Bottom" album???

And, while we're at it, I thought I'd also share one of my all-time favorite love songs, too!