Longtime Forgotten Hits Reader Bill Hengels (he's the guy who's been supplying us with those pristine copies of the old WLS Charts we've been running every Friday) just sent us THIS interesting article pertaining to the 40th Anniversary of Woodstock.

One glance at this photo and you'll know IMMEDIATELY who we're talking about. It's been etched in our brains for nearly 40 years now!!! Enjoy!

I saw this last week in the papers. Thought it was timely for the article! 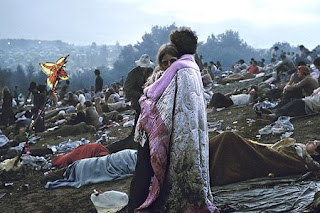 Love in 1969: Nick and Bobbi Ercoline were immortalized on the cover

of the original 'Woodstock' album in 1970, as well as on the movie poster. 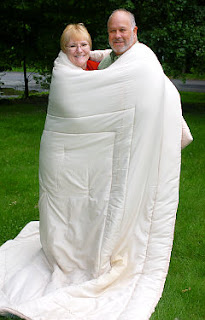 Of all the images snapped during the original Woodstock weekend, one stands above all: a young couple huddled together in a blanket, standing alone in a sea of people lying on wet ground.

It's an enduring image of love, care and protection that earned iconic status through its placement on the cover of the original "Woodstock" album in 1970, as well as on the movie poster.

Forty years later, the couple in the photo - Nick and Bobbi Ercoline, both 60 - remain together. They married two summers after the fabled weekend, and they still live less than an hour's drive from the original concert site of Bethel, N.Y., and within spitting distance of where they both grew up.

Nick Ercoline works for the Orange County, N.Y., Department of Housing. Bobbi is a resident nurse at the elementary school in their hometown of Pine Bush.
The 40th anniversary of the ultimate hippie be-in, this Aug. 15-17, has thrown the Ercolines into the spotlight again - something they never expected or sought.
They say they remember nothing of the original shot, taken by Burk Uzzle. "We weren't striking a pose," Nick says. "We were as surprised as everybody to see that photo on the album cover."

They discovered it while at a friend's house listening to the album and passing around the gatefold jacket. First, Nick recognized the famous yellow butterfly staff in the left corner. "It belonged to this guy Herbie," Nick says. "We latched on to him that day because he was having a very bad experience. He was tripping pretty heavily and he had lost his friends. After I saw that staff I said, 'Hey that's our blanket.' Then I said, 'Hey, that's us.'"

Bobbi, then 20, wasn't overly impressed. "Woodstock was over and done with at that time," she says. "It didn't seem like a big deal. The only thing was that then I had to tell my mother I had gone. She didn't know. But by then, she didn't mind."

The two had arrived in the middle of the weekend, a rare feat given that all main roads were closed by then. "We were local kids, so we knew the back roads," Nick says. "About 5 miles away we abandoned this big white 1965 Chevrolet Impala station wagon."

The two didn't realize the impact their photo had until Woodstock's 20th anniversary, when the world's media began seeking them out. In fact, their memories of the original event have more to do with the scene than the music, because they were too far away to hear or see much.

"I remember the rain, the lack of toilets and the body odor," Bobbi says.
"I also remember an orange haze from the glowing lights of the stage. It was everywhere, lighting up the sky."

The pair had met only three months earlier, over Memorial Day weekend, at the bar where Nick worked. "This waiter brought this beautiful blond in one day and said, 'This is my girlfriend; keep an eye on her,'" Nick explains. "Every night she stood in front of me and we got friendlier and friendlier. Then one weekend he made the mistake of leaving her home while he went to the shore with the guys and he never told her. That was the end of that. And the beginning of this."

Despite all the time gone by, Nick says they still get recognized. "We were in Germany, and right when we walked into the hotel they knew who we were."

As to why their photo was chosen, Nick has a theory. "It's peaceful, which is what the event was about," he says. "And it's an honest representation of a generation. When we look at that photo I don't see Bobbi and me. I see our generation."
-- submitted by Bill Hengels