re: JOHNNY MAESTRO:
I did a tribute to Johnny on my show on KPOO 89.5 fm and KPOO.com. I am on the air every Sunday night at 10 pm Pacific daylight time and I try to pay tribute when the artists we love leave this ole house! It was great to see a lot of coverage in the media about Johnny Maestro.
Last night I also got into a "Gonna Get Along Without Ya Now" frame of mind.
I played the new version by She and Him, the original by Teresa Brewer, and got a request to hear Skeeter Davis' version. Uh huh, Uh huh, that song will get into your head and you might's well surrender to it and sing along!
Charlie Miller, aka The Autumn King on KPOO in San Francisco.

Kent,
I really appreciate your website and all you do to keep the music alive. I've been with you for a few years now and it just keeps getting better. Sad to hear about Johnny Maestro. Rock on!
Pat Fogel
Floral City, FL

Kent
Sad to hear about Alex Chilton and Johnny Maestro. Not very many artist sang lead with two great groups, but both Alex with the Box Tops and Big Star and Johnny with the Crests and the Brooklyn Bridge did!
Mike De Martino
President of the Lovejoy Music Club 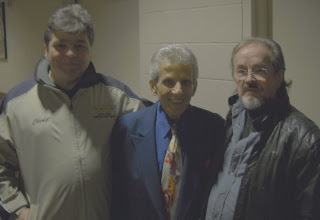 re: THE FLOCK:
Kent
Great stuff on the Flock, I liked their records on Destination more then the progressive sides on Columbia.
Mike De Martino
President of the Lovejoy Music Club

THE FLOCK DID ROCK!!!

Hey Kent ... I had the good fortune to see "The Flock" play live at The Belmont Plateau in Philadelphia in 69 / 70 (not sure of the exact year). It was a free outdoor concert I attended. The Flock had just released their first album ... which I went out and bought the very next day. I remember their Guitarist (Fred) and their Drummer (Ron, I think) were amazing, and the horn section kicked butt! I loved this band. They blew our faces off!

lol ... I LOVE that phrase ... "they blew our faces off!" Thanks, Mitch ... I forwarded your comments to Freddy Glickstein! (kk)

re: BILL HALEY AND THE COMETS:
Hi Kent,

I'm a friend of George Manney's, [I played on the Mummer's tribute that Tony Luke did at George's studio], and I saw your blog.
I wanted to see if you could get in touch with the surviving member of the group for me.
I bought a guitar years ago from Dal Knifen, [Edwards], who performed with the group. I believe that he tragically drowned a while back.
Anyhow, I would appreciate any info that I can learn about Dal.
Thanks,
Barry Wahrahftig

Best I can do is pass your request along to our readers and see what kind of response we get. We had quite a bit of coverage regarding original Comet Marshall Lytle a while back after he had part of his leg amputated. Lytle had just published his brand new book "Still Rockin' Around The Clock: My Life In Rock n Roll's First Super Group, Bill Haley and the Comets", available through Amazon.com at the link below:

Joel Whitburn's book lists the original Comets as Danny Cedrone, Joey D'Ambrosio, Billy Williamson, Johnny Grande, Billy Gussack and Lytle ... although any number of musicians have performed with the band over the years (and Whitburn goes on to name several late '50's replacements), Dal Knifen's name isn't even mentioned on the list. Maybe somebody else out there can add some details to the story ... near as I can tell, his name doesn't even Google!!! (kk)

re: TOMMY JAMES:
Hey Kent,
I have Tommy James' new book on my list, but this comment reminded me of Fredric Dannen's 1990 book "Hit Men," about the inner workings of the record labels' promotion men. Morris Levy's picture is on the first page, and there are plenty of stories regarding his "influence" in the biz. But make sure you get a later edition, which has an extra chapter.
Guy Arnston in Algonquin
I enjoyed Tommy's book ... some of the reviews I read felt there was "too much mob and not enough music" but I didn't feel that way at all ... I think Tommy told a very interesting story in a very interesting and entertaining way ... I really enjoyed it. Let's face it, this wasn't any big revelation as far as Morris Levy goes ... he was notorious in the music industry for both his connections and his unscrupulous ways ... the number of artists taken advantage of by him (and countless others in the early days of rock and roll) goes on and on and on. (Let's face it, Morris wasn't the ONLY guy out there capitalizing on his artists ... not by a long shot ... from the sounds of things, the whole music business has been corrupt since the beginning of time. Add in the payola scandal and some of the other things that were going on behind the scenes and you cannot help but wonder how big EVERY hit record really was!!! lol)
I'll have to look for "Hit Men" ... it seems to me that this was reissued not that long ago. As a big, lifetime fan of Tommy James' music, I'm hoping his record sales go through the roof now that he's finally earning royalties for all this great music he gave us. They're already talking a major movie deal on the book, too, so we've got THAT to look forward to. (Hey, we saw The Runaways movie last weekend ... it's GOTTA be better than that!!! lol) kk

And be sure to check The True Oldies Channel Website, too, to see if you can still catch Scott Shannon's interview with Tommy, posted as a Podcast a week or two ago, here: Click here: True Oldies Channel
(You'll find the podcast here): http://www.trueoldieschannel.com/sectional.asp?id=34407

re: DONOVAN:
>>>Man, it would have been great to see Donovan do all his songs
(David Lewis)
Donovan's music takes some funny turns (probably not his choice) ... having the vinyl, I went to purchase COSMIC WHEELS a decade or so ago on CD ... They left off the one song that no one (at the time) could help me with ... THE INTER-GALACTIC LAXATIVE ... a silly ditty ... lyrics include the word "shitting"... not for general audiences?) ... and then another song I remember from the radio ... RULES AND REGULATIONS ... it barely googles. I checked his discography and finally bought that 'live' CD ... but there I found another gem I'd forgotten about ... PEBBLE AND THE MAN ... GOOD STUFF ...
Who keeps hiding the music from us? If not for my memory, I'd never know they existed at all...
(gary) RENFIELD
www.RIPRenfield.com
Listening back to "Pebble And The Man", I never realized how much Cat Stevens sounded like Donovan!!! He most certainly HAD to be an early influence on Cat's music!
In this day and age when CD releases pride themselves on "bonus tracks" and the ability to provide nearly 90 minutes of music on one disk, there is nothing more aggravating than buying one of these reissues and finding out that they've CUT songs from the line-up!!! (A VERY common practice on some of the budget CD releases.) There's really no excuse for it ... if the record companies want us to buy and re-buy (and RE-buy) this same material over and over again each time they change formats, it would seem to me that the LEAST they could do was leave this material intact. As you said, it IS intact in our memories!!! (Unless Donovan himself requested this song to be removed from the release, I don't believe the record company has the right to do so!)
You don't hear much Donovan music on the radio anymore, other than "Sunshine Superman" and "Mellow Yellow" ... but this guy (often referred to as "The British Dylan" back in the early days, despite the fact that he was actually SCOTTISH!!!) had ten OTHER Billboard Top 40 Hits. Among my favorites: "Catch The Wind" (#23, 1965); "Wear Your Love Like Heaven" (23, 1967, and featured recently in Forgotten Hits during our "commercials" frenzy); "Jennifer Juniper" (#26, 1968); "Hurdy Gurdy Man" (#5, 1968, and a song that was SUPPOSED to feature Jimi Hendrix on guitar) and "Atlantis" (#7, 1969). (Let's not forget Donovan's killer version of "Season Of The Witch", a song most-often referred to these days as part of those Stephen Stills / Al Kooper / Mike Bloomfield "Super Sessions" ... but Donovan WROTE the song and did an INCREDIBLE version himself on his "Sunshine Superman" album back in 1966. (kk)

re: THE BEACH BOYS:

Did you catch The Beach Boys (with John Stamos) on "Dancing With The Stars" last night? What did YOU think? Is it just me or was Mike Love brought out on stage simply to make Buzz Aldrin look younger???

The Boys performed a medley of three of their biggest hits: "California Girls", "Kokomo" and "Fun, Fun, Fun" ... but for me the only song playing in MY head when they were finished was that Kenny Rogers classic: "You got to know when to hold 'em, know when to fold 'em" ... painful!!! (kk)

re: ALL IN THE FAMILY:
Kent ...
I'm listening to Wild Wayne's ," Memory Machine." He just played a song called "Frannie, Frannie" by Nino & The Ebbtides, from 1956. If I remember correctly, that's your wife's name. First time I heard this song. It's not half bad. Did you ever hear this song before ?
Frank B.
Nope ... not familiar with that one ... and neither is my wife (and she's the REAL doo-wop fan here!!!) So I tracked it down and we're featuring it today. (Now if Wild Wayne can find a song called "Kent, Kent", we've got a real Twin Spin on our hands!!!) kk