Tony's Tygers were just a bunch of teenagers when they first came to the attention of Milwaukee Record Producer Jon Hall of Teen Town Records. They cut their first single "Little By Little" / "Days And Nights" in 1968 and, thanks to a push from future Broadcasters Hall Of Fame Jock Bob Barry (who also wrote the liner notes for their first LP ... and the brand new SECOND album released 40 years later!), the guys soon found themselves all over the local radio dial.

That original band line-up included Tony Dancy on vocals and guitar, Craig Fairchild on keyboards, Dennis Duchrow on drums (he and Dancy wrote their first hit), Fred Euler on bass and Dave Kuck on guitar.

As sales for "Little By Little" began to pick up, the BAND was picked up, too ... by Herb Alpert's A&M Record Label out in Los Angeles. Now with a national release on their hands, Tony's Tygers began to tour a little bit, finding their names on the same bill as several other hot artists of the day such as The Monkees, Tommy James and the Shondells, Roy Orbison, Gary Puckett and the Union Gap, Del Shannon and many others.
In his book "Do You Hear That Beat - Wisconsin Pop / Rock in the 50's and 60's", historian Gary Myers described Tony's Tygers this way:
Tony's Tygers
Tony Dancy - gtr (2/28/51; Milwaukee)
Dave Kuck - gtr
Craig Fairchild - kb
Joe Turano - kb
Fred Euler - bs
Dennis Duchrow - dr
Lanny Hale - dr
Donna - voc
Gloria - voc
RELEASES:
Normandy LP 30867 - Battle of the Bands (3 LP set live at Ridge Arena, Braintree, MA 8/67) featuring Silence Is Golden / I've Got You Under My Skin along with others by various artists
Teen Town 102 - Little By Little / Days And Nights (also as Tonys Tygres) 2/68
A&M 921 - Little By Little / Days And Nights 4/68
Teen Town 105 - Can't Believe / I Still Love Her 6/68
Teen Town 107 - Debbie On My Mind / I'll Know ?/68
WRIT EP - Debbie On My Mind / (2 by Robbs, 1 by Skunks) ?/69
Jamie 1378 - Sing It Altogether / Resurrection (Tygers) ?/69
Teen Town LP 102 - Little By Little ?/68
Passion Target 1014 - Midnight In The Park / She's A Very Special Girl 12/70
Teen Town 121 - Headaches And Heartaches / Castaway ?/71
Although the Tygers and the Tigers both performed in Milwaukee about the same time, never the twain did meet. "I don't think they knew we existed," said Tony Dancy referring to Danny Peil & the Tigers. "I do every once in a while get asked about that and I'm usually not sure what they're talking about." Dancy's group was the younger one, just beginning their teen gigs about the time that Peil's band was changing their name (from the Apollos), and not really hitting their stride until after the older one had dissolved.
In the summer of 1967 the Tygers won an area battle of the bands and traveled to Boston where they came in second. "Little By Little," the band's first record, did well enough to earn a national release on A&M but, despite an album and three more singles, not much happened. "The other ones I kind of don't even consider," Dancy said. Finally, in an attempt to inject new life into the band, Dancy added two girl singers and changed the name to Passion. The resulting two singles are barely remembered even by Dancy.
With a move to Los Angeles in 1971, Dancy landed a gig as a staff writer composing music for Flintstones cartoons, the Brady Bunch and other television shows. He formed another band, Quiffy, along with Milwaukee keyboardist Doug West and tried for a record deal but none materialized. Dancy later returned to Milwaukee and continued to play clubs. From the vantage point of 1994, the Tyger who made the biggest tracks was keyboard player Joe Turano, who worked with superstar Michael Bolton. In the 00’s, Dancy formed a new version of Tony’s Tigers n Milwaukee.
Unrelated Tigers: Colpix, Roulette (Tony Sales & the Tigers)
Gary E. Myers / MusicGem
(When it comes to the Wisconsin Music Scene, Gary Myers wrote the book ... literally!!! In fact, he's written TWO of them! You can pick up both "DO YOU HEAR THAT BEAT - Wisconsin Pop/Rock in the 50's & 60's" and "ON THAT WISCONSIN BEAT - More Pop/Rock/Soul/Country in the 50's & 60's" from his website here):
http://home.earthlink.net/~gem777/
Gary's been a regular contributor to Forgotten Hits for years and, in fact, has even put together a special book offer for all of our interested Forgotten Hits Readers:
I'm selling "C stock" copies of "Do You Hear That Beat" for just $10 (these are copies with slightly wrinkled or slightly discolored covers), and I recently reduced the price of "On That Wisconsin Beat" from $31.95 to $26.95. Shipping for 2 books is $4.50 and I take PayPal. Please write if you have any questions.
Gary E. Myers
gem777@earthlink.net
Thanks, Gary, for letting us run your original piece on Tony's Tygers.

Fellow Milwaukee FH Reader Ken Freck, who owns the Musical Memories Record Shop in Milwaukee, also mentioned a competing band called simply "The Tigers" that were on the scene at the time ... but it sounds like it was Tony's Tygers that were causing all the excitement back in '68. Ken sent me a couple of Milwaukee Top 40 Charts, showing their break-through hit "Little By Little" all the way at #2, just behind The Monkees' #1 Hit "Valleri". 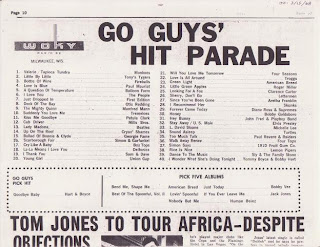 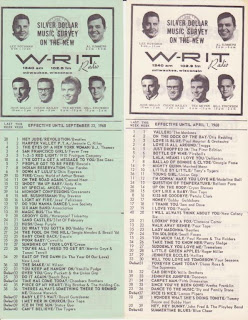 
Here are a few more Tygers photos from back in the day: 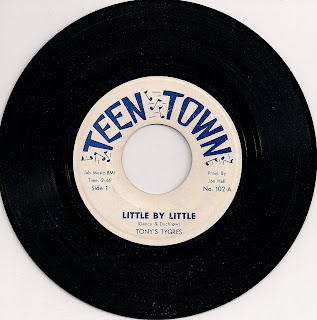 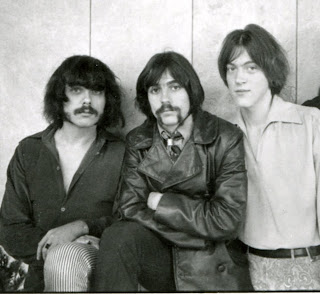 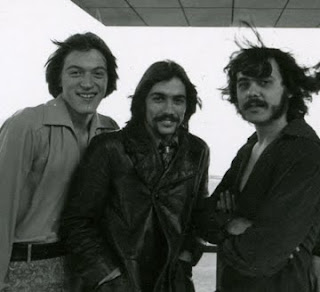 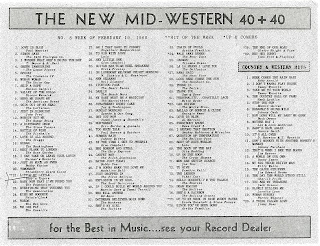