re: KAREN CARPENTER:
>>>"Goodbye to Love" has always been my favorite Carpenters cut ... heard once it was Karen's favorite, too. True? (stolf)
>>>It's probably MY favorite cut by them, too ... although with SO much great music, it's tough to pick a winner. Early on, Randy L. Schmidt's "Little Girl Blue" biography tells of the time Hollywood Producer Jerry Weintraub approached screenwriter Barry Morrow with the proposition of writing a television screenplay about Karen Carpenter's life. According to Schmidt, "Morrow knew of the Carpenters' music and recalled news reports of Karen's untimely death the previous year, but he didn't particularly like their music. 'It was considered elevator music,' he recalls. 'I was listening to acid rock, Dylan, and Crosby, Stills and Nash.'" Weintraub suggested, "'All right, listen ...here's what you have to do ... I am going to give you three or four albums and a great bottle of wine. I want you to go to a room, turn off the lights, drink this wine and listen to these albums.'" Morrow admitted that, at this point in his life, he had never enjoyed a good bottle of wine, let alone a GREAT one ... so he "followed Weintraub's orders. 'I had never heard her before; I had never stopped to listen. I had never heard the sadness and the sorrow and the pain in there voice. I never heard the undertones to it, the layers. When I heard the guitar solo in the middle of 'Goodbye To Love', I thought, wait a second, I never even knew the Carpenters!'" After he finished the bottle of wine, Morrow phoned Weintraub and said, 'I'm in if you still want me.'" (If that story alone is not enough to make you want to read this book, I don't know what else I can tell you! lol)
By the way, over the weekend we watched a number of Carpenters videos and interviews ... and even found one featuring Tony Peluso talking about his incredible guitar solo on "Goodbye To Love". Gentleman that he was, he gives full credit to Richard Carpenter for coming up with the idea to just "wail away" ... but also notes that, while this is now a common practice on power ballads (and has been for YEARS), this was the FIRST time such a solo had been attempted ... and, in fact, he says The Carpenters took a lot of flack for "selling out" by including a fuzz-guitar on one of their records. All I know is that it certainly worked for me. A year later, Paul McCartney would take a similar approach with the guitar solo on "My Love" ... and , as we've said, we've heard it COUNTLESS times since. Perhaps this will be Tony's legacy. (Hey, we're all talking about!!!) By the way, according to the new bio, the song that Karen told everyone she most personally related to was "I Need To Be In Love" ... something that was sadly lacking for most of her adult life. (kk)

Actually, while "Goodbye To Love" is a good guess, Karen Carpenter's favorite song was something else. And the reason -- as she told me in 1978 -- was the emotion expressed in the below lyrics, particularly the capitalized line.
You have to remember that Karen, while singing romantic songs as if she was, as Herb Alpert put it, "sitting on your lap and softly confessing into your ear," ironically led a rather lonely love life. The Carpenters' schedule was such that between practicing, touring, recording sessions and publicity efforts, Karen had almost no time at all for anything other than the very, very occasional one-time date. (She even went out once with Steve Martin.) On the road, her brother could bring girlfriends, but Karen? She spent almost all of her nights alone, unable to be with anyone long enough kindle any real from-the-heart relationship -- and that's what she craved.
Despite all her professional success, Karen wanted a husband and a family -- and looked with quiet envy at her non-star friends who had achieved what had so far eluded her (and, as it turned out, always would). Her brother and parents were forever suspicious of any guys who came around, fearing that they were either only after her money or might convince Karen to break away from her brother and work with other producers. When Karen eventually did work with another producer (Richard Perry) while her brother was in rehab, her brother convinced their label's execs to reject the resulting album -- which crushed Karen. That album, after Richard remixed it, was finally released (with almost no publicity), but only long after Karen's passing.
Karen, of course, finally did marry in 1980 -- to a wealthy man who had met her at a party and had reportedly never heard of The Carpenters. Sadly, the marriage failed almost right away -- only adding to the sadness as Karen's life rapidly wound down.
I must confess that upon meeting Karen, despite her smiles, I could see in her eyes how she felt inside. Our eyes seemed locked on each other all the time we were together and I think we both felt an instant connection. I have always wished that I had asked her out.
I consider Karen Carpenter to be the finest female singer of the 20th century. Apart from that, she was a kind, loving, longing, heartfelt woman who died at 32 without ever achieving the kind of not career but personal success she had always longed for. She didn't just want to SING about love. She wanted to be deeply and forever in it.
So what was Karen's favorite song -- and the emotional message and the lyric which hit home the deepest with her? The words she wanted so much to say to the right guy made up the lyrics of "Only Yesterday."

After long enough of being alone

In my own time nobody knew

The pain I was goin' through

And waitin' was all my heart could do

HOPE WAS ALL I HAD UNTIL YOU CAME

Maybe you can't see how much you mean to me

You were the dawn breaking the night

The promise of morning light


Filling the world surrounding me

When I hold you

(*) Baby, Baby -- Feels like maybe things will be all right

Free as a song singin' forever

(**) Only yesterday when I was sad and I was lonely

Tomorrow may be even brighter than today

Since I threw my sadness away

I have found my home here in your arms

Nowhere else on earth I'd really rather be

The best is about to be

So much is left for us to see

When I hold you

Lots of press here lately surrounding Karen Carpenter ... the new book, "Little Girl Blue" tells a story that most of us suspected but one which was often "retouched" by the members of her family over the years. (In addition to Steve Martin, Karen dated Alan Osmond for a brief time ... and MGM record producer / executive ... [and then future Lieutenant Governor of California] ... Mike Curb, too!) The sadness of her life truly becomes illustrated when listening to her songs ... watching her perform these so effortlessly is nothing short of amazing. It seems that singing came as naturally to Karen as breathing ... and those who worked with her in the studio over the years all seem to agree that while recording, she often had a very soft and laid back approach to singing ... but she knew EXACTLY how to work the microphone ... embracing it in such a way that this big, booming voice came out. In fact, the most common comment we've heard is that Karen's voice was one of the most unique and distinctive in the business ... whereas sometimes you'll hear a new song come on the radio and think, "Is that ... 'so-and-so'", with each new Carpenters release you KNEW by the third note that that was Karen Carpenter singing ... NOBODY else sounded like her ... before or since. There was NO mistaking or denying whose new record you were listening to ... a pretty high compliment indeed in a business that's thrived for decades by jumping on the latest trend or fad and trying to create something that sounds just like it!!! (kk)

Other things I learned in the new Karen Carpenter book ...

Karen decided to finally do her much-talked-about solo album while Richard was in rehab for his addiction to Quaaludes. (Out of loyalty to her brother, she'd previously rejected suggestions that she break away from The Carpenters' sound and do an album on her own ... not to mention quite a bit of guilt laid on her by her mother!!!) An earlier offer to sing on Gene Simmon's first solo album away from Kiss wasn't taken seriously (so Simmon's ended up using Helen Reddy and Donna Summer instead!!!) Naturally, as would be expected, Richard could not lend his support to a solo effort by his sister ... finally after weeks of pleading that she wouldn't record it without his blessing, Richard caved ... with one condition: "Do me one favor", he said ... "Do NOT do DISCO!!!" (Although she ultimately recorded the solo album, it sat on the shelf until several years after her passing ... the powers that be at A&M ... and in her family ... decided it simply wasn't "up to par" at the time it was completed.)

One event that I had completely forgotten about until I read about it again in the new book was the time The Carpenters fired opening act Neil Sedaka in the middle of their Las Vegas run together. Seems Sedaka was putting on TOO good of a show ... in effect, making The Carpenters' performance look weak by comparison. While I'd completely forgotten about this, I remember now it making headlines across the country ... Sedaka was in the midst of his '70's comeback during the "Laughter In The Rain' / "Bad Blood" period ... and let's face it, he was a seasoned performer, with over a decade of success behind him. Perhaps MOST ironic is the fact that when this event took place, The Carpenters were climbing the charts with their version of Neil's song "Solitaire"!!!

Another surprise ... While working on her solo album with famed Producer Phil Ramone (who had already won Grammy Awards for his work with Paul Simon and Billy Joel), Karen was encouraged to break out of her comfort zone and see what other avenues she could cross musically. Ramone introduced her to songwriter Rod Temperton, who presented her with rough, raw ideas for two new songs he was working on. Karen rejected both of them as not being her style. A few months later, when Ramone introduced Temperton to Producer Quincy Jones at a backyard barbecue, Rod pitched the same two songs to Quincy ... and in no time at all, Michael Jackson recorded and released "Off The Wall" and "Rock With You" ... to ENORMOUS, career-changing success!!!

A VERY interesting read, the book, "Little Girl Blue" by Randy L. Schmidt, is available at fine bookstores everywhere ... or through online services such as Amazon.com. (kk) 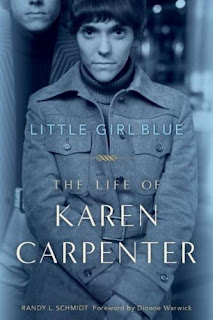