I mentioned to you last week that we were fortunate enough to see America at The Drive's Birthday Party Concert a couple of weeks ago ...and, as such, we were also treated to a "sneak peek" of three tracks from their brand new "Back Pages" CD.


Well, last week they sent me a copy of the new CD ... and I've got to tell you that I've been listening to it virtually non-stop ever since.  (The OFFICIAL release date is Tuesday, July 26th, and it will be available through all of the usual sources thanks to Entertainment One Music.  Amazon.com is currently accepting pre-orders.) 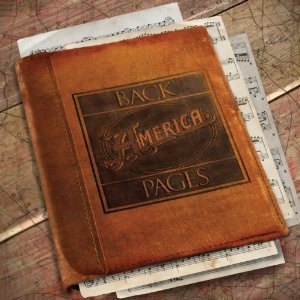 Gerry Beckley describes the album as "songs we wished we'd written" and both he and partner Dewey Bunnell say they whittled the song list down from over a hundred favorites that they each would have liked to do to the twelve that ultimately made the LP.
DEWEY:  The list was so much longer, but it was a matter of simply wading in and grabbing a dozen or so.
GERRY:  Our list was much longer, of course ... these are just the ones that seemed to work for all involved.
And it's a wide array of material, to be sure ... the guys dipped back to the mid-'60's for the title track (Bob Dylan's "My Back Pages", a hit, of course, for The Byrds back in 1967.)  Other significant songwriters from this era are also well represented on the LP as the band covers songs written by the likes of James Taylor ("Something In The Way She Moves"), Joni Mitchell ("Woodstock"), Brian Wilson ("Caroline, No"), Neil Young ("On The Way Home"), Jimmy Webb ("Crying In My Sleep") and Paul Simon (imagine America covering "America" ... a new theme song, perhaps???)  They also do a version of The Zombies' hit "Time Of The Season".
But it's not just "golden oldies" that America is tackling this time around ... they ALSO have cut new versions of "Till I Hear It From You" by The Gin Blossoms, "Someday We'll Know" by The New Radicals, "Sailing To Philadelphia" by Mark Knopfler along with my personal favorite, "A Road Song" by Fountains Of Wayne ... which just also happens to be the lead-off single from the new LP.

"A Road Song" is a GREAT track that has all of the characteristics of an America Hit ... in fact, they TRULY make it their own with a little musical twist at the end.  If radio will simply play it ... and they SHOULD ... the boys may be in for another "comeback" ala "You Can Do Magic" back in 1982!  (Seriously, this song deserves to be heard ... so we've featured a little snippet of it here today as well!)  Who'da thunk-it?  America doing a Fountains Of Wayne song!!!
GERRY:  We love all of the Fountains of Wayne songs ... this is a new song from them but we probably could have done an entire album of their stuff.
DEWEY:  I love the song-writing craftsmanship of Fountains Of Wayne Songs ... between lyric and melody, this is a well-balanced song with quirky twists and turns.  Plus I like the opening line because I love Wisconsin!
And The Gin Blossoms' tune ("Till I Hear It From You") has always been one of my favorites ... it just has a real "classic feel" to it.  Co-written by FH Fan Favorite Marshall Crenshaw, The Gin Blossoms scored a #11 Hit with the original version back in 1996 ... and it still gets Classic Rock airplay today.  (The song was also featured in the film "Empire Records".)  We were fortunate enough to hear the boys perform this one in concert the other night ... along with "Woodstock" and "A Road Song".
I wondered if it seemed a bit odd to feature contemporary songs by artists like Fountains Of Wayne, The Gin Blossoms and The New Radicals alongside well-known rock classics by the likes of Bob Dylan, Paul Simon, Brian Wilson, Joni Mitchell and Neil Young.  The Fountains Of Wayne song is brand new and was given to America to record for this special project.  (In fact, FOW's Adam Schlesinger co-produced America's 2007 album "Here And Now"!)  Schlesinger at the helm of an entire America project just might propel the boys right back on to the charts!
But what about The Gin Blossoms and New Radicals tracks?  How did THOSE track make the "favorites" list?
GERRY:  Those two songs were favorites of mine from the more current collection of material ... just good strong songs, I think.
DEWEY:  I was honestly unfamiliar with both these songs before Gerry brought them to the table for the project.  They are both excellent songs and came out nice.  I think they represent another musical era of songwriting to contrast the vintage songs that we chose from our youth.
When I heard that America was recording a version of "Caroline, No", I couldn't wait to hear the end result. It's always been a personal favorite and, knowing what a huge fan and admirer of Brian Wilson Gerry Beckley is, I was already starting to imagine what the recording of this tune might sound like in my head.  So imagine my COMPLETE surprise to put on the CD and hear Dewey Bunnell singing this track!!!  And, I might add, offering up what I believe just may be the finest vocal of his entire career!!!  (Without question, it's my SECOND favorite track on the album!)
I'm told that upon hearing America's new recording of his song, Brian Wilson said "An absolutely stunning version ... I almost got tears."
DEWEY:  A Brian Wilson song was a must ... and I have always had a particular soft spot for "Caroline, No".  I think it lyrically speaks to the feeling of loss in a far broader sense than simply losing a girl.

The new LP is available July 26th on Entertainment One Music.  It is produced by Fred Mollin (who also worked with the boys on their 1980 "Alibi" album.)  Mollin was nominated for a Grammy last year for his work on the Johnny Mathis album ... and, over the years, he has worked with legendary artists like Jimmy Webb and Kris Kristofferson.

It was Fred who first suggested this "remake" project a couple of years ago.
DEWEY:  Fred encouraged us to put together some lists of songs.  He has a good historic perspective and had a general direction for the album that we all agreed was worth trying.  After 40 years of singing mostly self-penned songs, I liked the idea of singing some of those that got me interested in the first place.
GERRY:  We'd always thought about the idea and finally the stars aligned.  Fred came to us with the concept so he was involved right from the start.  We always enjoyed working with Fred and he's building quite a legacy with his latest work.  I think you just need to see the list of writers that we chose to get a pretty good picture of who has inspired us over the years.  When you collect songs of this caliber, it's just humbling to sing them.  It's a true reminder of how rich our generation has been in talent.
In addition to the new LP, America has been quite busy lately, out on the road promoting their 40th Anniversary Tour ... and it was just announced last month that the band will receive a Star on The Hollywood Walk Of Fame in 2012!
For more on all of America's latest and upcoming activities, visit their official website:  www.venturahighway.com .
(Gerry Beckley's "Internet Tip Of The Day":
Do NOT 'Google' "AMERICA" ... you won't find us that way!!!)
Thanks for the tip, Gerry!!!  (kk)

THIS JUST IN:  America will be returning to The Arcada Theatre on December 3rd where they'll perform a Christmas Show (along with all of your favorite hits!)  For a complete list of all scheduled appearances, simply click the website link above.
Posted by Kent Kotal at 6:54 AM