Along with EXCLUSIVE FORGOTTEN HITS photos and video!!!


After over 35 years in the radio business I can count on one hand the recording artists I would like to see, but never had the chance, and I would still have a couple of fingers left.  Guess Who front man, Burton Cummings, was one of those rock stars.

Then came last weekend (Jan. 21st), when Burton ended a small two week tour of the Northeast with a very memorable set (almost two hours) in Westchester County, New York, at the Tarrytown Music Hall.
Burton gave up smoking a few years back, which certainly didn’t hurt protecting his voice, which I’m thrilled to report, is now as versatile, expressive, and powerful as it’s always been.

The 64-year-old singer - songwriter is an incredible conversationalist.  He would make a great deejay or talk show host.  His love and knowledge of music is very evident.  He can recite songs, artists, album cuts, B-sides and trivia going back to the beginning of rock and roll.

The sad part had been that for a musician who enjoyed 15 Billboard Top 40 hits, he seldom performed in the United States in recent years.  Most of his concerts had been in his native Canada, even though he’s had a house in Los Angeles for decades.  Burton’s routine has been to split his time between California and Canada each year.  And the reason why he hadn’t been more active in the States is because of the “karaoke Guess Who,” as Burton calls them, who seemed to be always touring the U.S.  That touring contingent doesn’t include Burton or his Guess Who partner and co-songwriter Randy Bachman.  He and Randy gave the rights up to the name years ago.  And Burton was uncertain how many American music fans would be passionate about buying tickets to see show without being able to use the GUESS WHO name in the promotion of the show.

That’s all changed recently as Burton has discovered U.S. fans do remember him by his own name and still have a warm spot in their hearts for Guess Who music.  And those fans have been coming out in large numbers to see him energize the songs they grew up to on the radio.  He takes great pride in performing the songs just like the fans remember them blasting out of their radio speakers.

Yes, Burton spends most of his show singing his hits behind the keyboard, but you soon discover this guy isn’t only a keyboard specialist, because from time-to-time he’ll grab a guitar for a song or a flute.

It’s impossible to walk out of a Burton Cummings performance disappointed.  He does ALL the Guess Who hits you come to see, from the very first one, “These Eyes,” to the very last one, “Clap for the Wolfman.”

Plus, he reveals to the crowd, “About a year ago we put this song back into the set,” and then he dives into his first solo hit, “Stand Tall,” from 1976.

Burton, who became a U.S. citizen in the past year, is just finishing the final mix of a live concert CD that will soon be available to fans and has plans to continue touring the U.S.

When Burton came out for his final encore in Tarrytown I was quietly asking myself, I wonder what song he’ll close with, since he already performed all the hits.  “Because this is the final night of our short tour, we’re going to do a tune we don’t usually do.”  He then counted down his gifted band and they got everyone up on their feet for a building shakin’ version of ‘Louie, Louie!”
-- Tom Cuddy

One of my all-time favorite recording artists has got to be Burton Cummings ... I've probably seen him close to a dozen times over the years ... both with The Guess Who and as a solo artist ... as well part of the Cummings - Bachman Band Reunion from a few years ago.

ALWAYS one of my favorite vocalists, Cummings is in a group by himself ... nobody has ever come close to duplicating his sound.  (Even Randy Bachman used to joke, after forming Bachman-Turner Overdrive, that he knew he had to go in a different direction because he realized that he could never compete with "the voice".)

One of the strangest billings I ever saw was right after Burton's first solo hit, "Stand Tall", was released.  Cummings opened the show for Alice Cooper ... about as mis-matched a set as you could imagine.  (You wouldn't think that Alice's crowd ... the folks who packed the stadium to see the headliner behead dolls live on stage ... would hold any affection for Burton Cummings' music ... but the music of The Guess Who is TIMELESS and crosses ALL musical boundaries.  Cummings said in an early interview that he thought the group had to have "one of everything" in order to compete with The Beatles ... so The Guess Who did ballads (like "These Eyes"), hard rockers (like "No Time" and "American Woman") and even jazz (like "Undun").  Between 1969 and 1975, they placed 13 songs on Billboard's Top 40 List, and nearly every one of them has proven to remain a classic.  (How it is even remotely possible that these guys are NOT in The Rock And Roll Hall Of Fame?  This is nothing short of a ludicrous injustice ... for two years, The Guess Who outsold ALL of the other Canadian Recording Arts COMBINED!!!  There has never been a bigger rock act to come out of The Great White North ... and there is absolutely NO excuse for this ridiculous omission!)


Teaming Burton Cummings with Alice Cooper boggled the mind back then ... one of The Guess Who's best known album tracks was "Glamour Boy", a swipe at artists like Cooper and David Bowie, about whom Cummings sang, "for $37,000 you can look like your sister tonight".  The very next show I saw him in ... just a few months later ... was opening for Melissa Manchester!)  Another highlight was when Burton toured as part of Ringo Starr's All-Star Band ... limited to just a couple of songs, he routinely stole the show night after night with his rousing performances of "American Woman", "No Time" and "These Eyes".

Too bad this  was a limited tour ... I would love to see Burton Cummings in concert again.  Checking for tour dates, I found nothing listed Stateside as of this moment in time.  (Man, would Burton sound GREAT at The Chicago Theater or what?!?!?  He could sell that place out for a week!)

Thanks for the great concert review, Tom ... and all the other little goodies you sent us, too!  (Read On!)  kk 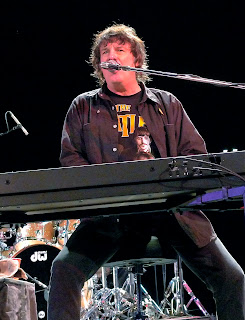 
(Don'tcha just LOVE the fact that Burton's wearing a Beatles T-Shirt ... and how cool is it that he got to tour alongside one of his all-time idols, Ringo Starr!!!  Burton is also a HUGE Bobby Darin fan ... and ... at one time anyway ... his doorbell played "Mack The Knife" if you were fortunate enough to be invited over to his house!!!)  kk