Helping Out Our Readers

>>>I recently picked up an LP with a great cover which might be fun to use in the print book, with an art rendition of 6 DJs at WMEX — but no names or date. It’s part of the Cruisin’ Collection, but I’ve never seen this cover before. Besides no date the only name that might help to date it is Don Daniels as station PD, but I can’t find his name in a search.  Can you or your subscribers help me ID them? My primary interest is in Wolfman Jack, who is easily identified; but I’d like to obviously give credit to the others — it’s a terrific image. Please see the attached. I’m thinking Arnie Ginsburg, and maybe Larry Glick?  (LinDee)
>>>If anybody's got any ideas on this, drop us a line and we'll forward them along.  (Who knows ... maybe some of the jocks on our list were even part of this whole thing!) kk 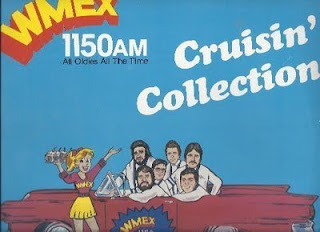 >>>Big reader of Forgotten Hits.  I'm 52 and this song has escaped me finding out if it is available and what the name is.  It is from the documentary called Straight Shooter about the Mamas and Papas.

Here is the song that starts:  I am a rake and a rambling boy, many a city I have been. The Cumberland City is ??????  Well, the Cumberland City, yes, I married me a wife, loved her better than I did my life ... She threaten kind by night and day ...
Can you please send this out to the viewers for help ??  I've tried Shazam and Sound Hound to no luck.  This is a tough one that I feel can be a tremendous challenge for the listeners and having the video clip to show - if we can show this of course ???  Thanks for any help you can give. (Bob)
Could the tune Bob Morrow inquired about as featured in the Mamas & Papas documentary be "Cumberland Mountain Deer Chase," as featured on the first Journeymen album?  I have the doc and the album, but have not unearthed them for this missive.  I will be happy to do so if someone more astute doesn't have a definitive answer.
Scott Paton
I sent Scott a copy of the clip ... and here's what he had to say ...
Kent,
That clip won't open for me, even after I uploaded the latest QuickTime.  I did, however, find "Cumberland Mountain Deer Chase" and it's clearly not the song that Bob Morrow was talking about.  I'll find my Mamas & Papas DVD and see if the song hints at anything I recognize.  I have all the Journeymen LPs / CDs, but there may have been a stray single side or two that never made it to an album.  I guess the tune could even been a cover done in performance-only, too.
Scott
P.S.-- Here's a list of every song that appeared on album. anthology or 45, as far as I know.  Maybe one of these titles hints at the tune:
Posted by Kent Kotal at 6:41 AM