Micky Dolenz has a brand new CD coming out next week (titled "Remember"), an upcoming reunion tour with fellow Monkees Peter Tork and (incredibly) Michael Nesmith, and a return engagement in "Hairspray", too. All of this hot on the heels of headlining the 2012 Happy Together Again Tour. (Guess you could say he's a pretty busy guy!)

Dolenz recorded a couple of Monkees remakes for the new CD, along with some of his other personal favorites. The whole CD has a very "laid back" feel to it ... you can almost see Micky performing some of these tunes in a smoky blues / jazz club. (In fact the lead-off single is a remake of The Monkees' 1967 British #2 Hit "Randy Scouse Git" ... and the song takes on a whole new clarity when listened to in this context): 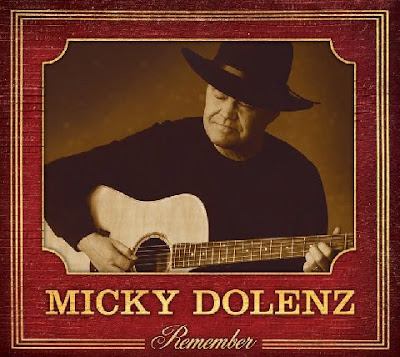 MICKY DOLENZ, LEAD SINGER AND DRUMMER OF THE MONKEES ANNOUNCES UPCOMING SOLO ALBUM, REMEMBER, POISED FOR WORLDWIDE RELEASE ON SEPTEMBER 25, 2012
Micky Dolenz, singer and drummer of The Monkees is gearing up to release his new album, Remember, which features many songs that mark great milestones in his life, as well as some new songs. This album is scheduled to release worldwide on September 25, 2012 (Waterfront Ent. Group / RoboRecords and Universal Music Distribution).
Produced and largely arranged by David Harris, Remember promises classic tunes that will evoke some cherished memories from listeners of all ages. Dolenz opens up a time capsule of pop hits from decades ago, updating them with a tone that is reminiscent of his younger days as a Monkee and appreciative of the music that continues to inspire him.
The lyrics of the warm ballad, “Remember,” encapsulate this nostalgia — “Remember is a place from long ago / Filled with everything you know / Life is just a memory / Close your eyes and you can see / Think of all that life can be.”
"Remember had just been finished when we heard the tragic news of Davy Jones' passing" added Rob Christie, President of Robo Records / Waterfront Ent. "which made the theme all the more poignant for Micky."
The track list of Remember portrays an “audio scrapbook of the important songs in my life that had meant something to me for one reason or another,” according to Dolenz. He incorporates new versions of classic songs, re-imagined. The original writers of these songs range from some of his pals to The Beatles, Carole King, Harry Nilsson, and Neil Diamond.
One of Dolenz’ most exciting memories lies behind his cover of The Beatles’ “Good Morning Good Morning.” He reminisces, “One day, Paul [McCartney] invited me down to Abbey Road studios for a new album they were doing [Sgt. Pepper’s Lonely Hearts Club Band]. I must have expected some kind crazy, love-festival, Beatlemania event so I got dressed accordingly. I must have looked like a cross between Ronald McDonald and Charles Manson!” He was surprised when he got to the studio, since it had plain white walls and the only people there were the Fab Four in jeans and t-shirts, just playing their music. John Lennon called out, “Hey Monkee Man!” and offered to play Dolenz a song they had been working on … “Good Morning Good Morning.” This song was “burned into my neural pathways forever,” he says. And now he performs his own version of it as the lead track on Remember.
Remember also features a cover of the Chuck Berry classic, “Johnny B. Goode,” in homage to the start of his Monkees career. “The song was my audition piece for The Monkees, and that’s the song that got me the gig which changed my life forever.” After The Monkees began skyrocketing, Dolenz developed his musical personality even further.
“Several of these tracks are songs that I had been offered [in the past] by incredible song writers and I had turned them down for some stupid reason or another. They went on to become big hits for other artists,” according to Dolenz. For example, “‘Sugar Sugar’ was supposed to be the next Monkees song.” It was the song that caused a historic revolt between The Monkees and their producers. Of course, it went on to become a huge number one hit for the Archies … a cartoon band! Dolenz explains, “I never wanted to do the song, but producer David Harris did an incredible arrangement for this new album and talked me into it. It’s now become one of my favorites on the album!”
Dolenz felt he couldn’t have released this album without including his most famous vocal track of The Monkees, “I’m a Believer,” written by Neil Diamond. “The song became such an important track in my career.” In the re-imagined version on Remember, Dolenz wanted to do something completely different with it. “I’ve always wanted to do a country version of this song, and this was my opportunity. And yes, kids … I recorded this long before Shrek,” Dolenz jokes.
For Micky Dolenz, the friendship that evolved along with the music-making magic was another inspiration for the theme of this album. “We hit upon the title ‘Remember’ because of my dear friend Harry Nilsson, who I was very close to. I was actually there when he wrote the song [“Remember”] … and it stayed with me for the rest of my life.”
Micky Dolenz’ Remember is an enjoyable and fun audio scrapbook of Dolenz' most cherished memories. It is sure to be a special treat for all audiences ~ Get ready to take a trip down memory lane!
1. Good Morning Good Morning
2. An Old Fashioned Love Song
3. Diary
4. Many Years
5. Sometime in the Morning
6. Quiet Desperation
7. Randy Scouse Git
8. Johnny B. Goode
9. Sugar Sugar
10. Do Not Ask For Love
11. I’m a Believer
12. Remember
Remember will be available worldwide September 25, 2012 on Waterfront Entertainment Group / Robo Records and Universal Music Distribution.

We were very fortunate to have the opportunity to listen to an advance pressing of this new CD. My early favorites include Micky's take on "Sugar Sugar" (a song long-rumored to have first  been given to The Monkees to record, only to have them turn it down because they were trying to move away from their "bubblegum" / teeny-bopper image) and the reimagined version of "Randy Scouse Git", which just happens to be the first single taken from the LP. (The arrangement to "Sugar Sugar" is a real highlight of the album but we couldn't get clearance to share it with you today.  Hop on over to Amazon.com and you can listen to a 30-second sampler.)

You'll be able to pick up your own copy of this new CD next week ... or pre-order it today through all of the usual suspects.


JUST FOR FUN:
Here's a great clip of The Monkees performing this classic in its original version: