WLS-FM: The Big Shake-Up ... After The Dust Has Settled

Consider this our Open Letter to Jan Jeffries at WLS-FM:


re: NOT QUITE WHAT I HAD IN MIND:
More shake-ups at WLS-FM ... our buddy Scott Shannon is gone ... never saw THAT one coming!!! And Brant Miller is back in the morning spot instead of Fred Winston, who'll now be doing afternoons, following Greg Brown, who is now handling mid-days. I don't quite get the logic of that move ... Winston is a seasoned morning drive personality and was tops in his field for ages. WLS already tried the Brant Miller Experiment a couple of years ago and it failed miserably ... that's what prompted the move to bring Dave Fogel in in the first place. With Scott Shannon gone, the rest of the evening is rounded out by old stand-bys John "Records" Landecker and Dick Biondi. (Tom O'Toole and Danny Lake will still do weekends and fill-in spots.) This is a vintage Chicago Oldies line-up ... making me think that Dave Fogel's parting comment was not so far off the mark after all. When asked why he thought things didn't work out for him at the station, Fogel quipped "I'm too YOUNG to work at WLS." (Hmm ... there may be something to that remark!)

Miller, Winston, Landecker and Biondi have long-standing ties to WLS back in their hey day so it's kinda neat that they're still associated with the station. But instead of capitalizing on that rich, Big 89 heritage, it sounds like WLS is already calling itself "Chicago's Classic Hits Station", making me wonder what other kind of format changes may be coming. Stay tuned! (kk)

Honestly, the greatest success stories of these jocks is deeply rooted in the '60's and '70's ... wouldn't it be cool if WLS became the oldies station in town most focusing on this music ... and even some '50's thrown in, too, since that's the music that inspired these jocks to get into the business in the first place. Everybody else in town is already playing the '70's, '80's and '90's ... devote and dedicate yourselves to the era of WLS' hey-day, let these guys exhibit their winning personalities and you just may see things turn around for the station. As we said before, if the jocks are only going to be allowed to do 30, 60 and 90 drop-ins between blocks of songs ... and the bulk of that time is being spent giving out the station's call letters ... then ANYBODY can play the music. Give us a REASON to tune in ... you certainly have the talent onboard to do so. (Too bad Tommy Edwards is already locked in over at K-Hits ... he would have made a great mid-day personality, too, tying in with WLS' Golden Past!) kk

When are they going change the call letters to WJMK?
Dave Kovarik
LOL ... For the benefit of all of our out-of-town readers, Fred Winston, Greg Brown and Dick Biondi were ALL part of Magic-104 when they let everybody go to switch over to the ill-fated Jack-FM. John "Records" Landecker also spent a fair amount of time there. (In fact, we used to wake up to his morning show every weekday ... it was fun because from 5:30 to 6:00, he'd play nothing but stuff OFF the play list, making it the most entertaining half hour on radio at the time!) 104.3 is now K-Hits, another "classic hits" station, playing the music of the '60's, '70's and (especially) '80's. (kk)

The new WLS-FM line-up kicks off today.  However, despite this classic, antique WLS line-up, apparently "oldies" is no longer in the mix for the station.  In an interview with Chicago Media Columnist Robert Feder, Jeffries said “It is clearly a shift of format from oldies to classic hits.  There will not be any radio station like this one.” He then pointed to a playlist spanning ’60s to ’80s rock featuring Bryan Adams, Journey, John Mellencamp, Chicago, Doobie Brothers, Eagles, Supertramp, Styx, Blue Oyster Cult, Fleetwood Mac and Bruce Springsteen.

“We still will play a lot of the music that we’ve always played, but it’s no longer oldies. We will not use that word.” Above all, the presentation will be unique, Jeffries said. “We will be fresh to the market and will have instant relevance that is unduplicated. And that will be compounded by the fact that we have the most legendary [talent] lineup in Chicago — no question about it. Probably in the whole country.”

Hmmm ... "no other radio station like it"?!?!?  Scan your radio dial this morning .. you'll find these same artists playing on virtually every radio station in town, up and down the dial, ad nauseum.  '60's to '80's Music is what K-Hits was just based on.  (The elimination of the word "oldies" offers a much clearer picture as to why Scott Shannon is no longer with the station ... he lives and breathes the oldies ... and to great success, I might add ... his True Oldies Channel is now broadcast on over one hundred stations across the country!)

I also love the comment posted by one of Feder's readers (ooo, now THAT has a really cool ring to it!) after Rob posted this picture of the new WLS-FM line-up: 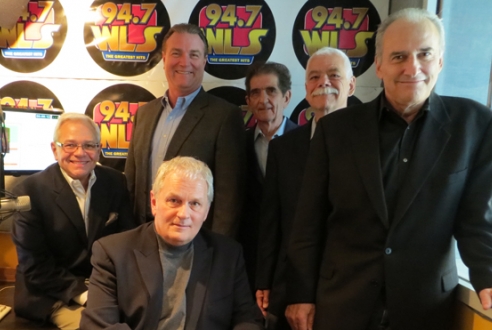 They're not going to use the word "oldies"? Someone needs to take a good look at that photograph up above there.
Profzed

And isn't THIS interesting ... after my "Friday Flash" rave-out about bringing Personality Radio back to WLS, readers responding to Robert Feder's column proved again that we are not alone in this opinion ... check out some of these comments that we found posted on Feder's site:

Wow! What a lineup! Reminds me of the days when radio stations actually had personalities on them. All these guys are pros, gentlemen, and all around good people.. Best of luck to all of them.
Mark Edwards

Yes - but are they going to be allowed to talk and have a personality? You can't say much in the few seconds they get 3 - 4 times an hour. All of these people are much too talented not to be given some freedom to talk and interact with their audience.
A Listener

It's like I'm in high school, again!! Although I love the oldies music, I hope they allow these guys to talk and entertain the audience with their great personalities. Ater all, radio IS entertainment!!­!
The Red Winger

How much do these guys actually talk each hour?
A Serious Question

Are you reading this, Jan Jeffries?  Are you getting the message? Do you sense a certain theme here? How is it possible that radio continues to ignore what its listeners really want in favor of what they THINK is best for their listeners?!?! Here is a public plea to PLEASE pay attention to your listeners for a change ... it just may turn the whole industry around if a few of the major stations did this. Otherwise, it feels a whole lot like The Rock And Roll Hall Of Fame scenario ... we have NO voice in the outcome while you tell us what we're supposed to like. That isn't of any benefit to the community ... and radio is supposed to serve the community. The industry has truly lost sight of this ... which I believe has greatly contributed to its demise these past couple of decades. Get back on track with what has proven to have worked in the past ... the results just may surprise you. (kk)

A quick recap of my original rave, posted last Friday ... this was before we knew that Scott Shannon no longer fit into the mix. (And speaking of that, how do you let go the highest rated jock on the station?!?! Shannon is one of the most recognized and honored voices in radio, winning Billboard's Broadcaster of the Year award multiple times ... he runs his own radio station, The True Oldies Channel, manning it 24/7, heard on over a hundred radio stations across the country and around the globe, thanks to the Internet. One can only hope that there is another Cumulus outlet here locally that might pick up Scott's True Oldies Channel again so that Chicagoans can listen live on the radio instead of having a computer nearby.

From Friday:
>>>I can't say that I'm broken-hearted over the announcement that Dave Fogel is no longer part of the WLS-FM team. I've made no secret of the fact that I never liked Fogel in the morning ... Chicago is a major market ... and WLS is a LEGENDARY radio station ... and while I hate to see ANY jocks out of work, we simply deserve better ... and have always had it ... but for SOME reason the Morning Drive Slot has been exceptionally weak these last several years ... and I don't understand why. There is SO much good talent out there (and much of it out of work.) While I don't wish unemployment on ANYONE (been there, done that), I hope this paves the way for Fred Winston's full time return to the station, something we've been campaigning for here in Forgotten Hits for the past several years.
But, that being said, if the station REALLY wants to go in "a different direction", then how about THIS concept ... put the personality back into radio. I've grown disgusted by having to sit through these talented on-air personalities with SO much to offer in the way of entertainment being restricted to getting 30, 60 and 90 second breaks after a block of songs, only to see them forced to use that time to repeatedly give out the call letters three times and say not much more. With decades of experience, guys like Scott Shannon, Fred Winston, Dick Biondi, Greg Brown, Tom O'Toole and Danny Lake can do SO much more for the station than give out station i.d.'s. Let them do what they were born to do ... entertain us! We already KNOW what station we're listening to ... we don't need to be reminded three times every fifteen minutes! If you want us to KEEP on listening, let these guys be themselves and entertain us!!! I've said it before ... we already KNOW the music ... it's been drummed into our heads for the past 40 years ... let these guys shine and be the reason we come HERE to hear it, rather than every other spot on the dial that's playing basically the exact same thing!!! WLS practically INVENTED "Personality Radio" ... I say bring it back because you've got the talent here to pull it off. THAT is what is going to make your station stand head and shoulders above the rest ... NOT hearing "94.7, WLS, playing The Steve Miller Band for the 64th time today on WLS, 94.7". (kk)

Tomorrow ... EXCLUSIVELY in Forgotten Hits ... we talk to Scott Shannon about life after WLS.  Don't miss it!  (kk)
Posted by Kent Kotal at 6:35 AM