The Saturday Surveys (May 3rd)

It's our biggest Saturday Surveys Feature Yet!!!

Four charts from 1967 to kick off this week's edition of The Saturday Surveys ... featuring our first May Charts.

Describing itself as playing The Hit Parade "For The Motor City", the station actually broadcast out of Windsor, Ontario, Canada.  With their 50,000 watt signal, they were a favorite amongst teens growing up on BOTH sides of the border.

Chicago's very own Buckinghams top the chart this week in '67 with "Don't You Care", a record that never made it that far nationally but DID hit #1 in several major markets, including here in Chicago (where "Kind Of A Drag" failed to do so!)

Another Forgotten Hit favorite of mine sits at #14.  It's the Jerry Jaye remake version of "My Girl Josephine" ("Hello, Josephine"), the old Fats Domino tune.

Neat to see this Canadian station giving away a day in Hollywood with Davy (Davey?!?!) Jones.  The Monkees were at their peak at this time ... but you won't find them on this chart. 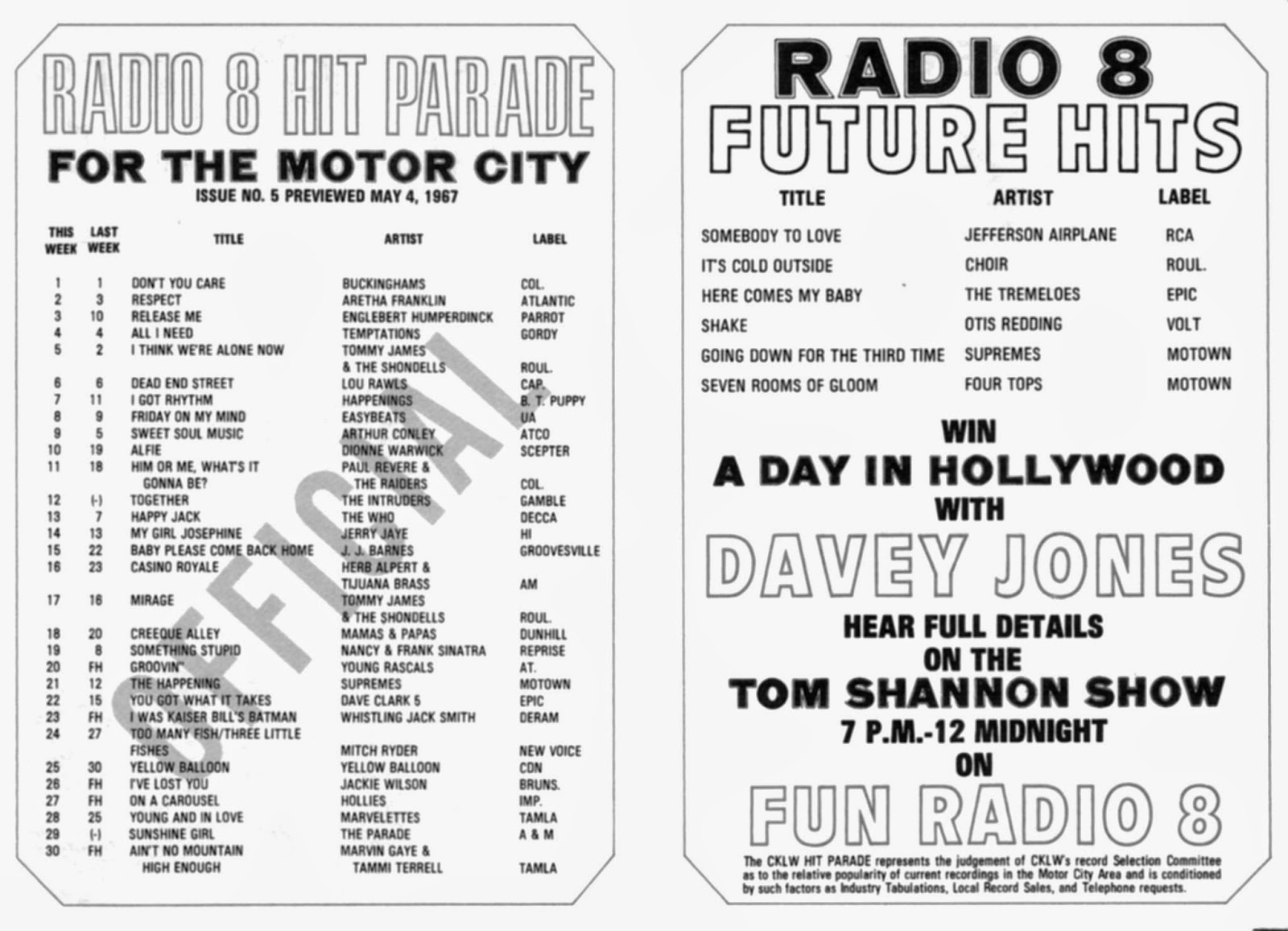 KACY out of California showed a considerably different ranking ...

Here we find our FH Buddy Davie Allan and the Arrows topping the charts with his '67 Instrumental Smash "Blues' Theme" ... and The Buckinghams are nowhere to be found!

Instead we get more of the pre-Summer of Love California sounds like "My Back Pages" by The Byrds, "Can't Seem To Make You Mine" by The Seeds, "Somebody To Love" by The Jefferson Airplane, "Sunshine Girl" by The Parade and "Creeque Alley" by the transplanted Mamas and Papas.

(You'll also find "Ding Dong, The Witch Is Dead" by our FH Buddies The Fifth Estate, listed this week as a KACY Kontender!) 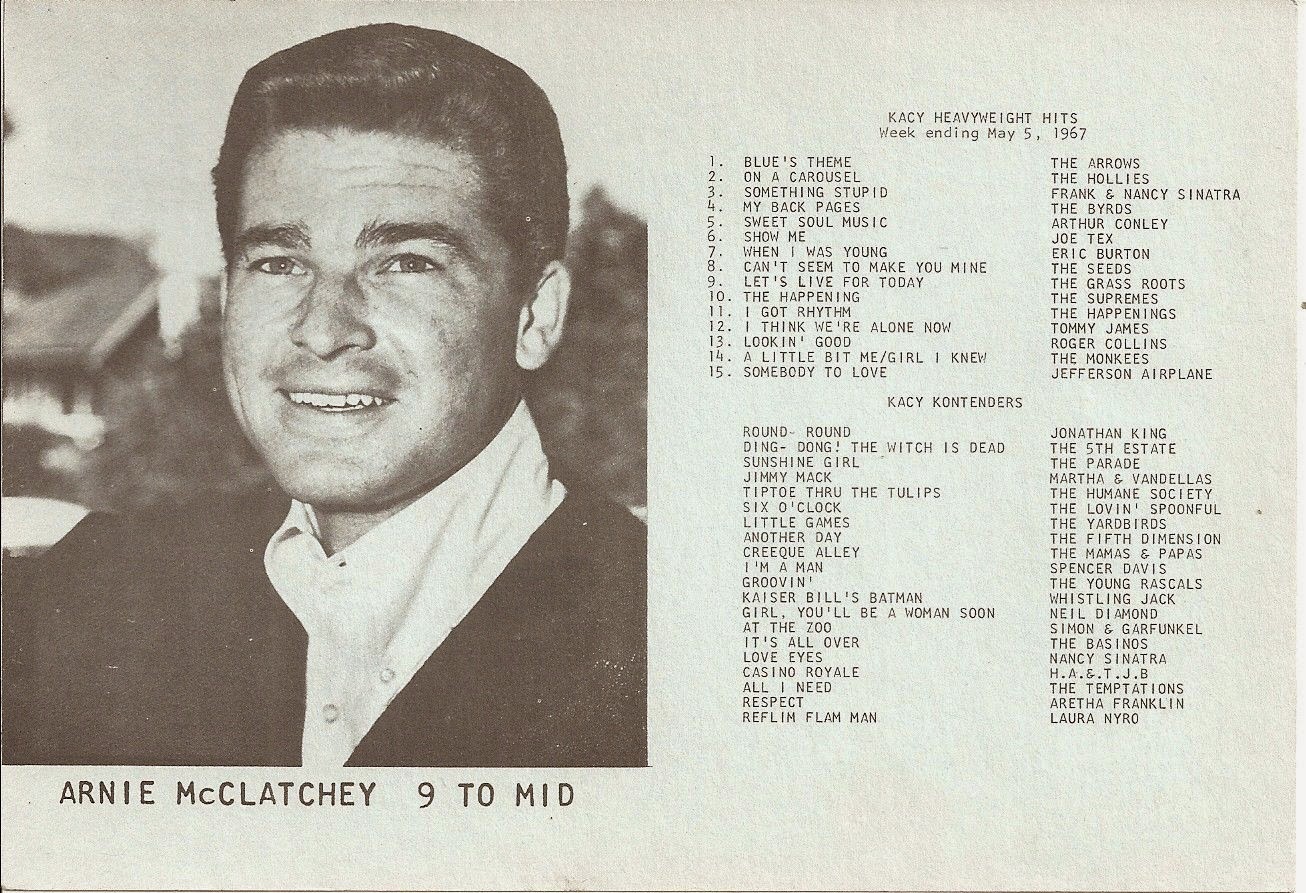 The Dave Clark Five only managed a #22 showing this week on the Detroit chart ... but were locked in at the #1 spot on The Jet Set Sound Survey coming out of WDOT (in Burlington, Vermont!) this week in '67.

The Buckinghams are still right at the top of the charts (#2) with "Don't You Care" ... and on THIS chart The Monkees have TWO Top Ten Hits ... including the single "Valarie" / "She Hangs Out" (which didn't actually exist!!!) and "A Little Bit Me, A Little Bit You".  (Back in the really fun days of competitive AM Radio, the really hip stations would pull out every trick in the book to stay one step ahead of the competition.  As such, WDOT was most likely playing "Valleri" right from The Monkees' TV Soundtrack [as were a number of stations across the country, like Chicago's own WCFL] and "She Hangs Out", which was the B-Side for a short while of their Canadian only single ... often described as more of an R&B arrangement of this great pop tune that wouldn't "officially" surface for six more months on The Monkees' "Pisces, Aquarius, Capricorn and Jones, Ltd." LP.)

Look closely and you'll find lots of great 1967 Hits on this chart including the latest sounds from hip, popular artists like The Tremeloes, The Young Rascals, The Buffalo Springfield, The Electric Prunes, The Yardbirds, The Turtles, Paul Revere and the Raiders, Tommy James and the Shondells, Herman's Hermits, Simon and Garfunkel, The Mamas and the Papas and ... Perry Como (?!?!?)  Huh?!?!? 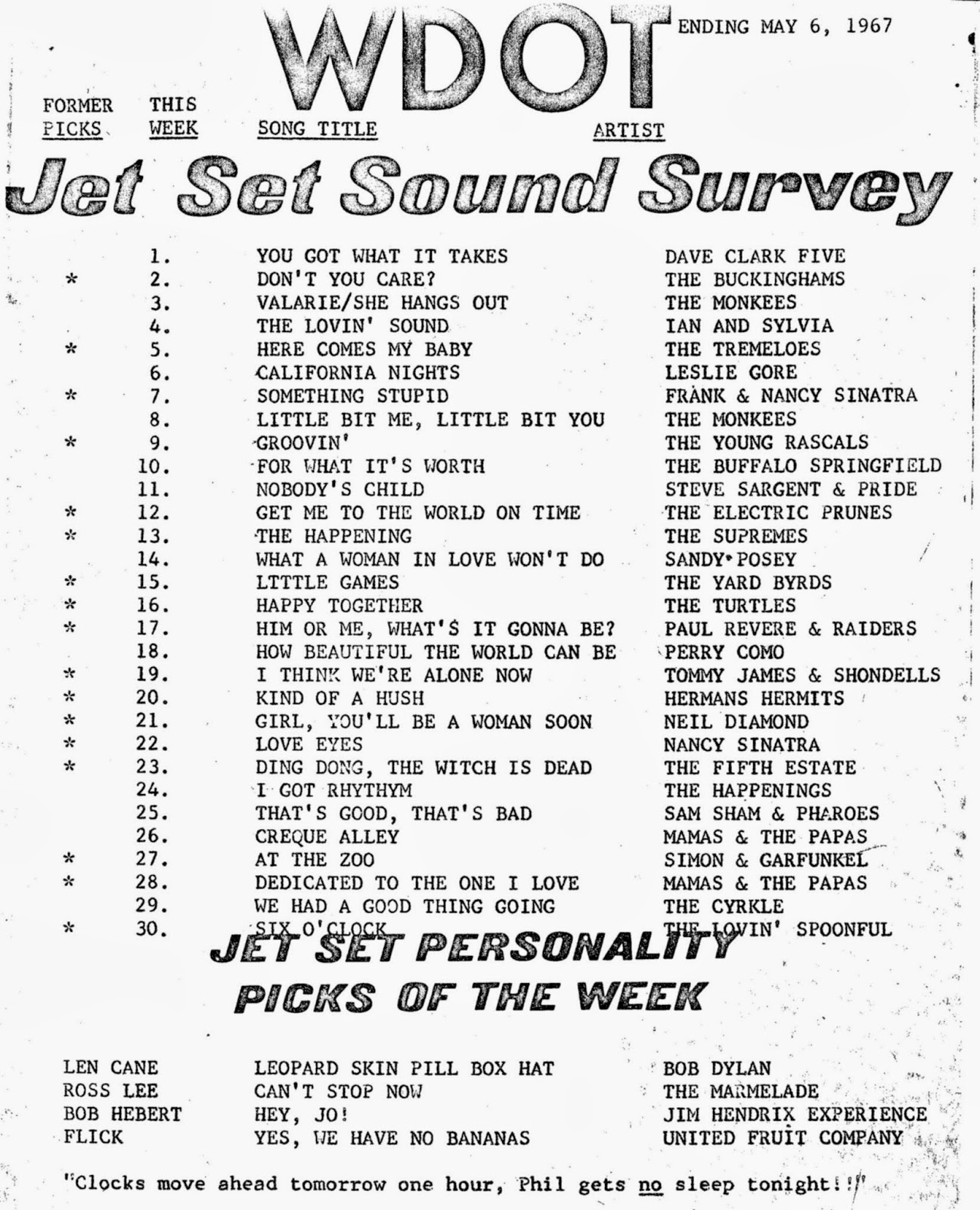 And finally, KYNO, another "Boss Radio" station (from down the road a piece ... in Fresno, California), shows The Young Rascals on top with their hit "I've Been Lonely Too Long", a bit ironic in that all of the OTHER charts featured from this week in 1967 show their current hit as "Groovin'"!!!

You'll still find many of the hot California sounds listed above on our other West Coast Chart ... only this time they're joined by the hits "Yellow Balloon" by Yellow Balloon and "Live" by The Merry-Go-Round.

A glance at these four charts ... all from the exact same week in 1967 ... will show you why the national charts RARELY reflected what you were hearing in your home town ... which is why so many of us remember things differently, growing up listening to the radio in the '60's.

We venture back to Chicago for this survey from May, 1972, where Sonny and Cher top the chart with their unlikely hit "A Cowboy's Work Is Never Done".

"Run Run Run" by Jo Jo Gunne, "Suavecito" by Malo and "Mister Can't You See" by Buffy Sainte-Marie were all much bigger hits here in Chicago than they were nationally.  ("Suavecito" would top this same WCFL chart a few weeks later ... and "Run Run Run" would ultimately peak at #2.)

Just outside The Top Ten you'll find "Simple Song Of Freedom" by Buckwheat, a #84 Billboard charter and "Vahevella", an early hit for Kenny Loggins and Jim Messina at #13 (which is how the label showed the spelling of this song on their earliest pressings.)

The 'CFL chart was always fun to look at for their "themed" Top Tens ... notice this week (for "May Day" Gold) they're featuring songs and artists built around a theme of flowers. 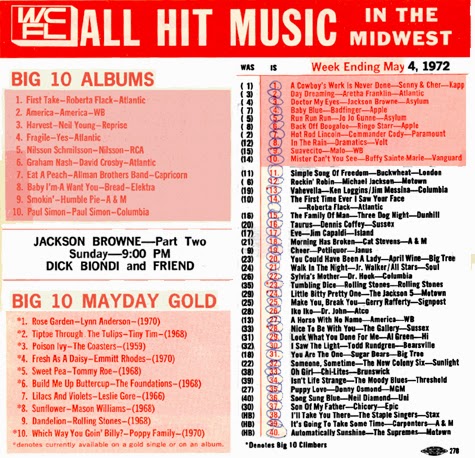 Sure, The Shadows Of Knight hit the top spot on quite a few charts in '66 ... but here in the Santa Barbara / Ventura area of California, it was Them scoring the #1 Hit ... and a full year earlier!  (Despite TWO separate releases ... first as Them's first US single in 1965 ... and the again trying to cash-in on the success of The Shadows Of Knight's remake version ... Them's version of "Gloria" never climbed any higher than #71 in Billboard Magazine ... making this #1 showing in California all that much more surprising.)

At #2 were Sam the Sham and the Pharaohs with what KACY called "The Wooly Bully" (guess they figured it was some type of new dance craze!) and right behind them were Sonny and Cher with the LONG forgotten "Just You".  (We just saw them top the Chicago chart on this date in '72!)

Herman's Hermits have back-to-back hits with "Mrs. Brown, You've Got A Lovely Daughter" and "Silhouettes" at numbers 5 and 6 respectively, just ahead of The Beatles with their latest, "Ticket To Ride".

And how about the "Hillbilly Hit" "Engine Engine #9" by Roger Miller!  (That probably wouldn't fly as "politically correct" in 2014!!!) 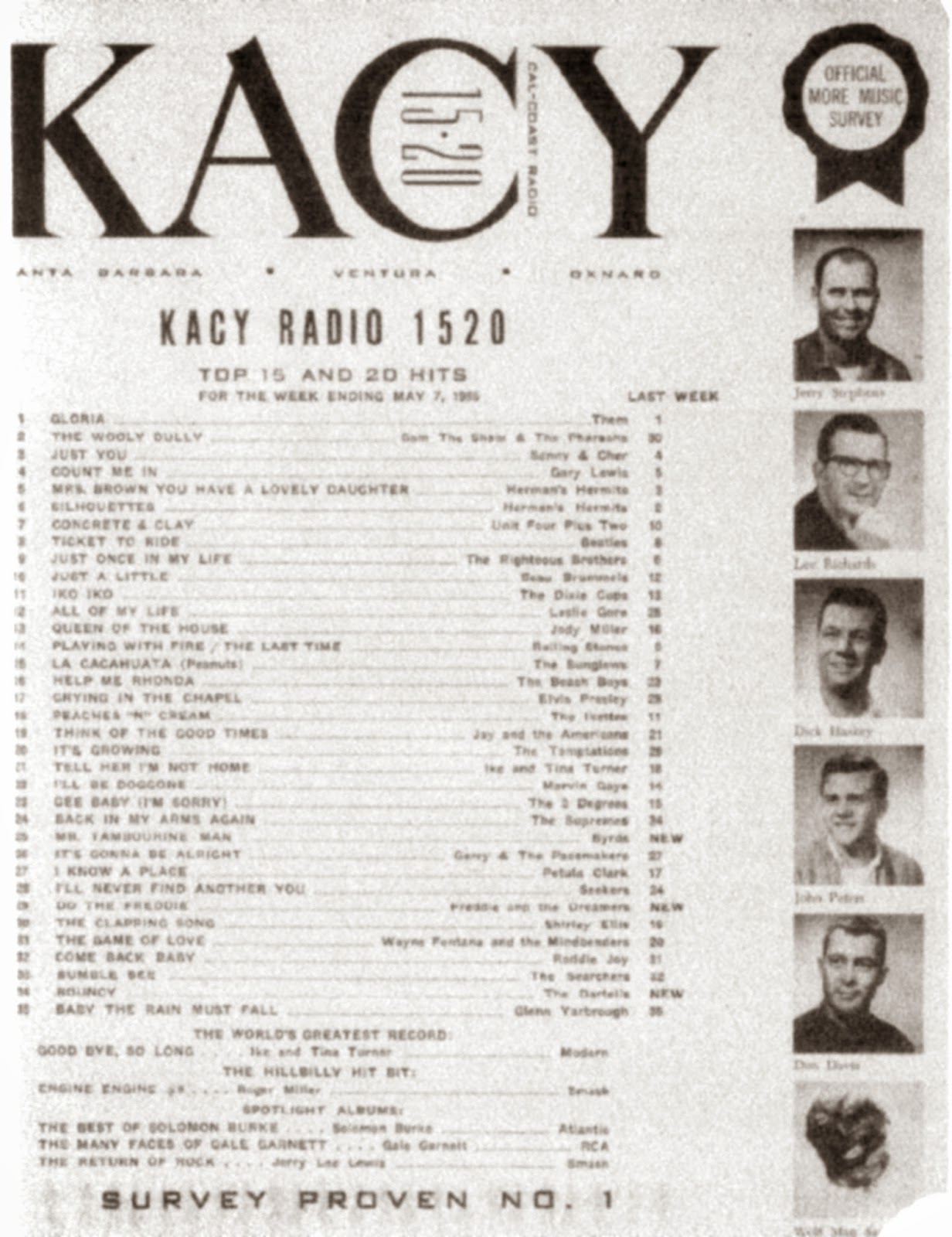 And finally, three more charts from this date featuring The Beatles at #1 ...


First, from Los Angeles (on KFW-Beatle Radio), where The Fab Four are holding down the Top Four Spots on the countdown with "Love Me Do", "Can't Buy Me Love", "Do You Wanna Know A Secret?" and "Twist And Shout".  (They've also got two of The Top Four Albums this week!) 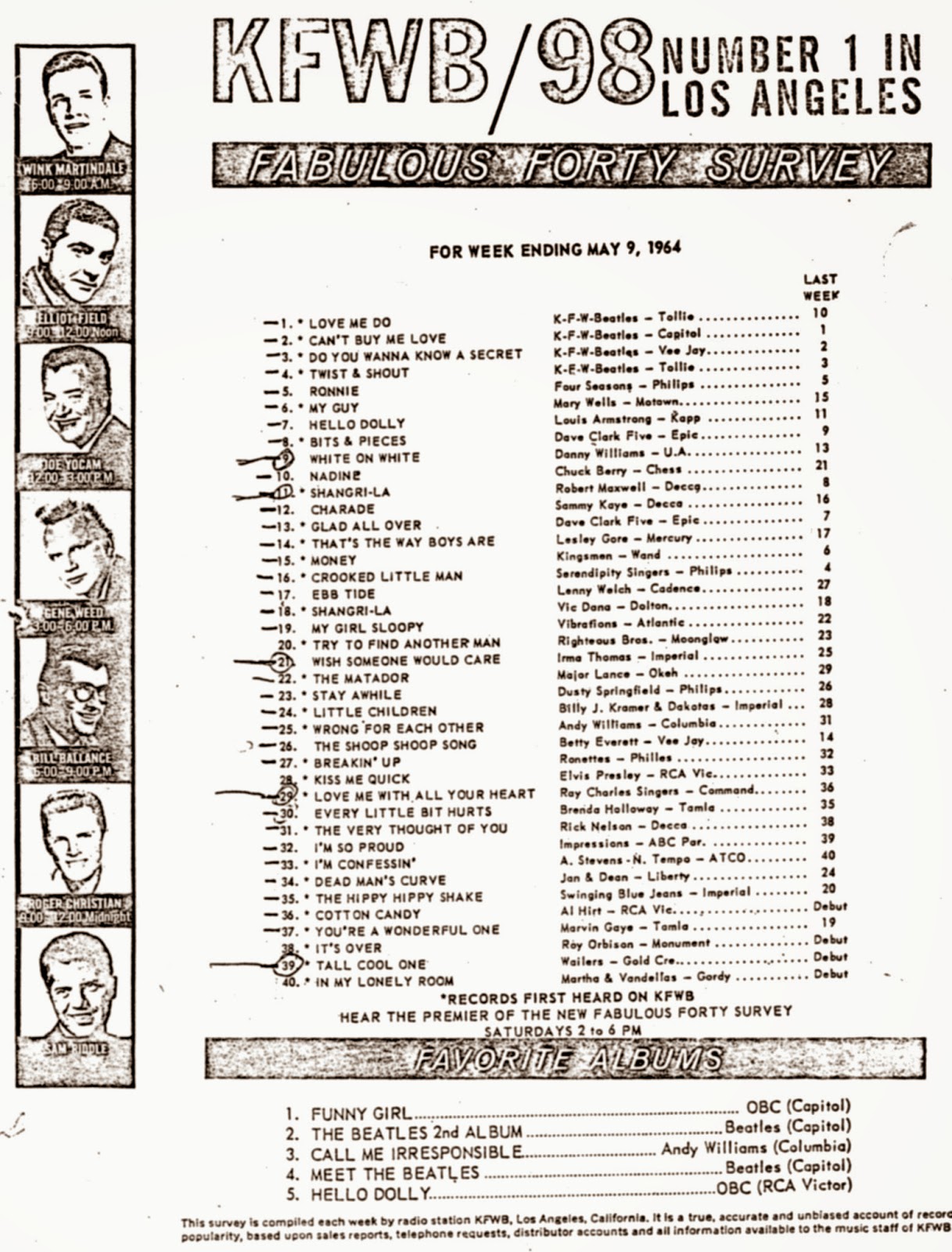 Jump ahead four years to 1968 and you'll find "Lady Madonna" sitting on top of this San Luis Obispo KSLY Chart (shown as by The Beatles ... who?)

Sitting at #2 is the remake of The Zombies' track "I Love You", done by People.  We've talked before in Forgotten Hits about how the radio hit version of this song was NOT the one you could actually buy in stores.  Instead you got a completely different take ... twice as long with TOTALLY different vocal arrangements.  The reason this song also made it to #2 here in Chicago is ... I'm sure ... was because of that totally unique radio mix that we heard at the time ... it is INFINITELY superior to the hit single version ... and I can't believe it sits unreleased on CD for all this time.  (Somebody needs to get on this stat ... Dick Bartley ... are you listening?!?!?)

It's also kind of cool to see Fever Tree in the Top Ten.
But I especially like the deejays' pick hits of the week ... and the commentary that follows.

Stanley R. Sogg picks "Lazy Sunday" by The Small Faces ... WAY before anybody knew who these guys were.

Frank Potter likes "Bring A Little Lovin'" by Los Bravos, their follow-up hit to "Black Is Black" ... while Your Man Flint has selected a B.B. King track, "Paying The Cost To Be The Boss."

Fenwick Rabbit (who?) likes "The Room" by Candy; Bobby Greene likes "My Shy Violet" by The Mills Brothers (really?) and Gregarious Greg Nelson gives the nod to "Peggy Sue" by Buddy Holley(sic) What?!?!? 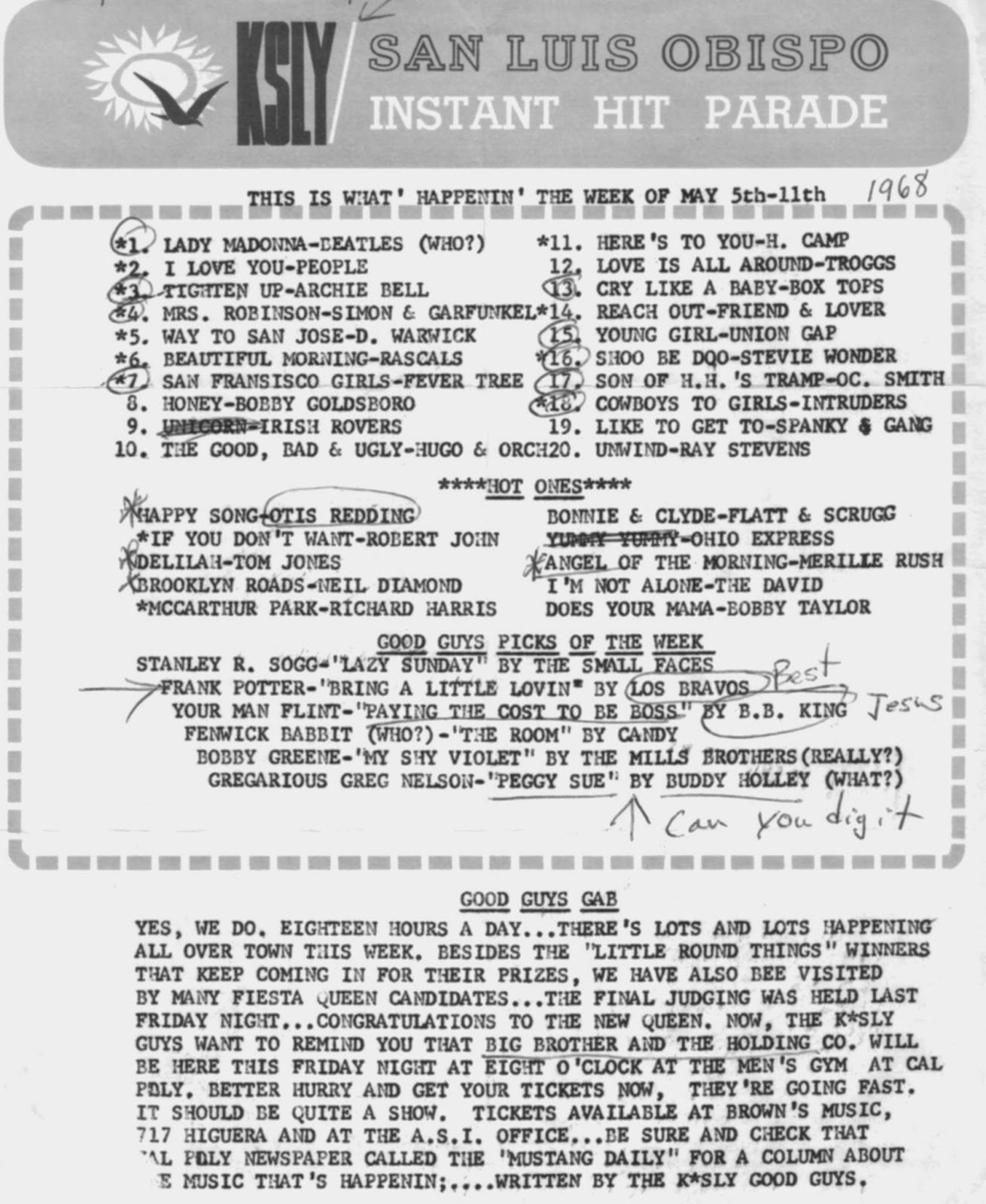 And proving yet again that it didn't really matter WHAT year it was, here are The Beatles, topping the charts again in 1969 with their two-sided hit "Get Back" / "Don't Let Me Down".

Leaping from #12 to #1, they replace fellow Apple Recording artist Mary Hopkin's hit "Goodbye" (a Paul McCartney tune) ... wonder how many people out there remember THAT one!

Other HUGE leaps up the chart this week include Henry Mancini's "Love Theme from 'Romeo And Juliet'", jumping from #30 to #2 and "Oh Happy Day" by The Edwin Hawkins Singers, who leaps from #29 to #3!

Tommy Roe's in The Top Ten with "Heather Honey".  So is Andy Williams with the mis-spelled "Happy Heart", sitting at #8.  And check out the action on the brand new Three Dog Night hit "One", climbing from #45 to #9 in just one week!

I also like this weeks "Hit Bound" song, "I Can't Quit Her" by The Arbors, applying the same treatment they used far more successfully on "The Letter" a few months earlier to this vintage Al Kooper / Blood, Sweat And Tears tune.