Check Out This Canadian Chart!

While working on our brand new chart feature "Flashback 50 Years", I came across this Canadian Chart from 1965 ...


I found it unusual in that it showed both The "Canadien" Top 40 AND the "Americain" Top 40, side-by-side.

I couldn't help but wonder ...

Was there really this much prevalence given to Canadian artists at that time?  By 1965, Rock And Roll Music (and more recently, The British Invasion) had completely taken over the world.  Was there still an audience out there seeking French recordings of what can probably be best-described as Adult Contemporary Hit Music?

Glancing at the titles, I'm assuming that all of these songs were recorded and broadcast in French ... Did the DJ's speak French Canadian, too, or were the programs themselves done in English?

And what were the sales volumes like comparatively between these two musical genres?  (Enough to warrant their own chart apparently!)

Obviously, CHUM catered to a very specific teenage Top 40 audience ... but is this in any way indicative of what the competition was doing at the time?  (The American Chart falls directly in line with what we were listening to here at the time ... so there was definitely a "connection" going on in terms of the "pop" side of things!)

I contacted our Official Forgotten Hits Canadian Bureau Chief, Doug Thompson, to see if he could feed my curiosity with a few facts ... I was intrigued to dissect the state of Canadian Radio at the time ...

And, as always, Doug came through with flying colors. 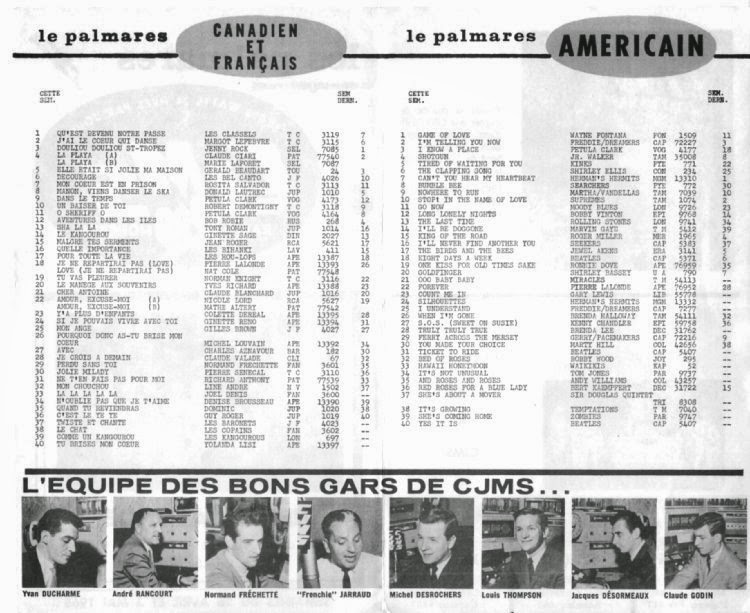 These CJMS jocks definitely spoke French exclusively.  If you were a French station in Quebec, your DJ's only spoke French.  In the late '60's / early '70's, a couple of jocks at Montreal's CHOM (the first 'underground' radio station in Canada, a year before CHUM FM switched from classical to that format), several of their DJ's spoke both English and French on air.  French language stations complained and the CRTC forced CHOM to halt the dual language practice.

The province of Quebec has always marched to its own drum, in music, language and politics.  Record sales and touring could and did support many French Canadian artists, such as Pierre Lalonde (#18) and Ginette Reno (#24) who, along with many others, had wonderful careers in Quebec.  Ginette Reno's manager at that time was Rene Angelil, who many years later, discovered and managed a young teenage Quebec singer by the name of Celine Dion.

Petula Clark (who has two hits on that CJMS chart, #9 and #11) had been having hits in France (that she sang in French) before "Downtown" and she was a success in Quebec as well, as was French performer Charles Aznavour.

English Canada's first home grown teen idol, Bobby Curtola, first hit the charts in 1960 and had eight Top Ten hits between '60 and '65.  His chart career was pretty much over by '65.  That year, he had a Top Thirty hit with his version of Roy Orbison's "Mean Woman Blues".  He never charted after that, although he was a huge hit in the lounges in Las Vegas for decades.  The Howard Hughes Organization signed Bobby to a long term contract.  Bobby only had two of his Canadian hits make it on the U.S. charts.  Both were in 1962.  "Fortune Teller"  went to #41 and "Aladdin" climbed to #92.  In the U.S. Curtola was signed to Bob Keene's Del-Fi label.

Doug Thompson in Toronto
Posted by Kent Kotal at 3:09 AM