This month we venture  back to 1979 ... when THESE 25 songs were the most popular tunes throughout the land ... 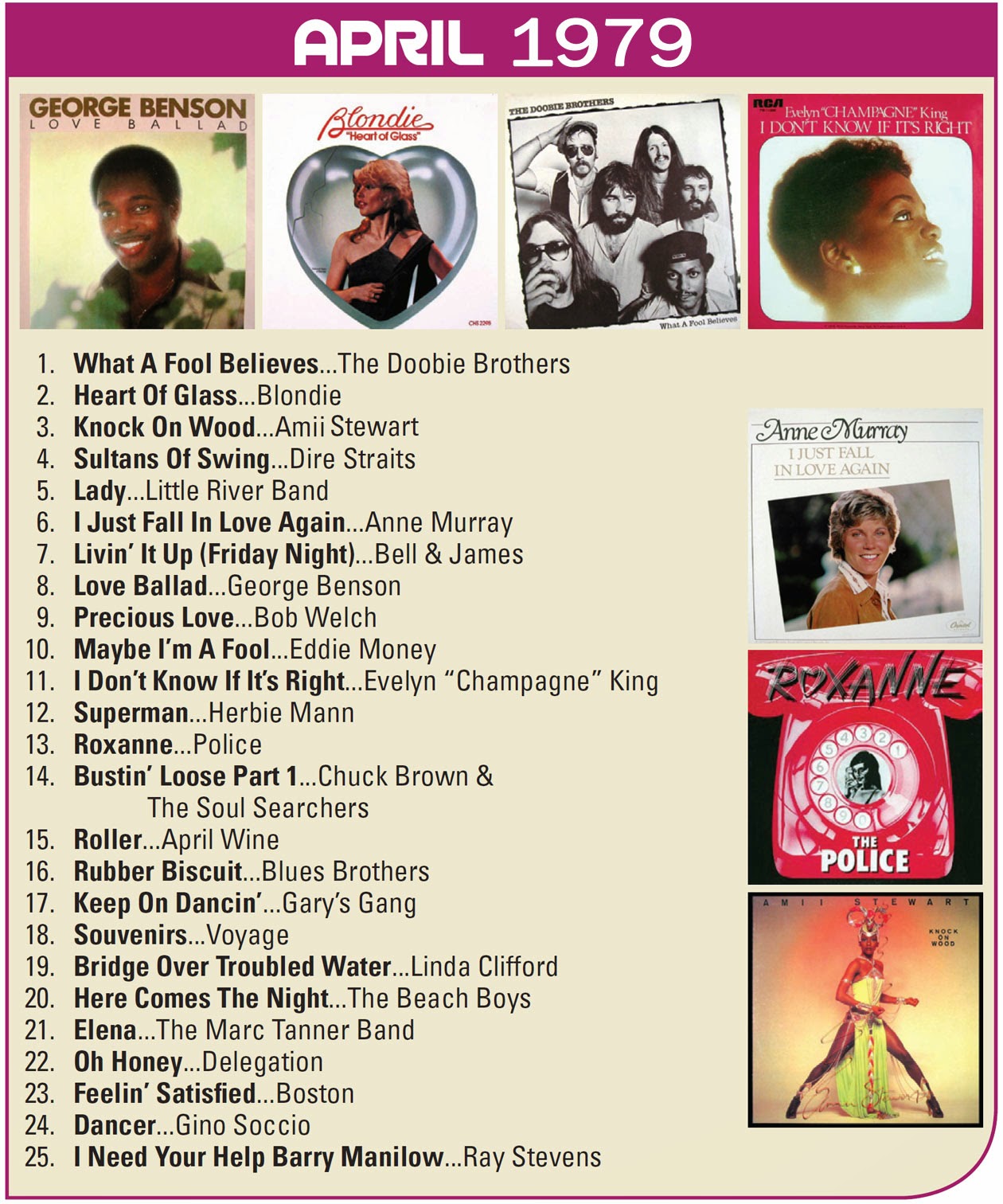 Ray Stevens did a PERFECT job of nailing the Barry Manilow sound when he cut "I Need Your Help, Barry Manilow" in 1979.  What a GREAT novelty record!  (Barry's been all over the news again lately, having recently announced his marriage to his manager over a year ago ... and his plans to stop touring.)  And Ray Stevens is back with a new release, too ... featuring his latest attack on pop culture, "Taylor Swift Is Stalking Me"!!!

There are a few songs on this month's list that I don't even recognize ... I guess 1979 wasn't a big year for me personally when it came to music ... "Dancer" by Gino Soccio?  "Oh Honey" by Delegation?  "Elena" by The Marc Tanner Band?  "Souvenirs" by Voyage?  "Keep On Dancin'" by Gary's Gang?  "Bustin' Loose" by Chuck Brown and the Soul Searchers?  "Superman" by Herbie Mann?  Even hearing them in Joel's excellent April, 1979, medley didn't do much to spark a memory for me.

Some of the others ... "Feelin' Satisfied" by Boston, "Rubber Biscuit" by The Blues Brothers, "Roller" by April Wine, "Rosanne" by The Police, "Maybe I'm A Fool" by Eddie Money (one of my favorites by him that NEVER seems to get any airplay anymore, regardless of how big it was in '79) and "Precious Love" by Bob Welch I knew because I was listening to Album-Oriented Rock at the time.  The Disco Era was just winding down and I was focusing most of my musical attention on stuff that had a little more "edge" to it.

Others, like The Beach Boys' disco remake of one of their old album track "Here Comes The Night" and Linda Clifford's version of "Bridge Over Troubled Water" (popular here in Chicago because she hailed from here ... in fact, I still see her from time to time performing with The City Lights Orchestra) were last ditch efforts to cash in on the disco craze ... listen to either one of them and you'll see why disco needed to die!!! (lol)  Evelyn "Champagne" King's "I Don't Know If It's Right" was a little better ... at least it fit the mold of what disco was SUPPOSED to be, rather than being forced to fit a particular category.

Other popular tracks of the day included some that you still hear regularly today ... "What A Fool Believes" by The Doobie Brothers ... this one was literally EVERYWHERE at the time ... there was NO escape!; "Heart Of Glass" by Blondie (which had a hint of a disco feel to it as well ... but still a great rock track, too) ... "Sultans Of Swing" by Dire Straits, which still sounds very inventive today, all these years later, "Lady" by the ORIGINAL Little River Band, and, quite honestly, "Roxanne" by The Police belongs in this category, too ... along a few others that haven't weathered the 36 year storm as well like "Knock On Wood" by Amii Stewart (big hit ... but it loses ALL the soul of the original version), "I Just Fall In Love Again", a beautiful piece of work by Anne Murray, who was enjoying hit after hit after hit at the time, "Livin' It Up (Friday Night)" by Bell and James (I actually really liked this one ... still do!) and "Love Ballad" by George Benson (resurrected recently by Chicago's Me-TV-FM, a little more often than it needs to be in my opinion!).

Those were your 25 biggest hits, 36 years ago this month, according to Billboard Magazine.

You can capture monthly recaps of ALL the Billboard Hits with Joel Whitburn's new Record Research series of books, "Top Pop Playlists".  Volume One covers the years 1955 - 1969 and Volume Two picks up in 1970 and runs through 1984.  BOTH offer The Top 25 Hits for EVERY month in between ... 30 years of charts, 360 in all ... and all printed in beautiful 4/color with photos of the original picture sleeves for many of the featured tracks.

In fact, you can even view sample pages from both books on Joel's website.

And how's this for an ever MORE super deal!!!

And, be sure to join us again NEXT month (May 15th) when we feature another monthly chart from these publications.
Posted by Kent Kotal at 6:00 AM