It was another wild night ... ALWAYS a good time when Peter Noone takes the stage ... and last Saturday (May 30th) was no exception.  In fact, this time around they performed the whole show as two sets with no opening act and a brief intermission, giving the fans even more of what they'd come to see, including a little more schtick, a few more British Invasion hits and some rarely performed Herman's Hermits B-Sides.

I had the chance to visit with Peter backstage before the show.  He had already done a fan club appearance earlier that day ... and several of the VIP fans with meet and greet privileges were invited to his sound check as well.  As we all already know by now, Peter's legion of Noonatics are second to none when it comes to loyalty to their hero, often traveling from show to show to catch his act in an almost Pied Piper fashion.  (It's a very reciprocal love fest ... making for an incredible connection ... Peter truly does love and appreciate these fans who have stuck by him from the very beginning.)

Having cut back on his number of appearances this year, Peter's mantra for 2015 is "This show will be the best one ever" ... and he did not disappoint.  He seems to have a built-in "entertainer switch" and once it's clicked on, he's in high gear from that moment forward, truly appearing to be having the time of his life up there while taking all of the rest of us along for the ride.

He was in fine voice and fine spirits as he took the Arcada stage for his first set, still sounding and looking incredibly youthful, cranking through the hits ... both his and those of several other British Invasion Artists as well ("Love Potion Number Nine" by The Searchers, "Ferry 'Cross The Mersey" ... or in this case "The Fox", a river that runs through St. Charles about a block away from the theater ... by Gerry and the Pacemakers, "I'm Telling You Now" by Peter's very close friend from the '60's, Freddie Garrity and the Dreamers, "A World Without Love" by Peter and Gordon, "For Your Love", the popular Yardbirds track (first recorded by Herman's Hermits by the way), "Do Wah Diddy Diddy" by Manfred Mann and a few others (including the obligatory Mick Jagger spoof, this time on "Jumpin' Jack Flash" and the Johnny Cash classic "Ring Of Fire", still one of the most popular songs in the set for some crazy, unknown reason!)

Incredibly, even at the ripe old age of 67 (he'll be 68 in November), Noone maintains his child-like voice, which has only gotten purer and richer with age.  He can completely transport you back to a time when he was 17 years old and on tv here in The States nearly every week performing his latest hits.  And when the music starts, it's like he's 17 all over again in an almost Peter Pan sort of way ... and the whole audience is off to Neverland and memories of a happier, carefree time.  I swear, he never ages ... and this music still has the same kick and appeal just as it did (as Peter points out) over 20 years ago when they were making records as the original Herman's Hermits.  (As always, Peter's crowd is a mixed bag of original fans ... their children who grew up listening to and loving this music ... and now even some grandchildren who have come out to enjoy the whole feel good '60's experience.  Never more than during a Herman's Hermits concert is my point driven home more clearly regarding this music being timeless ... we saw five year olds singing along with every word and dancing in the aisles!)

The show-stopper for me Saturday Night was "The End Of The World", a song he has long claimed to be his Herman's Hermits favorite ... I have NEVER heard him perform it better ... absolutely goosebump-inducing ... a simply beautiful reading of a classic.  Since about 70-80% of the show is played for laughs, one forgets just how well Peter Noone can still sing ... but when it's time to play it straight for a few minutes the quality of his voice really shines through.  He has clearly taken very good care of himself over the years ... and, having seen him perform at least 20 times in the past 12 years I can confidently say that this was the very best I've ever heard him sound ... so kudos to you, Peter, and your remarkable band for keeping things fun, fun, fun some 50 ... I mean over 20 years later!

With the expanded set we were treated to a few Herman's Hermits B-Sides as well. Besides "The End Of The World" the band also performed "Sea Cruise", "I Gotta Dream On" (one of my all-time favorites), "Traveling Light", "Hold On!" and "No Milk Today", a hit in its own right once DJs started playing the other side of "There's A Kind Of Hush", which just happened to be his show-closer.  (At the fan club convention earlier that day he asked those in attendance what other songs they'd like to hear, which is what prompted "I Gotta Dream On" being added to the set.  Should you be open to any other suggestions, another personal favorite B-Side of mine would have to be "What Is Wrong, What Is Right" ... it's got a whole different sound to many of the other ones typically performed each night.)

Most of the hits were there ... the only ones I noticed missing were "Leaning On The Lamp Post" (which he usually does ... I got the feeling that they were straying from the set list a little bit every now and then trying to keep things moving, so, during a different set of circumstances, some of these may be featured from time to time as well), "East West", "Don't Go Out Into The Rain", "Museum" and "I Can Take Or Leave Your Loving" ... otherwise we heard them all ... from the biggest ("Silhouettes", "I'm Henry The VIII, I Am", "Mrs. Brown You've Got A Lovely Daughter", "I'm Into Something Good", "Can't You Hear My Heartbeat', "Wonderful World") to the bit more obscure Forgotten Hits favorites like "Listen People", "A Must To Avoid" (performed Saturday as "She's a muscular boy"), and another personal favorite "Just A Little Bit Better", a song I still believe to be one of their all-time greatest.  Non-stop fun and mayhem from start to finish ... which is EXACTLY what they are going for!

He told us that he still does his Sirius / XM Radio Program and has recently written the liner notes for a brand new Herman's Hermits compilation CD put out in Germany (but available here in The States as well both through his website or places like Amazon.com ...66 tracks covering their whole career.) He has also mended fences with the Klein family since the passing of patriarch mogul Allen B. Klein, who tied up the music of Herman's Hermits for decades, often preventing their songs from being used movies, television and advertising commercials.  Since Allen's passing, Peter has been working directly with Allen's son Jody (a sometimes FH contributor) and they truly have been working together to get this music back out to the public with several new releases planned and/or already available (including a couple of films starring Herman's Hermits, long out of print.)  All of this is being done with Peter's input this time around (as it should be) with a common goal of mining those vaults for the very best material.  (Peter confided in me that Klein always had the best mixes anyway, so he's pleased to see these releases finally seeing the light of day.  Believe it or not for the first time EVER Herman's Hermits is selling Allen Klein material at their shows ... and being compensated for doing so!  Seriously, could there be a happier ending to this story?)
When I mentioned that Alan Parsons had performed at The Arcada the previous night, Peter told me that they were neighbors ... and had recently been out celebrating Eric Burdon's birthday. 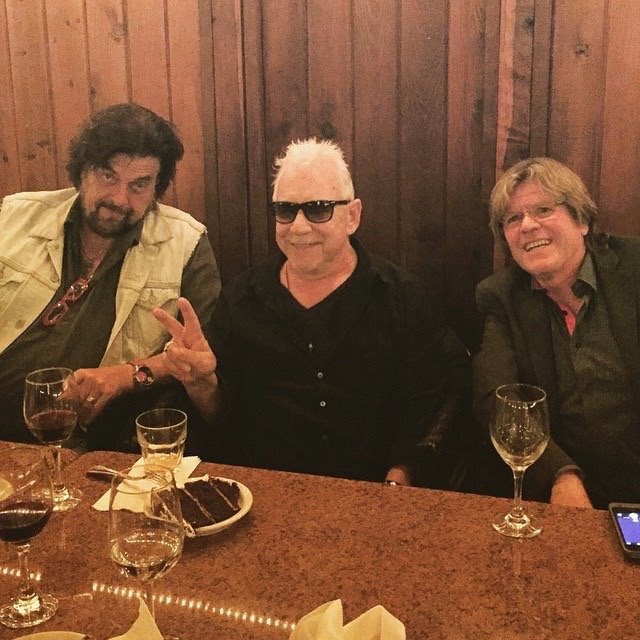 Two COMPLETELY different types of shows ... both entertaining as hell ... completely sold out and performed back to back at the historic Arcada Theatre.  Man, what a weekend we had!

COMING UP:  Peter has agreed to do an updated Forgotten Hits Interview ... stay tuned for more details ... coming soon to these pages!

WHAT ARE THE ODDS?:  Prior to the show when I returned to my seat after visiting with Peter Noone back stage, a woman to Frannie's left asked if we knew if there was going to be an opening act this evening.  Because I had just spoken to him about this subject, I told her "No, they'll be doing the whole show themselves as two sets", to which she replied, "The last time I saw him, he performed with The Ides Of March, who opened the show."  She then said, "I went to school with Jim Peterik" to which I replied, "Really?  You went to Morton West?"  "Yes."  "So did I!  What year did you graduate?  I'm Class of '71."  And, before she could answer, the woman to MY right said, "I graduated Morton West in 1971!"  We were all flabbergasted.  What are the odds that all three of us ... COMPLETE strangers ... would all be at the same concert sitting in the same row, having all graduated from the same high school?!?!?  It helped kick the show off to an even better beginning.  (Blackhawks updates throughout the night kept the fans cheering as well, since this is the night they earned their spot at the Stanley Cup Play-Offs.)  But it was the music of Peter Noone and Herman's Hermits that united us all ... and kept us all up on our feet, clapping and singing along.  For two hours anyway, we were all 17 years old again, just like Peter ... and we were lovin' it!  (kk)
Posted by Kent Kotal at 6:15 AM