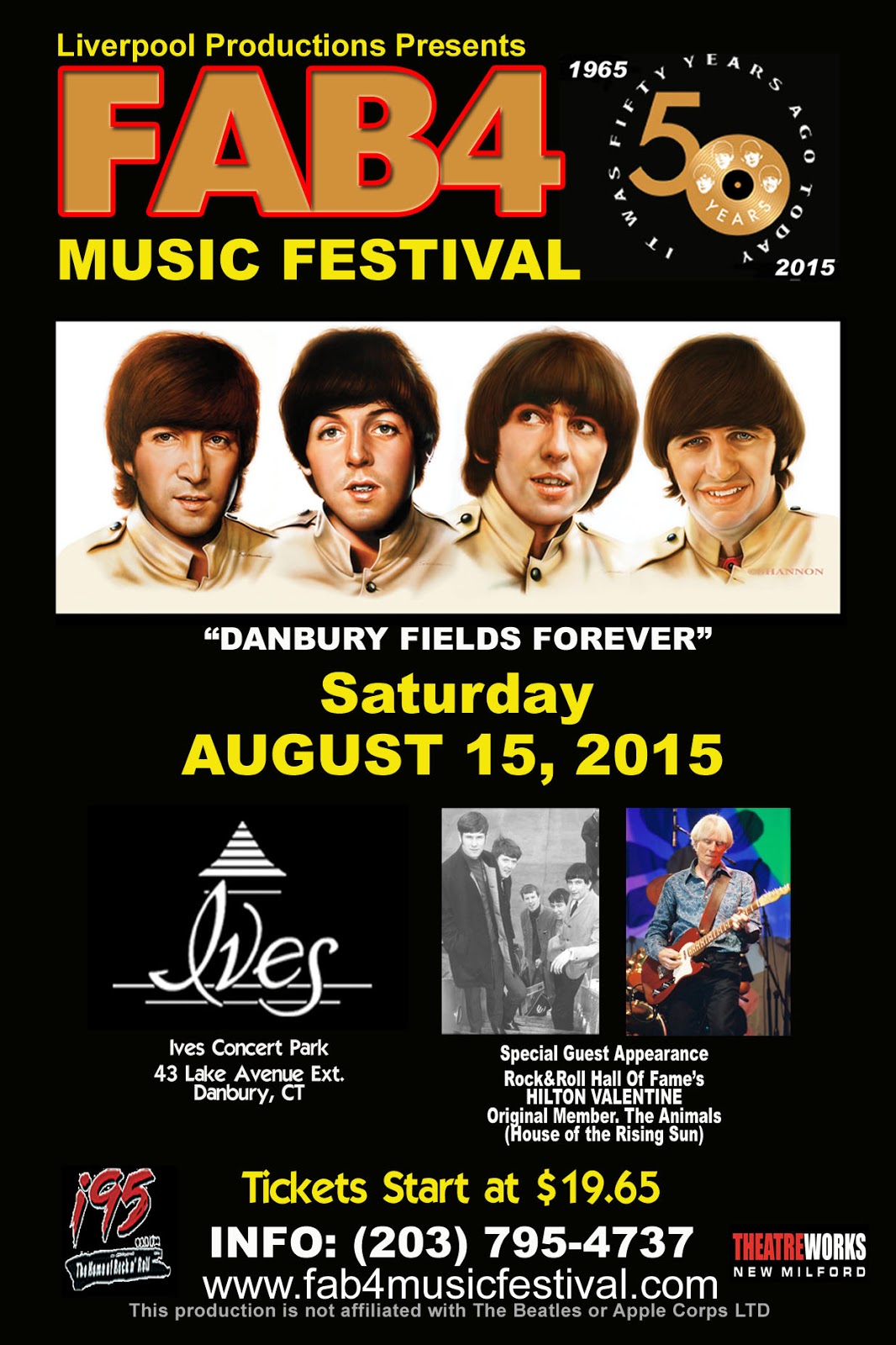 IT WAS 50 YEARS AGO TODAY, SGT PEPPER HADN'T LEARNED TO PLAY!
But the first concert at Shea Stadium was shocking the world with the effects of Beatlemania.  Sid Bernstein didn't make it to the 50th anniversary, but he had attended several others here at Danbury Fields Forever.  This year it is dedicated to him and to Dennis Ferrante who engineered John Lennon, solo artist, to newer heights after The Beatles.
This year it begins for me on June 4th, when Charles Rosenay sends me a reminder / invite.  I jump on the band wagon immediately.  One of my co-workers, also a DJ, emcees the show with Gary Theroux.  So I go to work and say, "Hey Ken, I have my ticket for Danbury Fields.  It's the 50 year Shea Stadium anniversary this year."  "Yeah, Charles Rosenay usually asks me to co-emcee so he probably will again."  "Oh Ken, he has your name on the advertisement so I would book the day off.  I already have."

And suddenly June, July and half of August are gone.  August 15th is here and I head out to Central Connecticut State College Ives Concert Park in Danbury, CT to participate in Danbury Fields Forever, 2015.  My first remark is:  More people need to know about this and utilize it!  This is the perfect place for families and friends to spend the day.  It runs from 12 - 8 pm.  There are playscapes for kids, food, drinks (alcohol and none) and an almost continuous string of performing groups paying tribute to The Beatles.  Someone slaps a VIP wrist-band on me.  This is the second time this week - both were surprises.  Nothing changes because I wear it, but it upgrades my self-esteem.  I enjoy being a viper.  WAIT!!  That should read VIP-er.

There are eleven bands that will play today.  All are co-ordinated to sing different Beatle eras.  This eliminates hearing 'I Want to Hold Your Hand' eleven times.  Nothing wrong with that, but as we discuss here on Forgotten Hits, there are so many other songs that are great.  Let's hear them all!  I cannot speak about each in turn as that is EIGHT HOURS of music and you will have fallen asleep after the fifth hour of my rhetoric.  I am going to attempt scanning and uploading photos, after I send this so hopefully, you can view this with the excitement and love I felt.

What impresses me is that there are very young performers here, as well as seasoned Beatle lovers.  There are women in some units.  It is not a march of "Beatlemania" bands, each trying to outdo the other.  They are all there to express love of and for The Beatles, who changed music history so profoundly.  The final band, 'The Hofners', are attired in Shea Stadium clothing and will give the entire Shea Stadium set list.  Clever, huh?  'Penny Lane' is performing Sgt Pepper in full dress "Pepper" jackets, 'AfterFab' performs the solo years, 'NumberNine' does psychedelic, and 'The Blue Meanies' (who performed a benefit concert for Davy Jones at BB's) get to take the stage with Hilton Valentine of 'The Animals'.  Hilton is the honored guest here today, looking and sounding great!  I have never before seen Hilton perform live.  My videos show him as the sleepy eyed (yep, probably reasons for that) swaying lead guitarist on The Ed Sullivan Show.  A security guard says to me as I snap pictures, "If you buy something, he will let you take a picture with him."  My reply is probably abnormal, "I may just do that, but it won't be just to get his picture."

I must add a personal note that I see a high school friend of my kids' who played in a Beatles tribute band with two brothers and is now still playing bass with The Hofners'.  Eleven years ago I asked him what he wanted to do with his music.  "I hope to make a living playing Paul for the rest of my life."  I cry watching him.

There are memorabilia vendors, authors signing books about The Beatles and even one on The Monkees.  You can hear the music from the stage as you wander around 'Danbury Fields'.  You can sit in a lounging chair on the grass or in a folding chair in front of the stage.  You can be in the sun or the shade.  (MAN, IT'S HOT TODAY).  Ken Michaels is an enthusiastic emcee.  "Listening to eight hours of Beatle music ... is there any better way to spend the day?!"  Gary Theroux offers his Rock n' Roll history, which may be lost on some, but I think there may be ways to showcase it and blend it throughout the day.  Ken Michaels' radio show is called 'The Beatles, Every Little Thing'.  Gary's is 'The History of Rock n' Roll'.

Charles Rosenay is my idea of a good producer.  He is visible, handling cell calls and problems, but not star casing himself.  We gotta do something about the sound system though, guys!!!  We all kidded about the crackling making it feel like a vinyl record show and thankfully you could not hear crackling during the music but each time it cut out was frustrating and time-eating.  Thankfully, Charles extended the concert past 8:00 pm so all groups could perform fully.

John and Paul met at a church fete'.  And the rest ... as they say ... is history.  What better way to honor The Beatles each year, but with a fair-like atmosphere?
-- Shelley J. Sweet-Tufano
We got this from Charles Rosenay, who has been organizing these Beatles tributes and tours for quite some time now.  (In fact, he just wrote me from Liverpool where he and a bunch of Beatles fans are visiting many of The Beatles' old haunts right now ... and promises more info when he returns home in September!)
Thanks to everyone who attended the Fab 4 Music festival this past weekend. The bands were great, the venue was terrific and everyone who came had a FABulous time.
Now we would like to invite you to REMEMBER LENNON: IMAGINE 75 on October 9, 2015, the exact date of John's 75th birthday. Great seats are now available for this very special theatrical concert event at the College Street Music Hall on 238 College Street across from the Shubert Theatre in New Haven. 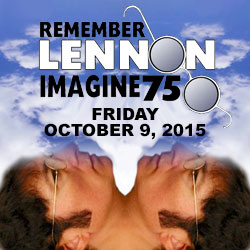 REMEMBER LENNON: IMAGINE 75 presents one of the greatest John Lennon impersonators in existence, a world-class backing band, and audio-visual accompaniment all adding up to a respectful tribute recreating the concert John may have performed had he still been with us.
With most of the world-renowned Lennon tribute acts, close your eyes and you think you're listening to John. With this production, keep them open and you'll be equally amazed. Fans from throughout the East Coast will "Come Together" to pay tribute to John on this landmark birthday.
REMEMBER LENNON: IMAGINE 75 is a unique extraordinary musical theater experience celebrating the music, the memory, the magic and the LIFE of John Lennon. Don't miss this once-in-a-lifetime concert event.

Imagine ... 75.
Website : www.Imagine75.com
Info: 203.795.4737, Liverpooltours@aol.com
Tickets: www.ticketfly.com/purchase/event/912153
"Like" us on Facebook: www.facebook.com/pages/Remember-Lennon-Imagine-75
Invite your friends on our Facebook "Event" page : www.facebook.com/events/411793212346086
We also heard from Gary Theroux, who has MC'd the Danbury Fields Forever extravaganza for the past couple of years ...
Liverpool Productions produced the “Danbury Fields Forever: Fab 4 Music Festival” Saturday, August 15, at Ives Park in Danbury, CT.   For the second year in a row I hosted the show, accompanied by Beatles expert Ken Michaels, who has helmed his own Beatle-themed “Every Little Thing” radio series for more than 30 years.
The day was a scorcher – over 90 degrees – but that didn’t stop multitudes of Beatle fans of all ages from coming out to celebrate the 50th anniversary of their favorite group’s legendary 1965 Shea Stadium concert.  All day and into the night the crowd was serenaded by a wildly diverse array of Beatle cover bands and soloists, all of whom took turns giving their own spin to songs John, Paul, George and Ringo recorded either collectively or as solo stars.
The featured bands were The Blue Meanies, The Hofners, Penny Lane, Number Nine, The Oh Nos, AfterFab, The Navels, StrictlyBeatles and The School Of Rock.  Eric Herbst from DizzyFish and Nekita Waller also performed.
A special treat was the presence of Hilton Valentine, who played lead guitar as a key member of The Animals on their 1964-6 hits (“House of The Rising Sun,” “I’m Crying,” “Don’t Let Me Be Misunderstood,” “It’s My Life,” “Don’t Bring Me Down,” “We Gotta Get Out Of This Place”).
Hilton had a booth among the many vendors where he was signing memorabilia and had not intended to perform.  Fan encouragement, though, finally drove him to mount the stage for two numbers, including John Lee Hooker’s “Boom Boom” (which The Animals had revived in late 1964).
Hilton looked almost ghost-like -- quite pale and frail as he strapped on his guitar -- but clearly he has not lost his finger-pickin’ prowess.  Hilton and I spoke briefly in the wings afterward and I hoped to score a post-show interview with him but as his wife was tired Mr. and Mrs. Valentine wound up leaving shortly after his brief set.
-- Gary Theroux, "The History of Rock 'n' Roll"
And while all of this was going on on The East Coast, here in Chicago we were celebrating the 38th Annual Fest For Beatles Fans (which will ALWAYS be known as "Beatlefest" to me, no matter WHAT they call it!!!)
FH Reader (and noted rock photographer) Mike Bush told me that the line of fans waiting to meet Dick Biondi was the longest line at the entire event.  (He is SO well-loved here in Chicago!)
Dick was signing simulated copies of the original WLS Silver Dollar Survey that first charted The Beatles' "Please Please Me" in March of 1963.  Several years ago, Forgotten Hits proved definitively that Biondi was the first disc jockey in America to play a Beatles record on the radio the month before.  Incredibly, Dick is still on WLS (albeit the FM station) all these 52 years later ... and was just the host for The Happy Together Concert in Bolingbrook a few weeks ago.  (I swear this guy has more energy than I do ... and he's 186 years old!!!)  kk 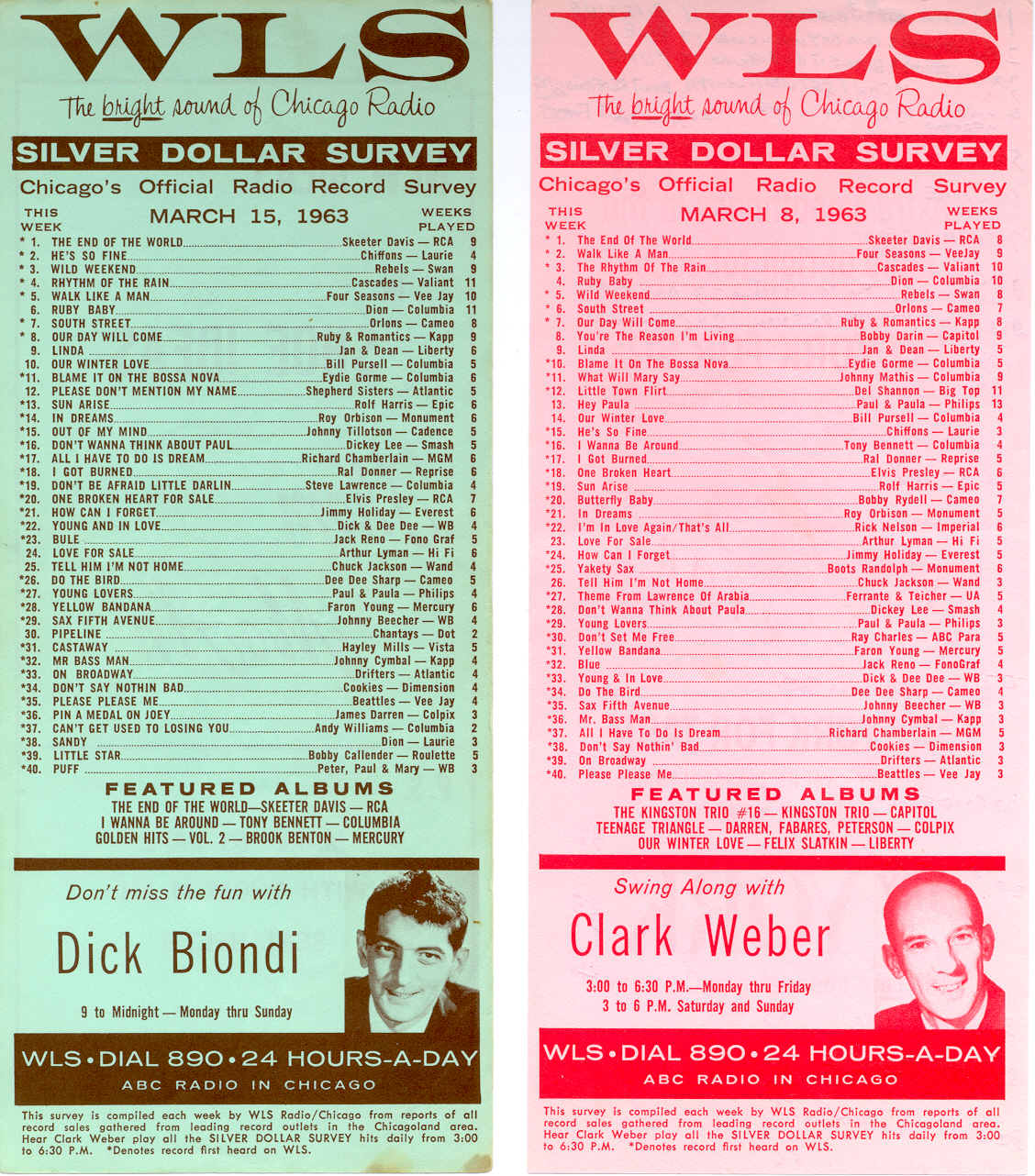 http://forgottenhits.com/who_played_the_very_first_beatles_record_in_america
Posted by Kent Kotal at 7:00 AM