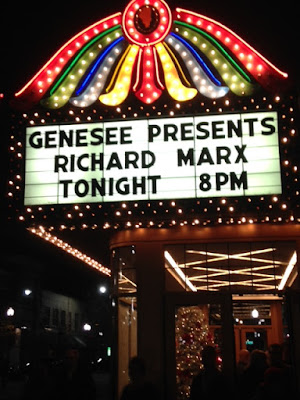 We had the pleasure of seeing Richard Marx, live in concert, at The Genesee Theatre on Friday Night (December 4th).  It was a one-man show ("We don't need no stinkin' band!"), performed to a near full house of appreciative and adoring fans (save the now apparently prerequisite drunken, belligerent audience members who seem to show up at nearly every show we attend lately, convinced that, along with the purchase price of their tickets, they have also earned the right to totally disrupt the performance by making complete asses of themselves, thus ruining the concert experience for everyone else in the theater, who simply bought THEIR tickets because they love the music, the artist, and came to see the show.)

And, let me tell you, this guy was a piece of work ... he just wouldn't let it go.  However Marx, who was INCREDIBLY entertaining, witty and charming throughout the evening, gave it right back to him.

After numerous other outbursts (at which point Marx reminded him, "Hey ... [pointing at himself] ... THIS is the voice these people came to see", this guy screamed a few times, "My brother knows you", finally stopping Marx in his tracks and forcing him to confront and address the interruption.
"Really?"
"Yeah, my brother knows you, man."
"No he doesn't."  long pause ... "What's his name?"
"Jamie."
"Jamie doesn't know me ... Jamie's full of shit" ... to which the audience applauded as loudly as they had for every song Marx had performed thus far.

I can tell you that Richard Marx was in EXCELLENT voice ... no, PERFECT voice Friday night.  He has such a clean, clear tone, with just the right amount of grit added when and where necessary to make every song a stand-out.  And playing in the stripped-down environment as he did, carrying the entire weight of the show on his shoulders, you heard each and every nuance throughout the evening.  (No doubt about it, the boy can sing!!!)

Knowing Marx's catalog (he charted 18 times in Billboard over a ten year period between 1987 and 1997, scoring 14 Top 20 Hits, 9 of which made The Top Ten, including three in a row that went all the way to #1) I was concerned about how some of this music would sound in this stripped-down, unplugged format.  Some ("Endless Summer Nights", the show opener) worked better than others ("Satisfied", song number three, that just needed a little more punch to be truly effective.)

Still, hearing these songs stripped down to their bare essence always presents the interesting perspective of "This is how these songs sounded the day Richard wrote them," which, for me, is a very keen insight into that whole process.

That being said, when you have SO many ballads in your repertoire, it can get a little stale after awhile.  And the repeated encouragement for audience sing-along participation wears a little thin after awhile, too ... (to paraphrase the lead performer, "YOURS is the voice we came to hear.)  Although we never quite reached "Day-O" level, there were a couple of moments that came close.


However, it is VERY clear that Marx gets it ... he told one entertaining story after another between songs ... and really had the perfect rapport between performer and audience throughout the evening.  The comfort-level was incredible ... it was as if you were sitting in the living room with an old friend ... totally relaxed and just kicking back for the evening, talking about the old days interspersed with a musical number here and there (albeit an old friend that has won numerous Grammy Awards, sold thirty million records, lived in an 18-million dollar mansion and was married to Cynthia Rhodes, who starred in "Dirty Dancing" as well as several other films.)  "I've been to this theater many times before to see shows but this is the first time I've ever played here.  I used to live just 14 minutes from here in Lake Bluff."  He also understood why the audience was here ... "I go to a lot of concerts so I know what you want to hear.  I'm going to play a couple of new things for you ... but just a couple ... 'cause I know you guys want to hear the hits" ... and that's exactly what he did.

When he first took the stage, he immediately addressed the audience ... "I don't care what the signs say or the tickets say ... take as many pictures as you like ... record the show and post on YouTube when you get home tonight ... I got into show business because I wanted attention ... hey, I even put product in my hair tonight ... so snap away!"  A sea of flashes from the audience followed ... and we did find some pretty good YouTube clips to share as well.

Pretty much all of his hits were represented ... my personal favorite, "Hazard" was accompanied by a background video and a long story about how, when he first wrote the song, he felt it was crap and, at best, album filler ... a failed attempt on his part to write a musical murder mystery ... that then went on to reach #1 in fourteen different countries!, "Now And Forever", "Hold On To The Nights", "The Way She Loves Me", the aforementioned "Endless Summer Nights" and "Satisfied", the rockers "Don't Mean Nothing" and "Should've Known Better", both of which played WAY better than I imagined they would in an acoustic setting, and then one of the highlights of the evening, "Angelia", which just happens to be one of my LEAST favorite Richard Marx songs but, without question, became one of the best songs he performed all night, if only because of the unique way in which he decided to present it.

Marx went on and on all night, raving about how beautiful a theater the The Genesee is ... and it truly IS remarkable ... click back to some of our Brian Wilson coverage to see just how AMAZING a place this really is ...
http://forgottenhits60s.blogspot.com/2015/10/brian-wilson-concert-ticket-give-away.html ...
and then, in an effort to show how acoustically perfect the theater really is, he decided to "try a little experiment" ... at which point he unplugged ... literally and figuratively ... first his guitar, and then, stepping away from his microphone, he moved to the front of the stage, and performed "Angelia", walking across the full length of the stage to address every section of the audience personally, all the while perfectly executing a performance of his Top Five hit.  Yes, it was hard to hear ... you really had to listen ... but it was beautiful ... and INCREDIBLY effective, too ... especially coming on the heels of the altercation with the idiot audience member mentioned above.  The audience muted to "you could hear a pin drop" level ... and the absolute purity and essence of Marx's voice came out, making this TRULY one of the highlights of the show.

Marx comes from a musical family ... his father was a very successful jingles writer and his three sons (Brandon, Lucas and youngest son, Jesse, who was in the audience Friday night ... and yes, that WOULD make them The Marx Brothers) have followed suit and kept the family tradition alive by becoming musicians themselves.  At one point Richard showed a video of his sons in the studio, accompanying him on one of his newer songs, "Save Me",  which he performed live along with the "all in the family" backing track. (Unfortunately, as effective as this was on the one hand, it also pointed out again how much more powerful some of these performances could have been had Marx been performing with full musical back-up ... even it it were only for a short six-song set with his sons on back-up to fill in some of the gaps missing in an all-acoustic set-up ... a chance to shake things up a little.)

In addition to selling over thirty million records under his own name, Richard has also won numerous awards and continued to make the charts by writing with and producing several other artists ... among them N*Sync, Luther Vandross and, more recently, country artists like Keith Urban and Vince Gill (who has a brand new track out right now, "Take Me Down", that Marx cowrote.)

Below, he explains the launching of his career ... and talks about the Grammy-winning song he wrote with Luther Vandross, which would turn out to be the last song Vandross ever wrote.


He then performed a number of songs he wrote for other artists, many of which went over extremely well with the apparently quite country-savvy audience.  (His story about working with N*Sync in the recording studio down in Orlando, Florida, was especially entertaining.)

The Genesee show was Richard's last concert of 2015 ... so he ended the year on an extremely high note.  There was a genuine, mutual love and respect on display that night between the audience and the performer ... and I'm so glad we got to go.  (Incredibly, The Genesee Theatre had given me TEN PAIRS OF TICKETS to giveaway to our readers [Thank you, Colleen!] ... and we didn't have a single taker ... not even for FREE tickets!!! All I can tell you guys is that you missed one HELL of a show.)

Leaving you with another one of my Richard Marx favorites ... just listen to his voice on this one ... and you'll get some idea as to how he sounded in concert ... every bit as good ... or better ... than the records themselves! 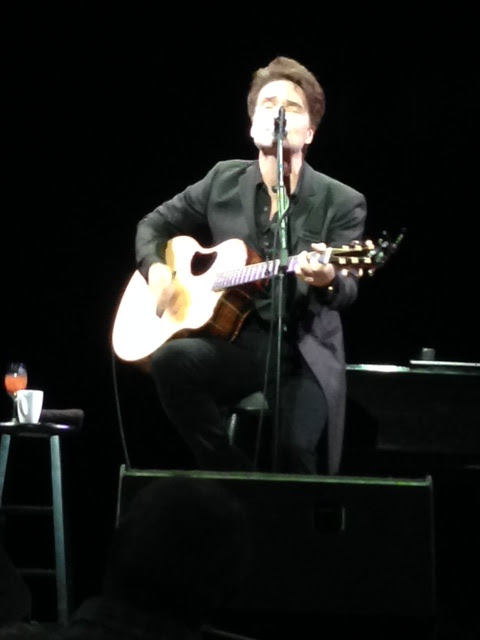 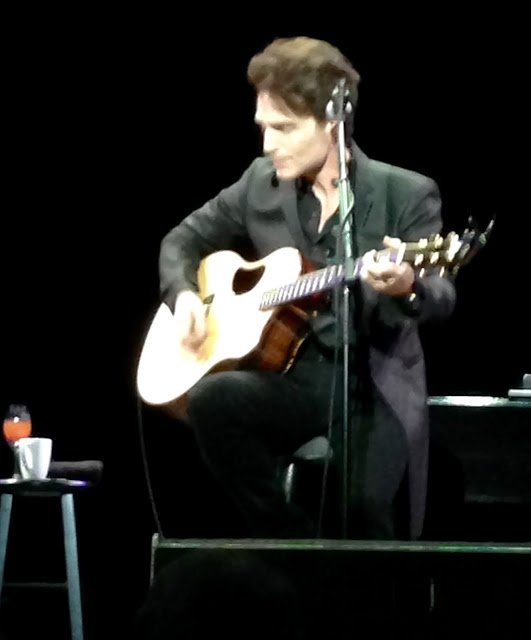