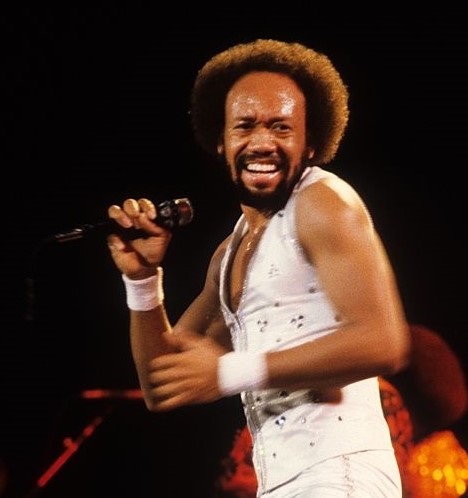 It has become almost impossible to preplan anything for Forgotten Hits these days.

I can't remember ever having gone through this kind of rash of celebrity deaths like we have already in 2016.  Maurice White, founder of Earth, Wind and Fire, is the latest casualty ... but in the last 90 days we have lost Natalie Cole (December 31st), Robert Stigwood (January 4th), Troy Shondell (January 7th), David Bowie (January 10th), Gary Loizzo of The American Breed (January 16th), Glenn Frey (January 18th), Paul Kantner and Signe Anderson, both original members of The Jefferson Airplane (January 28th) and now Maurice White of Earth, Wind and Fire (February 4th).

And that's not all.  Also gone during that same 90 day timeframe are Andy White, the session drummer who appears on The Beatles' first single "Love Me Do" / "P.S. I Love You" (November 9th), New Orleans legend Allen Toussaint (November 9th), Martin Beard of Sopwith Camel (November 10th), songwriter P.F. Sloan (November 15th), Cynthia Robinson of Sly and the Family Stone (November 23rd), Ronnie Bright, the bass voice on the hit "Mr. Bass Man"  (November 26th), Luigi Creatore, one half of Hugo and Luigi who produced a number of acts like Sam Cooke, Perry Como and The Stylistics and wrote Elvis' big #2 Hit "Can't Help Falling In Love" (December 13th), Producer Snuff Garnett, who produced hit records for Bobby Vee, Gary Lewis and the Playboys and Cher (among many others) December 17th, William Guest (one of the Pips), December 24th, Little Stevie Wright of The Easybeats (December 27th), Jerry Dwyer, who owned the plane that crashed and took the lives of Buddy Holly, Ritchie Valens and The Big Bopper (January 16th), Mic Gilette of Tower of Power (January 16th) and Dale Griffin of Mott The Hoople (January 17th)

Once again, losing Maurice White hits close to home, having lived in Chicago my whole life and had a couple of personal run-ins with Earth, Wind and Fire back in the early days of their career.  (More on this later)

I have mentioned several times before in the past that somehow ... for SOME reason ... Earth, Wind and Fire always seem to be overlooked when people talk about the great music that came out of Chicago, Illinois.  They were, however, recognized by The Rock And Roll Hall Of Fame in 2000, the first "contemporary" act from Chicago to be inducted.  (Several Blues Greats have "Early Influence" honors ... but EWF got in on their driving and innovative sound.  That fact that Chicago is finally being inducted this year after decades of snubs makes it all so much sweeter.  These two bands are performing together in one of the biggest tours of the summer ... and it'll be a KILLER show ... but White wouldn't have been participating anyway due to health issues that have plagued him for years.)

Maurice White was a session drummer for the legendary Chess Records here in Chicago in the 1960's.  (It's his drumming you hear on the Billy Stewart hit, "Summertime" ... and he's backed up many a soul superstar along the way.)  When Isaac "Red" Holt left The Ramsey Lewis Trio (along with Eldee Young) to form The Young-Holt Trio (later Young-Holt Unlimited), Maurice was brought in to fill Red's spot on the drums ... and he appeared on the next nine Ramsey Lewis Trio albums.

White left in 1969 and, along with his brother Verdine formed a group called The Salty Peppers.  It didn't last very long, however ... the two brothers moved to Los Angeles to try and make it there, dumped everyone else in the band, hired singer Philip Bailey and evolved into Earth, Wind and Fire.

White had been battling Parkinson's Disease since 1992.
He reportedly died peacefully in his sleep early Thursday Morning, February 4th at the age of 74.

Growing up here in Chicago, I had the opportunity to cross paths with some of the members of Earth, Wind and Fire back in the early-to-mid '70's, right before they became a pop sensation.

We would run into the band from time to time at Monty's Music on St. Charles Road in Berkley, IL ... Monty's was our favorite place to shop for musical instruments and, although many of these memories are now fuzzy at best, I'm guessing this would have had to have been sometime in 1973.

Whenever EWF would come into Monty's they were the center of attention.  They had already been out to California and landed a record deal ... but there was a certain camaraderie between musicians that allowed you to always cheer for the other guy ... tell 'em to "keep on practicing" and "don't give up the dream" ... so when we would see them it was always kind of a nod and "How ya doin'" sort of thing.

The most memorable time of all was the night we pulled in to pick up our brand new Kustom PA System ... all shiny and glittery bright blue with all the foam padding everywhere ... it was our dream PA (and, in hindsight, not a very good one) ... but it SURE was cool to look at.  We took a bit of ribbing from the EWF guys as we carried it out the door in multiple trips ... I mean this sucker was HUGE (and, again in hindsight, not at all practical!!! lol)

Flash forward about a year or year and a half and we had the opportunity to play a show at McCormick Place where Earth, Wind and Fire would be the headliners.  The name of my band at the time was Kumsah ... (our banners and posters read "Come See Kumsah" ... pretty clever to my 20 year old mind.)

I'll never forget this part because the show was being put on by "The Church Of What's Happening Now" ... for real!!! ... and it was (in hindsight ... LOTS of hindsight creeping in to tonight's posting) a bit of a scam really.  The idea was that each band booked to play had to sell tickets to the show.  Tickets were priced at $5 each ... not bad little fund-raiser considering that, when all was said and done, the agency had booked something like 40 back-up bands in addition to the headliners.  Each band had to buy their blocks of tickets in advance ... in effect, PAYING for the right to perform on the same stage as EWF.  We paid $2.50 a pop ... then when you sold them for five bucks, the band got to keep the difference.  The number of tickets you sold determined how much you got paid for your performance that night.  (And any unsold tickets were YOUR loss because the promoter had already been paid his money upfront.)

We didn't care ... we were kids playing at McCormick Place ... between us we probably sold twenty tickets, which meant that the band split $50 five ways.

We had to get there around 11 am and each band would set up the bulk of their equipment backstage so that you could do faster change-overs between acts.  Every band was allowed to play three songs so we went through the tough backstage ritual of trying to determine what were our best three songs that might make an impact on this crowd.  (With 40 bands selling tickets the audience was pretty full!)

Turns out we had plenty of time to argue (and rehearse) backstage ... cramming 40 bands through this ritual took forever ... but hey, we were going to be backing up Earth, Wind and Fire at McCormick Place, dammit, and that meant that we were on our way to becoming stars in our own right.

Our band kept getting pushed back ... I can't state with 100% certainty that we were the only white band there that day ... there may have been two or three others ... but the predominantly black crowd drawn in by The Church Of What's Happening Now's television preacher tipped the scales quite a bit.

By the time it was 8:00 even our own guests were ready to leave ... but we hung in there, assuring them that we'd be going on stage any time now.  Also getting frustrated were the headliners.  Although Earth Wind and Fire hadn't spent the whole day in the backstage trenches with all of us wannabes, they wanted to take the stage at 8:00 and get their set over with ... so that's exactly what they did.

They played their half hour to 45 minute set and then they were gone ... and with them went about 90% of the audience ... who (other than each band's closest friends and family) had only come out to see Earth Wind and Fire perform in the first place.

By the time we FINALLY took the stage there may have been 30 people left in the audience ... and maybe two of them were Kumsah fans.  Exhausted, we played our three songs, packed up the equipment and left.

All in all a pretty low, defeating moment ... until one considers that ... on THAT particular day anyway ... Earth Wind and Fire opened for US in concert.  (At least that's the way WE chose to remember it.)

Rest in peace, Maurice ... and thank you for the music.