ELO has the #1 Album in Great Britain right now as their greatest hits package "All Over The World", first released nearly twelve years ago, moves into the top spot on The British Albums Chart.  (It's their first #1 Album in 35 years!) Sales were boosted by Jeff Lynne's ELO appearance at The Glastonbury Festival.  (The LP peaked at #6 when it was originally released in 2005.)
We can't WAIT to see Jeff Lynne when he finally tours The States.  (Right now we're only seeing dates for Los Angeles (The Hollywood Bowl) and New York (Radio City Music Hall) ... but are hopeful that he'll also criss-cross the country at some point and make a stop here in Chicago.)
His live DVD Concert is amongst the best we've ever seen ... and their music seems more popular than ever.  (Catch our review here:  http://forgottenhits60s.blogspot.com/2015/09/jeff-lynne-live-in-hyde-park-dvd.html)

Pat Upton passed away on Wednesday, July 27th - Upton was a member of Spiral Starecase and wrote their biggest hit "More Today Than Yesterday".  In 1983, he opened a club called PJ's Alley which, a short time later, became the last place Rick Nelson performed before his tragic plane crash on New Year's Eve, 1985.  "More Today Than Yesterday" is one of those songs that has played constantly since its release in 1969 ... it's just a real good / feel good track.
More here in an article submitted by Tom Cuddy:
http://www.gadsdentimes.com/news/20160727/musician-geraldine-native-pat-upton-dies-at-75

Kris Kristofferson has just been booked to perform for three nights at The City Winery, January 16th, 17th and 18th - tickets go on sale to the general public on Thursday, August 4th.

>>>Perhaps someone might have an idea who recorded a version of "The Theme To A Summer Place" that I am trying to identify. It is a male vocal that I recorded off the radio in the late 60s or early 70s; I still have a copy if someone wants to give it a listen. The song was recorded by a lot of folks but not too many male solo vocalists. I have ruled out Cliff Richard, Dick Roman and Andy Williams. Jackie Rae also released a version around 1960 and the only small audio clip of him that I can find is not the version I am after; however, the clip could be from a re-recording.
(Earl Thompson)
>>>This could be a tough one as literally HUNDREDS of artists recorded this song over the years.  Why don't you send us the clip and we'll run it on the website and see if anybody recognizes it.  (kk)
Here is the mystery version of Summer Place in MP3 format. You are correct in that it has been recorded by a zillion folks ... however, I can only find a handful of male solo vocalist that have recorded it and none of those are the mystery artist. Again, I recorded this probably before 1970 or thereabouts.
Fingers crossed!!!!
Earl


Let's see if anybody recognizes this vocalist!  (kk)

Kent,
Commenting about Nina Simone in today's FH, I always did like, believe it or not, her 1959 recording of I LOVES YOU PORGY. I am not sure but I think she re-recorded it later on in the sixties on the Phillips record label but I am not sure. Loved her original though on Bethlehem Records.
The song you have listed in her CD Track Listing, SINNERMAN ... I am wondering if that's the same song that singer Tommy Sands (remember him?) recorded in 1959 while he was with Capitol? Both songs I have mentioned were fairly big here in OKC back in their day. I agree with you in that I always liked the Cryan' Shames' I WANNA MEET YOU, even though it wasn't all that big a record here in OKC. I did not know they had recorded UP ON THE ROOF. Just played it on you tube and not a bad version at all.
Larry
Both versions of Nina's "Porgy" charted ... the 1959 version reached #11 on the Music Vendor Chart (the precursor to Record World ... it topped out at #18 in Billboard) and the 1964 version (on  Phillips Records as you suggested) was a re-recording and "bubbled under" for exactly one week at #148 in the same trade publication ... which was the only place it charted.
Nina didn't have a lot of success crossing over to the pop charts ... after her 1959 debut with "I Loves You, Porgy", she never reached The Top 50 again ... but she was nominated (fifteen times) for Grammy Awards in the jazz category.
The Cryan' Shames hit our Chicagoland Charts eight times between 1966 and 1969 ... and six of those made The Top Ten.  ("It Could Be We're In Love" topped the WLS and WCFL Chart for four weeks ... their version of "Up On The Roof" peaked at #7 as its follow-up.)
They were always considered to be the premier vocal harmony group that the other local bands aspired to  ... and their version of "Up On The Roof" is a good example of why.  (kk)


Lead Vocalist Tom Doody (Toad) sent me this after we ran Thursday's Comments Page ... he still makes spot appearances with the band from time to time ... and was with them for the PBS Cornerstones Of Rock taping as well ... as were Jim Pilster (Hooke) and James Fairs, who wrote a great deal of their original material.
Thanks for the kind words, Kent.  I consider myself blessed to have been the one who sang those great songs.
toad

Kent,
Enjoyed Friday's FH and was kind of curious as to what songs didn't make the cut. Even before I scrolled down from song #1, the first songs I thought of immediately were WILD WEEKEND, WILD, and WALK ON THE WILD SIDE, the Brook Benton version as well as the instrumental version by Jimmy Smith.
Larry
When we first took a walk on the wild side a couple of years ago, we came up with about fifty titles that qualified ... but once again, within the confines of a Sweet 16, we're limited as to what we can feature.  Other great tracks we had to leave off include other noted versions of "Wild Thing" (Senator Bobby and Jimi Hendrix ... how's THAT for a variety of programming?!?!?), "Wild Wild Life by The Talking Heads, Theme from "Wild Angels" by our FH Buddy Davie Allan, "Wild Wild West" by Will Smith, "Having A Wild Weekend" by The Dave Clark Five, "Wildwood Weed" by Jim Stafford, "Real Wild Child" by Ivan / Buddy Holly, "Runaway Child, Running Wild" by The Temptations and even "Break My Stride" by Matthew Wilder ... plus at least twenty or thirty more!  Always a tough call ... but fun putting these things together ... and (hopefully) inspiring a few of the jocks on the list to think outside the box once in a while when programming their own music sets.  (kk)


Hi Kent -
An energetic crowd waited anxiously to hear legendary singer / songwriter Jimmy Webb at Hoover Auditorium in Lakeside, Ohio, on July 28th.  The show was titled, "The Glen Campbell Years", which pretty much held true.  Jimmy talked about his early days on the farm in Oklahoma, how he got into songwriting, and, of course, how he met Glen and their partnership and friendship over 50 years.
Jimmy did not disappoint, starting the night with Galveston, and performing a number of hits including Wichita Lineman, By The Time I Get To Phoenix, Highwayman, The Moon Is A Harsh Mistress and Postcards From Paris.
He also talked about his time at Motown, and also hitting the motherlode with The 5th Dimension with Up, Up and Away, scoring HUGE at the Grammys.
He wrapped up the set with a great performance of MacArthur Park, which included video of Glen on guitar accompanying Jimmy.
A real pleasure to see a great songwriter and hear his music and stories.
Tom Apathy
PS - Seeing Mark Farner of Grank Funk Railroad tonite! 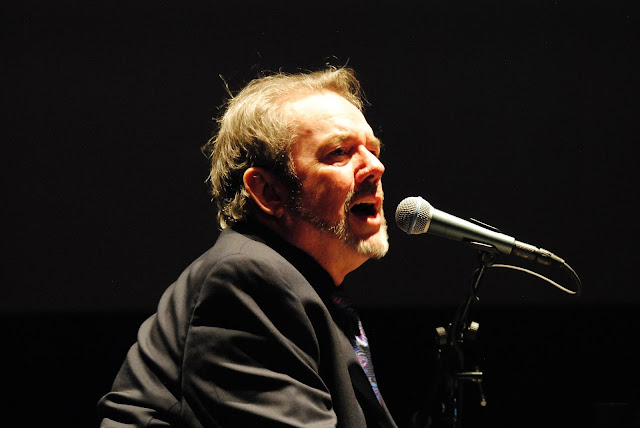 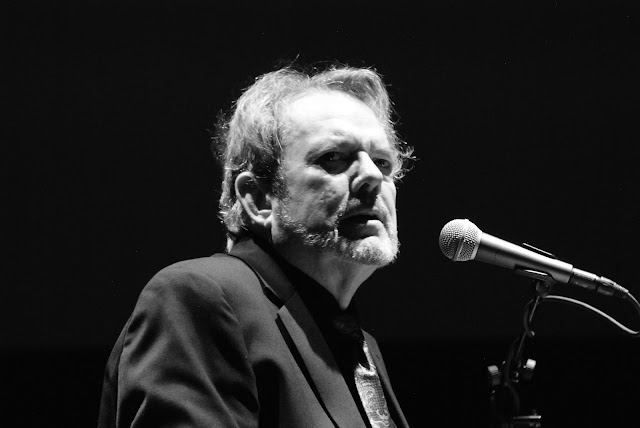 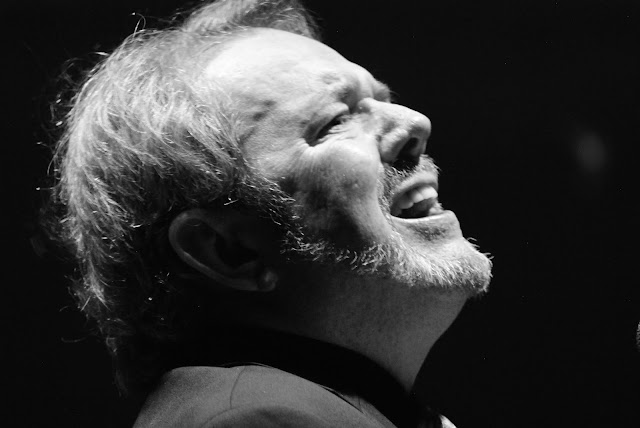 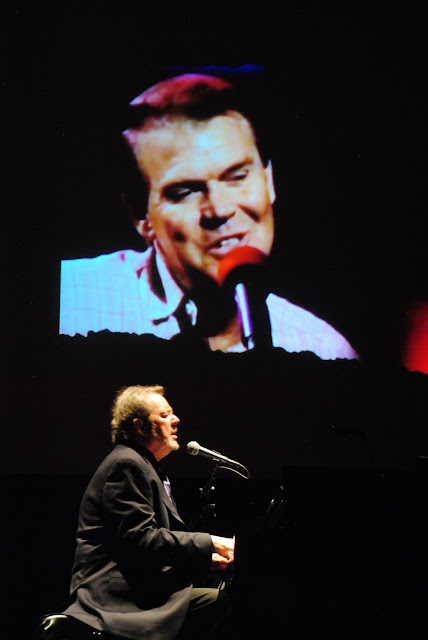 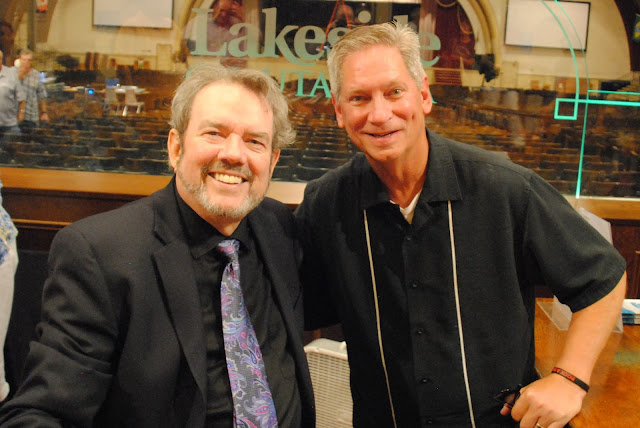 Jimmy did a show here recently at The City Winery ... I wasn't able to attend but I'm sure he's a fascinating story teller.  You've got some GREAT (and very artsy) shots here, Tom ... thanks for sharing!  (And send us some Mark Farner pix, too!)  kk

Limited postings over the next couple of months ...

Beginning on Monday, August 1st, we'll be working on various other projects including a MAJOR clean-up here on the wesbite (in hopes that fewer old issues will make for fewer problems posting the new stuff ... lately I seem to have an issue on a daily basis with Blogger changing my fonts, colors, sizes, spacing, etc ... and what should take 20 minutes sometimes now takes an hour and a half!!!)

This'll take awhile so stuff won't disappear overnight ... but we are going to take a long, hard look at what to keep up here over the next few months ... so even if we're posting a daily Forgotten Hit to keep the format alive ... along with assorted special features like SWEET 16 and 50 YEARS AGO TODAY ... you'll have PLENTY of time to catch up on anything you may have missed over the past eight years or so.

SUGGESTION:  If you have a particular topic of interest, type it into our search engine and let those come up first ... we have covered SO much ground over the past 17 years, eight on this website, that I don't think you'll EVER be lacking for something to read!!! lol
Posted by Kent Kotal at 11:33 PM