Got to speak with Matthew Nelson about his father Ricky Nelson's music and legacy. The Nelson twins (who had a #1 hit in 1990 with "Love And Affection") are back on the road with the "Ricky Nelson Remembered" show, where they perform his songs and play video clips that reveal details about his extraordinary life.

One of the songs Matthew talked about is "Lonesome Town," which is one that always hit me hard. Like most of his songs, it's one Nelson didn't write but certainly connected with.

Let's take a song in his early career, like, "Lonesome Town." A Baker Knight song. Great song. Baker Knight was penniless when my dad met him, loved his songs, brought him into the fold and basically gave him and his family a life. He was very proud of that. And unlike Elvis, he never took publishing for doing one of his writer's songs. It would have been a much better business move, but he didn't think it was fair. He said, "I make enough money playing the songs, playing concerts, and getting the artist share of royalties."

But that song, "Lonesome Town," he connected with it plain and simple, because the song is melancholy. It's really melancholy. And our pop identified with that, because he grew up famous and really deep down, even though he was a really affable, sweet guy, he told me he could never really tell who was in his life for the right reasons, as you can imagine. So he really tapped into the song. "There's a place where lovers go to cry their troubles, and they call it Lonesome Town, where the broken hearts stay."

There was obviously a little echo of "Heartbreak Hotel," but it was way deeper, I think. "Heartbreak Hotel" was a very sexy, almost tongue-in-cheek kind of thing, and "Lonesome Town" was like, "Man, I've got a broken heart that I drag around with me on a daily basis and nobody can understand but me." Our pop had a little bit of that.

We also covered Ricky Nelson's take on songwriting, something he didn't do until later in his career.

Here's what Matthew had to say about that:

We got a chance to really communicate more through music than anything - I loved to talk to him about music and he loved the fact that Gunnar and I were playing music. We opened the show for him a couple of times when he was in LA.

I thought it was such a copout or that he wasn't listening, and when he was gone, I realized what he was trying to say is, "You'll get better the more you do it and you've got to believe in the subject matter, even if it's a straight-up pop song." So it was basically about persistence and integrity, and just being part of the music. Do that and it will happen.

But I asked him about songwriting. I said, "Why did you start so late?" And in a nutshell, he said, "Listen, I would have given away all of my #1 records that I had early in my career for 'Garden Party,' because it was a part of me. If you continue to write songs and you're lucky enough to have a hit with a song you wrote, you'll know what I'm talking about, because there's nothing like that feeling."

He said, "Hey, it felt great to have hit records other people wrote for me. But when you've written something that becomes a part of people's lives, a part of their soundtrack, there really is nothing like that. I still get a rush every time I hear one of my songs on the radio."

Looks like there's a Chicago date in September - here's the tour info:
http://www.matthewandgunnarnelson.com/nelson-tour-dates/

The full interview is here:
http://www.songfacts.com/blog/interviews/matthew_nelson/

We've seen them a few times now -- twice with the "Ricky Nelson Remembered" show and once with their Christmas show -- and got to meet them and talk to them backstage at one of these, too.  (You'd be hard pressed to find a bigger Rick Nelson fan than me ... I've got everything he ever did and was fortunate enough to see him in concert at least six or seven times!)

These guys are so incredibly talented ... their vocal blend is second to none ... they should be HUGE stars in their own right ... but their niche is almost impossible to identify ... and with today's mindset of narrow-minded broadcasting, they just don't fit ... and that's a shame ... most of the world is missing out on their incredible gift. 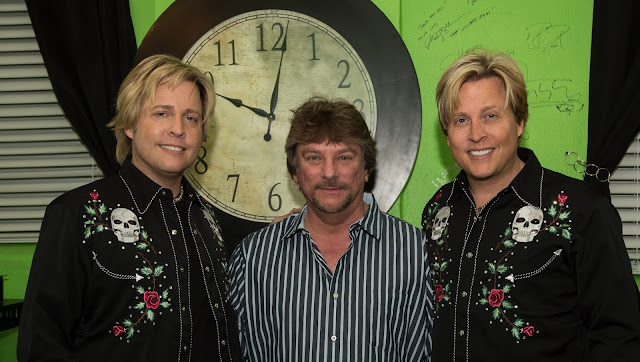