Kent:
You might want to advise your readers that the Cornerstones of Rock concert that PBS filmed in Chicago is starting to air in other U.S. markets.  It will be broadcast in New York this weekend (Saturday, Aug 27, 10pm, WLIW-TV) -Tom Cuddy 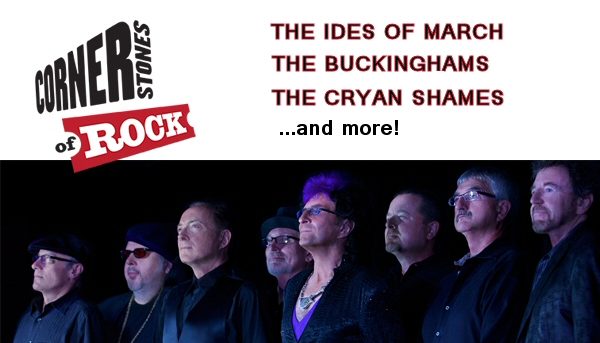 It's about time!!!  Actually, it's been airing on various Midwest PBS stations for a while now so this is great news ... soon this music will be rediscovered (or discovered for the very first time) all over the country and our Local Heroes will soar yet again.
The live show at The Arcada next weekend is a complete sell-out ... again ... EVERY show they've done has sold out immediately.  (I'm bummed because I can't even get in to see these guys!!!  When tickets first went on sale some six months ago, I knew we couldn't go because we had Labor Day Weekend plans to be out of town ... then about a week ago those plans fell through ... so now I'm kicking myself 'cause I can't get in to see them ... I've missed EVERY show they've done so far due to scheduling conflicts ... but if this momentum keeps going, there's a good chance they'll be back soon.)
Hey Ron ... how 'bout if I MC the show???  Would that work?!?!?  (kk)

Kent,
Thanks for the kind words and great review. You really captured the creative essence of the CD.
If you get a chance, check out my new venture ... I thought it was a good idea. There are so many great songs that, for one reason or another, never became a hit. I think they should be heard.
Lou Christie
http://www.itshouldhavebeenahit.com/
I think this will go over great with our audience.  There are a couple of jocks on the list who have dedicated themselves to providing the opportunity for music lovers to hear and enjoy many of these great "shoulda-been-a-hits" that slipped thru the cracks for whatever reason the first time around.  Maybe we can get Rich Appell and Dave The Rave on board to help promote this site ... you may get more great suggestions than you ever bargained for!  (kk)

Hi Kent,
Got something I suspect that you'll be interested in.  My old friend Dean Torrence is hitting the bookstores on September 6 with Surf City: The Jan & Dean Story ...
https://www.amazon.com/Surf-City-Jan-Dean-Story/dp/1590793951/ref=sr_1_1?s=books&ie=UTF8&qid=1472161602&sr=1-1&keywords=surf+city+the+jan+and+dean+story.
I've read a few chapters and it's quite good, plus he's beating the Mike Love and Brian Wilson autobios to the shelves by a few weeks.
Scott Paton
Great news, Scott.  (Scott is trying to set us up with an interview with Dean to talk about the new book ... so stay tuned!!!)  kk

Talk about a heart of gold ...
Back in the mid '80's Herb Alpert established The Herb Alpert Foundation in order to provide funding to charitable organizations and institutions that allow young adults to reach their full potential.
Well, on Thursday Morning it was announced that Alpert and his wife, Lani Hall, were issuing a grant of $10.1 million dollars (!) to Los Angeles City College to allow them to provide full scholarships to all the music majors at the school along with any needed instruments.  The gift allows all music majors to attend the school tuition-free.
Alpert, who says that he realizes that he has been blessed beyond his dreams, made the largest gift to an individual community college in the history of Southern California.  It is also the second largest gift ever donated in the history of the entire State of California.
Robert Schwartz, the Executive Director of the Los Angeles City College Foundation said "The vast majority of our students are from underserved communities and faced with enormous financial challenges as they strive to attain their academic and career goals.  This generous gift from The Herb Alpert Foundation allows these talented students to focus on their studies while pursuing their individual pathways towards successful careers in the music industry."  (Los Angeles City College provides post-secondary education to 40% of the area residents, who go on to higher education ... including three times as many Latino and four times as many African-American students than all University of California campuses combined.)
It is an incredible and unprecedented gift of music education.  We salute Herb Alpert for his generosity and willingness to share the love of his craft with others who feel the same way.  Wow!
In closing, Alpert said "LACC is a gem of an institution.  The biggest motivation was helping kids who don't have the financial energy to go to a major college.  At LACC, they've nurtured thousands of dedicated students every year.  My brother went there.  My ex-partner Lou Adler went there.  I've visited the school.  It's alive.  It's kickin'."

And how cool is this?!?!
Adam West, Burt Ward and Julie Newmar have reunited to voice their original Batman television characters in a brand new animated feature!
Catch the official trailer here:

Hi Kent,
Great reading on your (old) Mickey Thomas and Bobby Kimball reviews.  I must’ve missed them the first time around.  I loved all the various incarnations of Jefferson Airplane / Starship over the years.  I thought for sure that their hit-making days were over when Marty Balin left, but then I heard Mickey Thomas belting out “Jane” and all doubts were erased.  I loved the Mickey Thomas-led hits, such as “Find Your Way Back”, “Be My Lady”, “Winds Of Change” and “No Way Out”.  I even liked the eventually over-played biggies “We Built This City” and “Sara”.  My only disappointment came in 1989 when I saw Starship in concert.  Mickey’s voice was off that night and Grace was gone, so it just wasn’t a very good show.  As for Bobby Kimball, I always felt that he got a raw deal with Toto.  After the first album, I felt that they tried to downplay his role with the band.  Still, his vocals come shining through on the chorus of both “Rosanna” and “Africa”.  Even though he was supposedly gone by 1984, I swear I can him singing background vocals on the hit “Stranger In Town” (a very under-rated song, IMO).
Nice to see that Mike Nesmith is doing one more show with The Monkees.  I’m also glad that Micky and Peter are keeping the music alive, but it’s just not the same without Davy Jones.  The TV show debuted the year I was born, but I caught the reruns as a kid and eventually bought all the records.  I was in college during the 1986 revival and played them quite often on my campus radio show.
Keep up the great work!
Paul Haney
Mickey's got an incredible voice ... actually "Sara" is one of those that I've never gotten tired of hearing.  And Bobby Kimball's voice helped define Toto back in the early days.  It's sad that all these artists can't get along well enough to play in the same sandbox ... but fans now have the choice to see BOTH halves in concert and judge for themselves.  (Seeing Toto and Bobby Kimball perform within a reasonably short timeframe is a kick ... we did the same with Three Dog Night [or more accurately Two Dog Night] before Cory Wells died and then caught Chuck Negron's solo show a few months after.  Twice the music and still presented in a professional and respectful manner.  (kk)

>>>Thanks for sharing the song "Resurrection Shuffle".  I don't know why but I always thought these guys were black!!!  (Steve Sarley)
Tony Ashton  and Roy Dyke where part of the Remo Four who backed me for a while.  They were both very talented.  Roy once played drums for me when the Dakotas' drummer was sick.  Roy played the whole tour with me he is the only drummer who could play everything that was required without the aid of any special effects like we used on the record of Little Children.  He played the part perfectly and was one of the best drummers I have ever worked with.
Billy J. Kramer

Sad stories emerge from most of our early radio and TV entertainers. I will not stand on my soap box as I don’t know when to get off, BUT I do know that “Authorized by the Red Skelton Estate” appears on the dvd sets that we have for sale on our vintage dvd rack at the store. Are they organized, or released with any pattern? I do not know, but I have purchased them, and right now I have none in stock.
Shelley

Kent -
Below is a link to a Greek interview I just did that's getting great reviews.
My new "Tiki Lounge Live" CD will be out in November.  It features the last song recorded by Spirit drummer Ed Cassidy before he passed away.
All My Best,
Merrell
http://blues.gr/profiles/blogs/q-a-with-legendary-guitarist-merrell-fankhauser-has-led-one-of
Posted by Kent Kotal at 12:00 AM