What You Thought Of Billy J

We feel bad that we never got the chance to hook up with Billy while he was in Chicago for the Fest For Beatles Fans ... but he did send us a couple of clips now posted on his Facebook page to share with our readers ...

Thanks, Kent, it was great!  Thank you so much!
Sorry we didn't get the chance to meet up at the fest. I really had a great time and the fans were really great ... it really felt like a family get together.
We did an acoustic set Sunday afternoon.  Peter Asher hosted it and it was really great with Glen Bertinect on bass and Joey Molland, Mark Hudson and the legendary Albert Lee on acoustics.
We played skiffle and Buddy Holly, Eddie Cochran, Jerry Lee Lewis, The Everly Brothers and Cliff Richard's first hit "Move It".  We jammed out anything that came into our heads.  It was great fun there's a short piece of me on Facebook singing "Move It".  I think the fans really enjoyed it ... I know that I did!  I hadn't sang those songs since I was a kid when I started out in Liverpool!
Here's a little bit of the jam at the fest:
https://www.facebook.com/Billy-J-Kramer-OFFICIAL-207452142649815/#

You are doing a great job and wonderful service with Forgotten Hits and I appreciate it along with many other artists.  It's been a pleasure working on this with you ...
Hope to meet up one of these days.
Take care -
Billy

I'm really looking forward to the Billy J. Kramer articles.  You do so much good for the true classic rock arena with the utmost modesty and integrity.
Rock on, my brother!
Bob Rush

I'm diggin' the whole Billy J. Kramer interview.  What I like about your style of interviewing is that it's not just a bunch of hard line questions ... and more of a conversation.  While it seems very well thought out on your end, it also comes across as completely natural, just like two old friends talking.  You really do have a style of your own when it comes to this sort of thing.
Bart
I think I've become more relaxed doing this over the years ... yeah, I do my research and know what points I want to cover, but I also let the conversation go wherever it leads us ... which I think adds to that "natural feel" you're referring to.  I think it also works because I'm always, first and foremost, a real fan of this music ... and have dedicated the last seventeen years of my life to sharing this music with a wide audience of fans who feel the same way ... so the artist knows I'm genuine, if you know what I mean.  Billy J. was a great guy to talk to and I hope he stays in touch from time to time to comment on some of the other topics we cover in Forgotten Hits.  I feel really bad that we couldn't meet up while he was in town for the Fest For Beatles Fans ... would have loved to been able to thank him in person for his time.  (kk)

I have always loved the song “I’ll Be On My Way”. I have it on the BBC recordings (both obsolete cassette and cd) by The Beatles as well. Did I hear “it” at the end? I heard a beautiful harmony of notes, but could I tell you it was Paul McCartney? Or that it wasn’t Billy? Nope.
I have so enjoyed watching Billy at concerts lately and hope to see more. Finished his book, which he autographed for me at NY area Fest For Beatles Fans. I think I was first one to have him sign it that Saturday.  Oh, and they finally ran a scientific survey and found out that people who attend concerts on a regular basis lead happier lives.
YEAH BABY!
V.i.n.d.i.c.a.t.i.o.n.
Shelley “J” Sweet-Tufano
After Billy added the "J" to his name (at John Lennon's urging), it became sort of a running gag ... George Harrison started referring to himself as "George J. Harrison".  I think it still sounds cool!
I can't hear Paul McCartney's voice either ... and the note really isn't any higher than any others in the song so I'm kinda surprised by that.  Still pretty awesome, though, that The Beatles would attend Billy's recording sessions to see how he was doing their material.  (kk)

Kent,
I really enjoyed your first segment of the Billy J interview and look forward to the next two!
Here's a history lesson I wrote earlier this year on Billy J. ... "I'll Be On My Way" is indeed a keeper.  Great song that The Beatles (and manager Brian Epstein) gave to Billy J. Kramer along with "Do You Want to Know a Secret."  This two-sided winner reached #2 as Billy's first hit in UK in June, 1963.  Even tho Capitol would not take Beatles songs in '63, Capitol's subsidiary label Liberty DID release the same sides here in the US on 45 in JUNE, 1963 ALSO!!!  It was a flop and the fabs own version would be a hit within a year.  "I'll Be On My Way" would surface later in August 64 as the B side of the UK hit "From a Window," another fabs song and AGAIN as B side of 1965 chart hit "Trains Boats & Planes!" Even stranger, Liberty issued 1963 fab written singles of Billy's of "Bad to Me / I Call Your Name" (Sept), "I'll Keep You Satisfied" in November and AGAIN, in January, '64 after the invasion, "Bad To Me," backed with "Do You Want to Know a Secret," which was not a Beatles 45 here yet.  ALL of these failed these early times.   In March, "Little Children" failed as an A side and was pulled back from release.
FINALLY, a label switch to another Capitol subsid of Imperial Records came! In April, "Little Children" became a B side to "Bad to Me," probably because it was NOT a Beatles song.  Even that did not work.  However, stations jumped on the non-fabs side and "Children" became Billy's breakthrough hit in the USA.  As it was reaching #8, "Bad To Me" began making noise and charted at 71!  "Children" peaked at 7. BOTH sides were in the US top 12 (#9 and #12) on June 27.  Between the two sides, the single stayed on the Hot 100 for 22 consecutive weeks beginning when "Can't Buy Me Love" was in its 3rd week at #1 and ending when "A Hard Day's Night" was in its 2nd week at number one!!!
From there, the re-release of "I'll Keep You Satisfied" hit well and the last Lennon / McCartney song Billy recorded was "From a Window."
In the UK, most all of these songs were top 10 when released at the time the US first singles on Liberty were out.  Thus, "Bad To Me" was #1 in the summer of '63 and "Little Children" #1 in early 1964 on separate 45s.
SO, in just over a year, 7 Beatles tune 45s were released here in the US on 45 between June '63 and August '64!  Talk about pending Kramer-Mania!!!  Confused???
Attached is the WLS surveys for the two weeks Billy J's TSW was #1 in Chicago.  As you will see, the record reached #1 first with both sides and then just "Little Children."  Even tho you said you first heard the song on WLS in May, 64, you likely did, as "Little Children" first charted there in May, but reached #1 in June.
I've also attached a couple of snippets of both songs as played on the Big 89 that year of '64.  Altho I taped these off KOMA in OKC because WLS was harder to get at that time of year, my buddy and FH member, Ed Erxleben, managed to grab both with his mic and reel to reel recorder.  First hear both your and my Silver Dollar Survey host, Dex Card, playing "Little Children" at Christmas time, 1964, when, like every year, they would recap all the hits of the year for a week.  In 1965, they started putting out surveys to coincide showing the top hits of the year, but in 1964, they had not started doing that yet.  Nonetheless, this 45 would have likely been in the WLS top 20 of the year, had they done so.  Dex even mentions that you will remember this one!  He'll even say his famous moniker, "Dex Card, the crew cut fellow in the first row."
On the attached, Ron Riley plays the other side of the Two Sided Winner.  Riley will mention that it's a "Saturday night smoochin' date night in Chicago" and uses HIS moniker of "Ringo Ron Riley."  What memories!!!
Clark Besch 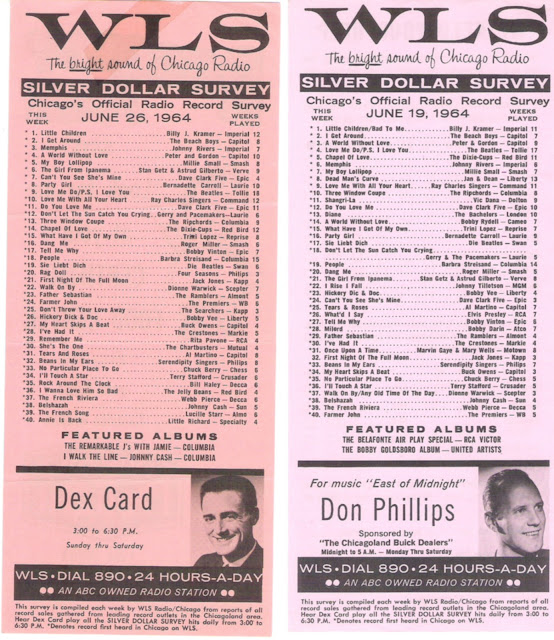 I am really enjoying this week's interview with Billy J. Kramer.
Phil Nee - WRCO
Thanks, Phil ... and it sounds like you'll be interviewing him next for your Sunday Night "Those Were The Days" radio program!  (kk)


And finally, Billy speaks out about the current state of the music business ...

I know people may be mad at me for saying this but I have to say it.
They should have found a way to protect the artists from having their material downloaded and I think the big guys like Billy Joel and Paul McCartney and Dave Grohl and Elton John and The Rolling Stones should have formed some kind of company to help the cause and keep great music alive.
I think Richard Branson should do it instead of making rockets that can give rich movie stars seven minutes of weightlessness.
I also think the fact that people can take an artist's photos and music and put it on youtube no matter how bad the quality is.  We don't have any protection.  Show Business is the least protected industry. I just think they may think it's cool but it's disrespectful.
Artists work so hard making good music and it should be heard at its best . If something isn't done soon, the youth of tomorrow won't have the great music of the past sixty years to inspire them.
I am sure I may be called a boring old fart but I really care about it.
Billy
Posted by Kent Kotal at 4:25 AM