The Beatles
My plan was to go see the Ron Howard - Beatles movie this weekend. When I did not see it listed as showing anywhere, I checked with my buddy that works for a Madison, Wisconsin newspaper.
He said that it only played once at one theater on Thursday night and they had an overflow crowd.
It was the only showing in Madison and it does not appear to be playing anywhere else this weekend within my reasonable driving distance.
While I will certainly watch it on the upcoming home video releases, I was hoping to see it on the big screen with big screen sound.  This is very disappointing.
Phil - WRCO
I know exactly what you mean ... we had the same situation here ... one theater, one night only and one showing only (at 7 pm on Thursday night).  We didn't order tickets in advance because I never know what time I'm going to get out of work.  (That night it was 7:30 so I would have missed it regardless.)
Now it's showing on Hulu but I want the big screen experience ... the booming sound, the whole nine yards.
I'm told it'll open in wide release in a couple of weeks ... and it's already scheduled to come out on DVD and BluRay in November ... but I want to see it the way it was MEANT to be seen.  Very disappointing.  (kk)

Kent,
Along with going public with the myth rather than the truth about who played them first, did Ron give us anything new in the movie? The general public seem to think this is a fun flick, but the real Beatles fans are saying it's nothing but the same stuff re-hashed and cleaned up a bit. What's your take?
David Lewis
As mentioned above, we didn't get to experience it in the theater for its one and only showing.  However, I have heard that complaint a lot ... TRUE Beatles fans have known about, seen and probably owned copies of most of this footage for decades now.  Still, I'm anxious to see it in its newly assembled form ... and I know I'll buy the DVD the day it comes out.
Several people commented about how Howard's film credits Washington, DC Disc Jockey Carroll James with being the first in America to play The Beatles on the air, a story we disproved nearly fifteen years ago right here in Forgotten Hits.  (Google "Who Played The First Beatles Record In America" and you'll find hundreds if not THOUSANDS of links citing our research.)  Yet Ron Howard apparently didn't do any fact-checking.  (You know what they say ... when the myth is more interesting and exciting than the truth, print the myth!)
I've got to tell you that it really pissed me off ... A - because MILLIONS of fans are going to come away from this film with the wrong information ... and B- because legendary Dick Biondi has once again been denied his rightful place in Beatleslore history.
In an article listing "Ten Things They Learned From The New Ron Howard Beatles Film", no less an authority than Rolling Stone worded it this way:
Eight Days a Week offers the chance to hear the very first time the Beatles were played over U.S. radio on December 17th, 1963, an event that was just as crucial as the band's American television debut on The Ed Sullivan Show a few months later. Amazingly, the event can be traced to the actions of one 15-year-old from Silver Springs, Maryland, named Marsha Albert. She is Patient X in the epidemic known as American Beatlemania.
These guys should know better!!!
Frannie posted something on Ron Howard's Facebook page (I won't deny that I encouraged her to do so) and our FH Buddy Rick O'Dell also put up a link on the Me-TV-FM website touting the Chicago connection.
The truth needs to be told.  (Scroll back on Howard's site to see it ... we encouraged him to explain that "new information has come his way" since the film was made and asked that he formally set the record straight, knowing full well they weren't going to edit the film at this stage of the game.)  Will he?  I doubt it ... but he's a pretty professional guy and I would think that he, too, would want the truth to be told.
The REAL story:
http://forgottenhits.com/who_played_the_very_first_beatles_record_in_america
And Me-TV-FM's headline ...
http://metv.fm/

The film hit another bump in the road earlier in the week when the family of promoter Sid Bernstein filed a suit to stop the film from opening in theaters claiming Howard didn't have the rights to the Shea Stadium concert footage from 1965.  (Bernstein was the promoter for that record-breaking concert, which also aired as a television special later ... and has been shown at Beatlefest get-togethers for the past four decades ... not to mention COUNTLESS midnight showings in movie theaters all over the country!)

Apparently it didn't hold things up for the premier ... but I'm wondering if some sort of licensing will now have to be paid to the family members who filed the suit. (Sid passed away a few years ago.)

Meanwhile, Paul and Ringo were both at the London premier (along with Ron Howard) and it sounds like it was a pretty teary, emotional event. 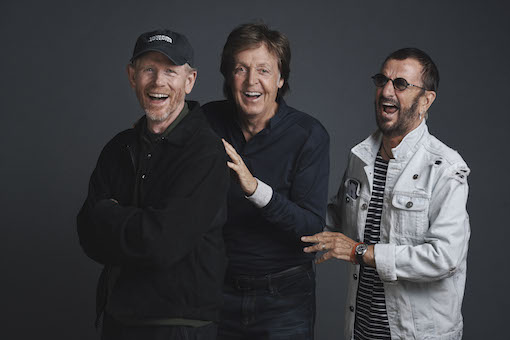 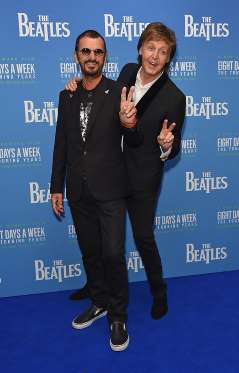 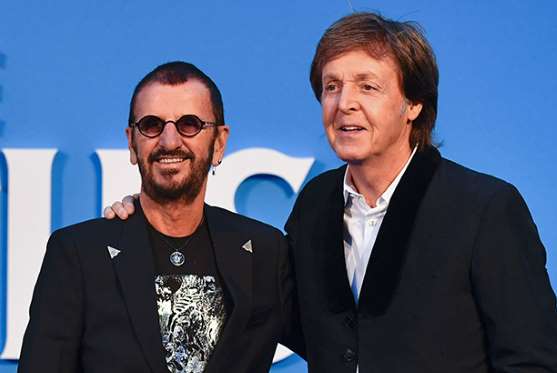 It's going to be hard for anybody who wasn't there at the time to be able to TRULY capture the electricity and impact that The Beatles had on our entire country when they first hit our shores back in 1964 ... their story has been so well documented over the year that every generation since has been exposed to some aspect of it.  But those of us who were there at the time know and remember.

It's funny ... I'm reading one of those New Musical Express / Melody Maker compilation magazine special editions right now devoted to The Beatles ... and in 1965 Paul McCartney was asked, when it's all over, YEARS from now, how would you like to be remembered ... and he responded "Fondly ... with a smile."  Here it is 50+ years later and their movie is making headline news playing to sell-out crowds all over the country.  Who would have EVER thought?!?!?  And to think that it all began with "Love Me Do"!!!  (kk)

Speaking of Me-TV-FM ...
We've been raving about this station for about eighteen months now ... and, as of last week, they've started streaming worldwide. (I had planned to do a full page piece on this last week but once again work and the real world got in the way!!! But we DID hear from several Forgotten Hits Readers who saw blurbs in the radio blogs and have already been checking it out.
I should point out that you are NOT getting a live feed of the radio station ... but rather a unique stream from the bulk of their playlist.  It is TOTALLY random, however, and no two streams are alike ... EACH person who signs on receives their own unique "mix" of music ... meaning it's the luck of the draw.  (We'll delve into this more deeply next week as time permits.)  Bottom line ... the stream doesn't offer the tender loving care afforded by Program Director Rick O'Dell in the way of sequencing ... it simply isn't possibly the way things are currently set up.  But you WILL get some idea as to the extensive playlist of "Wow Factor" songs this station serves up on a regular basis.
You can check out the stream here ... or via the Me-TV-FM link provided about in our Beatles coverage.  (kk)
http://metv.com/music

The Monkees
Michael Nesmith played what he says will be his last concert with The Monkees Friday Night (September 16th) at the Pantages Theater in Hollywood, California ... nearly exactly 50 years to the day of when The Monkees' television series premiered on NBC.
Full coverage is available here (along with several awesome live clips from the show) ...
https://www.yahoo.com/music/watch-mike-nesmith-play-his-final-concert-with-the-monkees-182136229.html

Only ever released on the SIDES compilation, Kent, and surely not “proper” by any means, especially these days, but in just seeing the SWEET 16 list today, it compelled me to mention the RJM Band (Raymond John Michael) track "Bobby And Georgia".  Intended to be harmless and silly, hopefully you will find it to be just that.  Just in case you do not have that CD in your massive NC6 / RJM collection, they asked me to review / comment on each of the songs so here attached you will also find the page where I covered Bobby & Georgia.
Have a super weekend.  Any chance we see you at Huntley on the 29th?
Ray
Crafted back in the days when one could insert one's own tongue firmly in one's own cheek and use plays on words that were a bit (more than a bit) offensive and be politically incorrect without fear of negative consequences.  Recognize the partially filled and tuned-to-the-music soda bottles during the instrumental bridge?  Both RJM and NC6 had a wacky sense of humor and I think this one optimizes that weirdness.

Work schedule being what it is of late (see above ... 12-16 hour days have become the norm again ... I'm getting WAY too old for this shit!!!), hitting your show on a weeknight is going to be tough to do ... especially since Huntley's another one hour drive once I get home! ... but good luck to all and put on a great show!  (kk)
http://www.sccah.com/events/EventDetails.aspx?id=845274&group=+http%3A%2F%2Fl.facebook.com%2Fl%2FzAQEdSlVsAQHp_8XXyuwpsqij-u6VoKveAbqo6OsodMATew%2Fwww.newcolonysix.com

Kent,
Thanks for the Bobby focus today.
Whenever I hear someone say Bobby, I think of my parents, who never stopped calling me Bobby, even when they were in their 80’s and I in my 50’s.
Bob “Bobby” Verbos
New Berlin, WI.

Hey Kent,
Long time between contacts!
It sure was neat to start reading FH this morning and seeing Citizen Bill mentioned!  Brought back good memories.
I’m now on two stations, the one in Alabama and one in Tennessee outside Nashville.  Maybe you could say I’m finally syndicated LOL.
Incredibly I’m approaching my 750th show in a few weeks and will celebrate my 15th anniversary on air in February of 2017.
BTW our new listen live on the Alabama station is www.fun927.net and in Tennessee it www.funradiotn.com  Thanks Kent, and keep up the great work.
Have a great weekend!
Citizen Bill Rutherford
Good to hear from you, too, Bill!  I remember the "Bobbys" show you did several years ago and it just lent itself so well to our new Sweet 16 format! (kk)

Remember Then ...
Here's a photo from way back when featuring Scott Shannon and his self-make "Citizen Bill Fan" sign!  (lol) 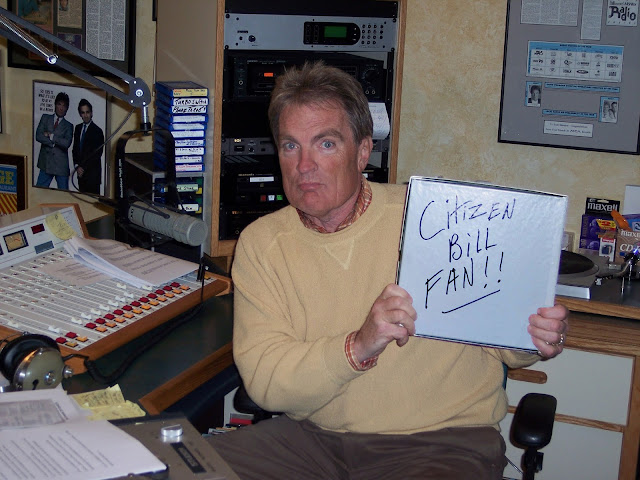 Kent,
Enjoyed today's FH. Before I scrolled down completely and surveyed the "BOBBY" songs you posted, I thought of 2 or 3 and wondered if they had made your list.
Here goes:
Frankie Avalon's BOBBY SOX TO STOCKINGS,
Darlene Love's WAIT TIL MY BOBBY GETS HOME,
Neil Scott's BOBBY,
and last but certainly not least,
BOB B SOXX & the Blue Jeans ZIP-A-DEE DOO-DAH.
Larry Neal

One more for the Bobbys:
Darlene Love's "Wait Til My Bobby Gets Home."
Nice upbeat girl-group sound ... and memorable because it was big in the summer of '63, when I fist discovered pop music.
Jeff Duntemann

Hi Kent -
Got hooked on this car website blog this past week. (I find myself much more interested in older cars since I bought a 72 Gremlin X three years ago. Love it!).

Anyway, one blog post was all about your buddy Jim Peterik's classic car collection, as well as his guitar collection. Thought you and FH readers might enjoy it.
http://blog.consumerguide.com/consumer-guide-visits-the-car-and-guitar-collections-of-rock-n-roller-jim-peterik/
- Mike Lane
Minneapolis (musician and Gremlin X owner)
Cars and Guitars ... sounds like he's got a pretty good collection of both!  (lol)  Some AMAZING shots here.  Thanks, Mike!  (kk)

Clip of the Week
Forgotten Hits Reader picks up the award again this week for this live clip of The Elegants performing their #1 Hit "Little Star" ...
Kent ...
Truth in advertising from Vito Picone and the Elegants.
https://www.youtube.com/watch?v=YAvS5syYGII
Frank B.
Posted by Kent Kotal at 12:08 AM