Daryl Hall has opened an intimate restaurant and live performance club called DARYL’S HOUSE in Pawling, NY. It is a mere hour and a half from me EXCEPT that it took me two hours on Thursday night due to traffic. I am, however, VERY glad I got there.

I won tickets from Ken Michaels’ show EVERY LITTLE THING, which is a syndicated Beatles radio show now broadcast on WNHU/88.7 out of West Haven, CT. The performing act is one of my favorite British Invasion acts: Chad and Jeremy.

My friend and I have a table by the side of the stage in front of the sound booth and with a clear view of the performers. Daryl’s is a perfect venue for me to enjoy, and relish such beautiful songs in perfect two-part harmony.

Overheard:  Chad and Jeremy are one of those teams that could be apart for years and yet when they get together blend perfectly without rehearsal.

They begin at the end, with their last hit:

1. I Will Know That You Are She
2. Willow Weep For Me
3. Avocado:  A love song to a fruit revealing sadistic tendencies such as beating and whipping and chopping (Good song)
4. The English folk song: The Water is Wide, which at first I heard as The Water is Wine. Hey, it made sense for the first line, but then I realized my error.
5. Take Out Some Insurance
6. Before and After
7. For Awhile There
8. I Want To Be In A “B” Movie
9. Doghouse Blues
10. Everyone’s Gone to the Moon
11. Yesterday’s Gone

Overheard:  Zanzibar Sunset is my new theme song. I think I will live by it.

Overheard:  I could listen to Summer Song every day. It is so simple, yet so complete.

For me, Distant Shores brings in the romance while September In The Rain evokes childhood memories from The American Songbook. I had a dance routine to Yesterday’s Gone … a jive dance. It was very quick, lively and physically draining, BUT that song kept my partner and me literally on our toes and smiling for the full 2:29! I relished this “reach out and touch” opportunity to hear those melodies and harmonies of two truly blended voices. History has shown that music connects performers in a way that pushes out personal issues, if only for a limited time, and allows magic to be released.

The last time I saw Chad and Jeremy was at The Fest For Beatles Fans with Peter Asher. When I was told I had tickets for Daryl’s, my reply was, “Yes! If I am too tired Friday morning for school, I will call out.” I was tired! But it was the best kind of tired, and I went into school and that night into the store, only to get up yesterday and go back to the store.

Overheard:  We need to hang onto these 60s artists and see them whenever we can.

In an act of total selflessness … I volunteer! I will hang onto them and see them as often as I can for as long as I can. Chad and Jeremy, your vocals and musical talents are strong and your audiences love you. Thank you for that moment in time, Thursday night. I bought the Reflection cd, which is taken from live concerts, and have been listening to it in the car these past three days and nights. It is signed per Jeremy’s solution, “The gold works well on this one, the silver is useless.” So it comes inside each night.

Texted from my son:  They are two of the coolest, down to earth people I’ve ever met. Oh, and by the way, they also happen to be great professional musicians. OMG SO MANY AMAZING SONGS! 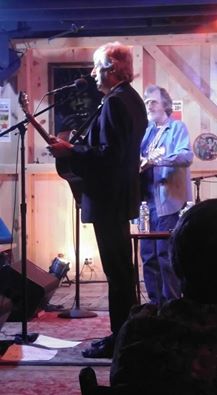 Chad and Jeremy are appearing here tomorrow night at SPACE in Evanston.  Looks like the show is a complete sell out (other than perhaps some "standing room only" seats) but I sure would love to see them.  (SPACE is a small venue ... but also where I saw Al Kooper a few years ago.)

Only a few more dates remain on this, their final tour together ...