Happy Belated Birthday to the legendary Paul Simon, who turned 75 years old yesterday, the 13th, (when we were unable to publish)!  kk

Hey Kent,
While we're on the subject of The Stylistics, their song "Rockin' Roll Baby" was written about composer Thom Bell's young son. The picture on the album cover is not his son, but some cute kid, found by the photographer, as a model for the shoot. Do you or anyone out there know who he is and what he's doing now? Not even Russell Thompkins, Jr. knows and says he's never met him.
- John LaPuzza 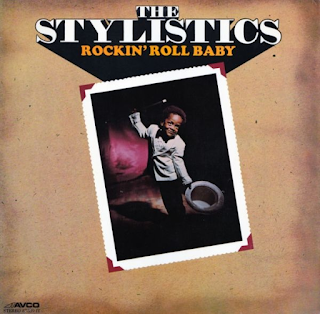 OK, folks, here's our latest Forgotten Hits scavenger hunt ... anybody able to come up with a definitive answer on this one???  (kk)

Like you, I don't consider myself to be much of a fan of The New Kids On The Block - that whole era of pop music was outside the scope of what I was focusing on at the time - but I will agree that a surprise double bill featuring both The Stylistics and The New Kids On The Block is a pretty big "get".  Did they do any of their own songs?  Or only the "duet" with The Stylistics?
Alan
As far as I know, they just did the one big number together, "You Make Me Feel Brand New".  (We left before the encore so I don't know if they came back out or not ... anybody able to chime in on this one?)  Even as a non-fan spectator, I've got to tell you that it was quite an electric moment ... these guys were HUGE, even if they were outside both our radar at the time.  (kk)

Here's a great excerpt from Brian Wilson's new book, available now, in which he talks about his '60's peers, The Beatles and The Rolling Stones.  (Thanks, Frank B, for sending this in!)  This is on my list of 27 books I MUST read before the end of the year ... (Mike Love's version is another) but is clearly not written in Brian's own words ... (have you EVER heard him speak like this???)  Somebody else made a comment that it seems like they were running out to the book store to buy Brian's new biography twenty years ago ... and the fact is, they WERE!!!  (kk)
http://wcbsfm.cbslocal.com/2016/10/11/brian-wilson-beatles-rolling-stones/?e=5Nf7hO17AO0k&utm_source=email&utm_medium=email&utm_content=11431&utm_campaign=daily-news-headlines-recommended--50

Hate to hear of the passing of Don Ciccone of the Critters on October 8th - exactly 50 years to the day since their biggest hit, "Mr. Dieingly Sad" peaked at #17 on the Billboard Hot 100. And I'd just featured that record on the 8th. Wow.
- Larry Cave
50yearsagoonthehot100.blogspot.com

Hi Kent,
So  Sorry to hear of the passing of Don Ciccone of the Critters. Mr. Dieingly Sad was one of my favorite love ballads. What a beautiful arrangement of harmony.
Thank you for the information of the 2017 Happy Together Tour. I hope to go to this one.  (Must see the Cowsills!!)
Looking forward to their upcoming 2017 schedule.
Keep Rocking!
Carolyn
Kent;
Hope you're rockin'!
You know I love people who truly devote themselves to their respective crafts whether it's sports, music, politics or hour painting.
With that thought in mind, a tip of the cap - big time - to Jimmy Peterik, long time front man for the Ides, for his new CD, "The Songs."
Jim's voice resonates with power, soul and passion. The first cut - no surprise! - is "Vehicle." However, this is not your great grandfather's power rocker. It's an urban blue slice of musical mirth. This may sound like a reach, but the first time I heard the cut I thought to myself, "B.B. King wouldn't have done this song any better - with or without Lucille."
The tearful solo bridge only adds to what is really a very raw, stripped down effort.
The songs is beyond heartfelt. It's credibility can not be challenged.
My congrats to Jim. He has stood his ground. He has earned the right to sing his songs however he damn well pleases and on "The Songs", Jim opens up new and welcome turf.
James, you belong in the R and R hall of Fame
Chet Coppock

Wow!!!  Thanks Chet.
And thanks Kent for passing this along! You are very gracious my good friend!  So glad you are enjoying my new cd. Nice running into you at the station.
Blessings.
Jimbo
Keep Rocking!

I texted our FH Buddy John Madara last week to congratulation him after hearing his song, "You Don't Own Me" being used in a television car commercial.  It's one of my all-time favorites ... but I'll tell you what ... I'll bet you I've heard it at LEAST 40 times since then!!!  (You can check out the main clip below)  WTG, John ... just one more way to keep this great music alive.  (Now just don't make me sick of one of my all-time favorites!!! lol)  kk

With all of the talk about That Thing You Do and other rock and roll movies that are being mentioned of late, perhaps it would be cool to create a Forgotten Hits Top 50 or 100 List of great movies about Rock & Roll.I would also like to add to the list of must see movies about the rock and roll genre "Telling Lies In America", which is a movie about the radio payola scandals.
Tim K.
I'll bet our readers could come up with quite a list.  I haven't seen "Telling Lies In America", but would recommend "Wages of $pin" if you haven't already seen it ... kinda shows you how some hits were "manufactured" back in the day.  (kk)

Henrick Makhtaryan just discovered our site ... he's the guy who runs The Main Event Specials website, featuring special ticket offers for concerts and musicals all over the country.  (In fact, he's promoting several showings in multiple cities of "Motown: The Musical", which is supposed to be a GREAT stage presentation.  Sadly, we missed it when it played here in Chicago recently ... but check out the calendar links below to see if the show is coming anywhere near you.)  LOTS of great music ... and it's been playing to rave reviews! (kk)
https://maineventspecials.com/motown-the-musical-tickets-reviews/
More great shows and ticket offers:
https://maineventspecials.com


FH Reader Frank B sent us these clips of Paul McCartney and Neil Young performing together during last week's "Desert Trip" / "Oldchella" concert series ... further evidence that it really is well past the time for McCartney to hang it up.  Ever the perfectionist, I can't believe even HE believes this is the way he wants to sound or be remembered by his fans.
He's been touring virtually non-stop since 1972 ... and the last 10-12 years have been painful at best ... and really pretty sad to watch, especially for a lifetime fan such as I.  Yet he continues to sell out shows to MASSIVE crowds around the globe, most coming just for the experience of seeing him because of who he is and what he represents ... and to hear some of his incredible library of material.  (In fact these clips offer up a few tracks not normally done by McCartney ... but give a listen to "Why Don't We Do It In The Road" and you'll see exactly what I'm talking about ... the vocal chops just aren't there anymore.  It hurts me to say it because I love the guy ... but it's like the heavyweight fighter who just won't retire and goes out on his back because he just had to feel it one more time.  Sad.  (kk)
http://consequenceofsound.net/2016/10/paul-mccartney-and-neil-young-join-forces-at-desert-trip-watch/


Got this clip from Tommy Roe ... funny stuff!


There is play time, sad time, time in and time out, some other time and time wasted, but the fun time is right now remembering old times!
Clark Weber
WLS of Old!
Posted by Kent Kotal at 6:06 AM