Kent ...
You won't believe this one.
Is WCBS-FM Stealing My Ideas???

I woke up this morning and turned on my clock radio.  I hear "Kokomo" by The Beach Boys -- followed by "Little Saint Nick." They're calling it "Christmas Bonus."
What's next ? Maybe I'll hear Elvis and The Royal Philharmonic on WCBS-FM.
Then I'll know that they are reading "Forgotten Hits" and stealing my ideas.
That's okay with me. They can use all my ideas if they want to.
Maybe I could get them to bring back "The Doo-Wop Shop."   Wishful thinking.
Frank B.
One thing you'll learn very quickly about radio is that there are no "new ideas" ... everybody just cannibalizes everybody else until the end result is barely a shred of the original concept ... which was probably a GREAT idea at some point until everybody else whittled away at it to make it fit THEIR format. Such is life.  (kk)

On February 20, 1962, John Glenn piloted the "Friendship 7" spacecraft on the first manned orbital mission of the United States completing a successful three-orbit mission around the earth.
It inspired me to go deep into my personal archives ~~~

to come up with this.

Do you remember this obscure, jazzy tribute by William Allen and His Orchestra that soon followed that historical flight? 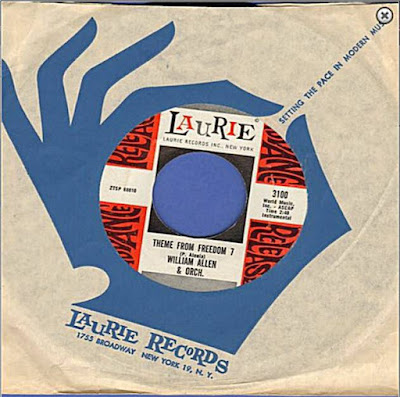 I remember hearing it on the radio a couple of times, and rushing down to my local record store to get a copy.  I have no idea if it even charted.
Anyway, it sounded like ~~~ the attached audio!


By the way, do you know who this Allen guy was? I couldn't find any information on him.


I can't find a record of this charting anywhere ... where'd you grow up?!?!  Nor have I ever heard it (or OF it) before ... evidently just a quick cash-in on Glenn's flight.  Anybody else know anything about it?


I also found this on Wikipedia ...
In June 1961, Laurie Records issued a 45 rpm single featuring William Allen and Orchestra entitled "Space Flight Freedom 7"  It consisted of recreations of the tower to astronaut communications spoken over an instrumental backing. The Mercury-Redstone 3 mission was dramatized in the HBO miniseries From the Earth to the Moon episode "Can We Do This?" (starring Ted Levine as Alan Shepard), as well as in Tom Wolfe's book The Right Stuff, and Philip Kaufman's movie The Right Stuff based on the book. (In Kaufman's film, Scott Glenn plays Shepard.)


Speaking of John Glenn, I heard Scott Shannon do a very nice tribute to him on The True Oldies Channel on Friday.  Glenn lived an INCREDIBLE life ... and hitting 95 is pretty damn good these days.  He referred to him as a "true hero", a word thrown around far too easily these days.  (Another report I read on line referred to Glenn as perhaps the last great American hero ... maybe Joey Scarbury should write a song about him!)  Seriously, though, what an incredible career.  (kk)


The only astronaut record I've got in my collection (other than "Baja" BY The Astronauts) is THIS gem from 1961 ...


Today a song out of the clear blue sky came to my mind which would have fitted right in with your KISS songs a few days ago. Now Kent, this is a song that NOT IN A MILLION YEARS (as singer Linda Scott would have said), would you have thought of. How about Paul Anka's 1962 song ESO BESO (THAT KISS). Kent, admit it, this is one you wouldn't have thought of. Have a great weekend.


Actually, I DID think of this song ... but figured nobody would get it!!!  So I took it off the list. (I kinda like this tune!  In fact, I think Paul Anka performed it when we saw him at The Arcada Theatre a few months back.)
Another was Paul McCartney's "Only One More Kiss" from his "Red Rose Speedway" album, a track they used to play on WBBM-FM here quite a bit back in 1973.  (I'll bet even Paul has forgotten about this one!  lol)  kk

Kent,
You are my man! To be honest with you, I thought in the very back of my mind you would have thought of it, but wasn't 100% sure. Again, have a great weekend.
Larry

FH Reader Tom Cuddy sent me a link to an article he found in the Beaver County Times in Pennsylvania ... but because the article was over 24 hours old, they wouldn't let me link to it (or, to do so ... and to enable you guys to read it ... you would have each had to subscribe to their online newspaper service or pay $1.99 to view!!!)
Thankfully, the author, Scott Tady, sent me a copy of his piece so all our oldies fans (and Lou Christie fans) could check it out.  So THANK YOU, Scott ... and Lou ... for helping to allow us to keep this great music alive!  (kk)

Hi Kent,
I've sent your request to our circulation folks to see what they say. As a backup I emailed you the words below.
I'm no fan of our paywall, believe me, though there's an interesting irony here as you'll read in my Lou interview.
Lou makes the point of today's musicians celebrating how many free listens their songs get. Lou says "They BOUGHT our records."
Newspapers and musical artists are in the same boat with a public that expects the product to be give away free!

I explained to Scott that the downside to an article like this (with a "pay per view" caveat) is that it only sees a limited audience ... unless you're a "local" in Beaver Valley who is already planning on going to the concert, the chain only reaches so far. (Hopefully you'll entice a few more readers to buy tickets along the way ... which is the whole purpose of any advance promotion ... but after that, it has served its purpose and is pretty much forgotten.)
Now it just may so happen that Lou Christie may choose to also post this on HIS site ... which again will reach every Lou Christie fan who happens to visit ... but there are thousands ... if not millions of OTHER oldies fans out there who love Lou Christie's music ... and oldies music ... but just didn't happen to think of him today ... that will still miss this piece and that's a shame.
That's the really nice thing about our website ... it has literally thousands of readers around the globe, who absolutey LIVE for this kind of thing ... so now your work is reaching a FAR greater audience through our site ... where it will REMAIN posted from this point forward.
So seriously, Scott, thanks again for allowing us to share with the folks to whom it'll mean the most.  (kk) 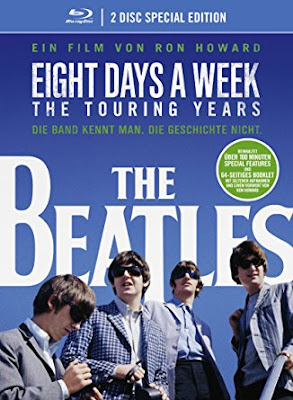 Sounds like there's a bad batch of DVD's floating around out there for the new Ron Howard / Beatles film "Eight Days A Week". (Yep, guess who got one!)
I ordered the deluxe edition with both the full theatrical movie along with 100+ minutes of bonus footage ... but all that came inside the case was the bonus disk.  Apparently Amazon has been issuing refunds for weeks now due to the packaging defect.
Problem is now all I've got is the bonus disk - and I'm reluctant to go out and buy another copy for fear of what may (or may not!) really be inside the package.  (Amazon admitted that they couldn't fulfill a reorder at this time because, by all appearances, the box is the real deal ... you don't know what's REALLY inside until you bring it home and open it up yourself!  Anybody else had any issues with this hot new release?  (kk)