Living In The Moment with Carl Giammarese 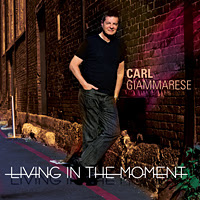 For the past several weeks I’ve been listening to the new Carl Giammarese solo album, “Living In The Moment”.  (In fact, I’ve probably listened at least a dozen times by now!)

I find it to be an extremely enjoyable experience as Carl takes on ten brand new, self-penned tracks encompassing any variety of different styles yet flowing them seamlessly throughout the new LP.

I had the chance to sit down with Carl and talk the day before Thanksgiving and we went through the album track by track, as well as covering a few other topics along the way.

Today and tomorrow I will share those conversations with you … along with some prime Giammarese tracks.

Living In The Moment

Whisper And A Sigh:
This was the first song I wrote for the album.
It’s all about having intense love for someone.
With A Whisper and A sigh, that’s how I, think of you.
It’s so hard to reason why, when love runs high, what can I do.
I can’t help but fantasize, the way I do over you
There ain’t no way I can disguise, the feelings I, I know are true
This is a VERY strong opening track – and it perfectly sets the tone for the album.  Without question, one of my favorites on the new LP.  (kk)

We All Need Someone To Love
The title says it all … “we all need someone to love”
Every night I think about you since you’ve been gone.
You were the one that got away.
Try to live without you it’s hard to go on, can we go back to yesterday.
This one (and track four, “What A Time We Had”) fall into that very successful, middle-of-the-road, bluesy groove that Eric Clapton has adopted over the past several years … if because of today’s strict and stringent airplay policies Carl Giammarese can’t get airplay, getting Clapton to cover one of these songs just might put him back on the radio.  (Probably this one more so than the other, since the other track is so personal)  kk

You Make Me A Better Me
To all those who have a significant other supporting you through life’s challenges. I have been very fortunate to have that person.
There ain’t a place I’d rather be, there’s not a face I’d rather see
You are the one that I need, the one for me
You always seem to understand, always seem to have a plan
You always show me that I can when I don’t believe
And when the stars come out at night, you are there to hold me tight. And like the leaves upon a tree, you make me a better me.

What A Time We Had
To my brother Buckinghams in those late great 60’s.
Oh what a time we had together, we were brothers in every way.
We knew it wouldn’t last forever, it doesn’t matter, it’s okay.
Oh what a time we had together, those years gone by, went by so fast
It was our time to be together, somehow the future became the past
One of two tracks on the CD written for founding Buckinghams member (and drummer) Jon Jon Poulos, who passed away in 1980, this one is kind of Carl’s “open letter” to ALL of his Buckinghams bandmates from back in the day.  Without question, they were in a whirlwind as things were happening so fast around them.  They were, after all, just a bunch of kids from Chicago who were suddenly thrown in front of the whole world – whatever they experienced back then, they experienced together … a “band of brothers” who share some very special memories that the rest of the outside world never truly got a chance to see.  Sure, we know the story … and we’ve heard the hits … but unless you experienced it first hand, you really have NO idea just what these guys went through on their way to the top.  (kk)

One More Time
It’s all about lost love, I had a few friends in mind as I wrote this, and they will know who they are.
She was that woman to you, that comes but once in your life, wrong or right, what you would give to have her, one more time.

Hold On To Your Dreams
I wrote this at a low point in my life but these words helped me get through it.
It’s all about having faith and fulfilling your dreams. With all the ups and downs in life, just believe, and in the end it will work out and be alright.
Hold on to your dreams and never let go,
God only knows, what the future brings, so never let go of your dreams
As time goes by, you know there will be tears that cloud your eyes
But everything will be alright, yes I know its gonna be alright
Deep into the night, when you’re feeling low down, they’ll come a light
Shining down on you, have faith and it will carry you through
Another very bluesy track, as is the next one, “I Thought I Knew You” … these tracks show another side of Carl that doesn’t have the opportunity to come out during the typical Buckinghams show.  (kk)

I Thought I Knew You


What can I say … anyone who’s had someone walk out or cheat on them can relate to this.
It’s an old topic written about more than any other subject in song.
Now you say you’re leaving, and never gave a reason,
Girl you turned my life upside down -
There ain’t no way of healing this broken hearted feeling,
Just tell me how to turn it around
I thought I knew you, but love can be so blind
Oh its so true, it happens all the time.

Oh Lord (Make Me More Like You)
I wrote this song right after my father passed away in 2002. I sat late one night still feeling his presence which inspired me to write it. I am honored that a few Christian Music artists have record “Oh Lord” and made it their own.
You are the answer, you are the light
The only reason I get through the night
You’re my redeemer, please help me to see
Show me the way, and let me believe
Help me to see you
Save me cause I’m a fool
Could I ever be what you want me to.
Oh Lord make me more like you
And now, with this cut, a very successful shift to gospel – again, not at all what we typically expect from him – but very well done.  Another extremely strong track from the new album.  (kk)

I’ll Remember You
Jon Poulos was like a brother to me. He was the original drummer and a founding member and leader of The Buckinghams. When he passed away in 1980 it hit me hard.  These lyrics reflect my feelings and how I remember him. I’ll remember you, will you remember me
I guess it’s just the way it had to be
When the days turned to years, you should never fear
That you’ll become a distant memory
I can’t believe you’ll never have tomorrow
You’ll always be a part of yesterday
And when I get this feeling of sorrow
I wonder what you would have been today
Another moving tribute to Jon Jon – I guess the older we get, the more we tend to reflect back on all the things that got us here – to where we are today – Carl seems to be particularly appreciative of the long, successful ride The Buckinghams has provided for him.  Another moving track.  (kk)

Living In The Moment
I find myself reflecting on the past quite a bit, I guess it can’t be helped to some extent when you reach a certain age.
(See, didn’t I tell ya?!?!? – kk)
I am also guilty of thinking about the future too much and my own mortality.
I realize that it’s all about “Living In The Moment” … and that’s all I’m trying to say in these lyrics. Hopefully I can live by them.
Our time is here right now, I’ve got to get past yesterday somehow
The future is brighter, everything becomes lighter if you
Start living in the moment
The days will turn to years, and only add to all of our fears
I’ll live in the hour, smell all the flowers, it’s clear
Start living in the moment.

This is the title track and another extremely strong track on the album – I think it’s kinda cool how it turns into a country hoedown … reminiscent of what Jim Peterik did on his last album, “The Songs”, where he re-imagined some of his best known work.  I cannot help but wonder if this was an influence of sorts.

Those are my first reactions to the new CD – again, a very enjoyable listen – and available now at www.carlgiammarese.com (just in time for Christmas gift-giving!!!)

My EXCLUSIVE interview with Carl Giammarese in conjunction with the new LP … and just some “life in general” stuff, too.  Enjoy!