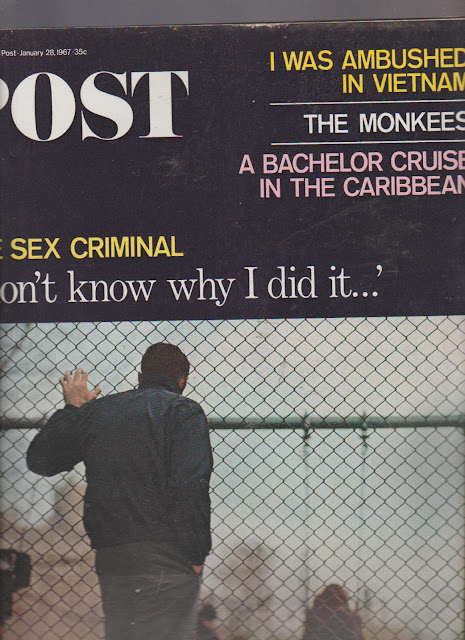 The Saturday Evening Post publishes an in-depth expose on The Monkees.

Michael Nesmith seizes the opportunity to expose what is really going on behind the scenes:

"The music had nothing to do with us.  It was totally dishonest.  Do you know how debilitating it is to sit up and have to duplicate somebody else's records?  That's really what we're doing.  The music happened in spite of The Monkees.  I don't care if we never sell another record.  Maybe we're manufactured … tell the world we're synthetic because, damn it, we are.  Tell them The Monkees are wholly man-made overnight … that millions of dollars has been poured into this thing.  Tell the world we don't record our own music … but that's what they see on television."

Pulling the rug out from under themselves this early on in their career could have been career suicide.  The press jumped all over this story and The Monkees quickly became known as "The Pre-Fab Four".  But the fans didn't mind … they loved the music … they loved the television show … and they loved The Monkees … and the group would continue to ride the wave of unparalleled popularity throughout the rest of the year.

Meanwhile, BBC Radio in Britain airs a ten minute interview with the group on their "Where It's At" radio programme.

There is a song that's a REAL favorite of mine that never charted nationally, but which was a # 1 hit on KONO in January / February of 1967 in San Antonio.
It's called "Bittersweet" by the Robbs.
Brad

The Robbs have become known as "The Kings Of Bubbling Under" ...
We have covered their success (or lack there of) several times before in Forgotten Hits.
It just didn't make sense.  They were a bunch of good looking guys who regularly appeared on the cover of all the teen magazines ...
They were hand-picked by Dick Clark to be one of the "regulars" featured on his after school music program "Where The Action Is" ...
And yet despite all this hype behind them, they STILL couldn't score a hit record.
(Here in Chicago "Race With The Wind" broke The Top 20 on WLS ... but they should have enjoyed a better fate, being from the Midwest and all!)
A bit of research shows that "Bittersweet" (a record that didn't even bubble under in Billboard) was a regional hit not only in San Antonio (where it went to #1 on KONO) but also in Milwaukee (where it was a #1 Record on WOKY and #3 on competing WRIT) and Top Ten in both Louisville, KY and Honolulu, HI!!!  (Go figure!)  This song was written by Sloan and Barri during their hot streak ... and it should have been a hit.
Another track that experienced a similar fate was their follow up single "Rapid Transit" ... big in several local markets (but never enough of them at the same time to make a dent on the charts.)
You can find one of our Robbs series here ...

http://forgottenhits60s.blogspot.com/2010/05/wrapping-things-up-in-wisconsin-with.html
And listen to the track here: