Peter and Gordon split up.  Peter Asher will go on to produce artists like James Taylor and Linda Ronstadt, winning Rolling Stone Magazine's "Producer Of The Year" honor twice.  Gordon Waller will do some acting, including a lengthy run as Pharaoh in "Joseph And His Amazing Techicolor Dreamcoat".  Decades later, in 2005, the duo will reunite for a series of concerts and Beatlefest appearances. (Gordon died in 2009 but Peter, performing with Chad and Jeremy, has been part of several recent British Invasion Reunion Tours) 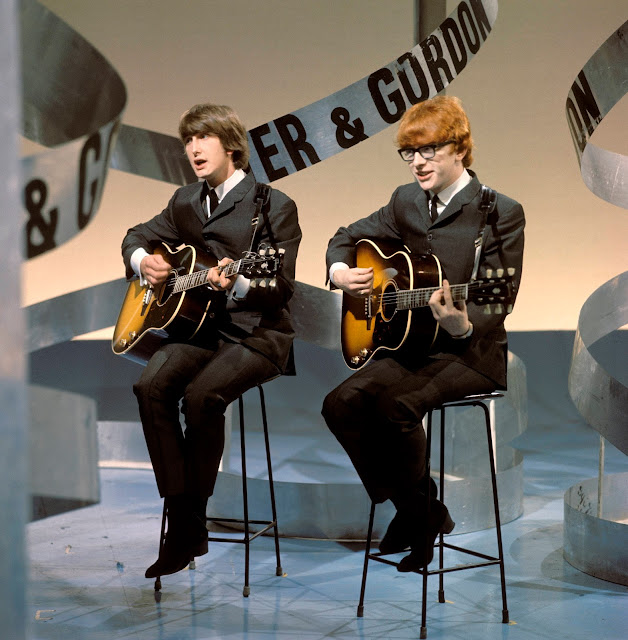 The Beatles begin recording "Good Morning Good Morning" for their upcoming "Sgt. Pepper's Lonely Hearts Club Band" album.  John Lennon (who wrote the song) said he was inspired by a corn flakes commercial he saw on tv one morning.  It was his idea to add the animal sounds at the end of the record … and he instructed Engineer Geoff Emerick to arrange the animal noises so that each animal heard was capable of devouring (or at least frightening) the animal preceding it.  One cool effect that just happened to work was the chicken squeal at the end of the record leading right into the opening note of the title theme's reprise.  Monkee Micky Dolenz was present for this session.
Later that evening, Micky and Paul McCartney will meet Mike and Phyllis Nesmith at The Bag O' Nails club in London.

Elvis buys Twinkletown Farm in Mississippi and renames it The Circle G (for Graceland) Ranch.  For the past several weeks he has been on a horse-buying spree, purchasing over a dozen horses for himself and his ever-present posse.  Within the next three weeks he will purchase more than two dozen pick-up trucks and other vehicles for use on this new ranch.

The Blues Magoos are back on "Where The Action Is", performing "We Ain't Got Nothin' Yet", along with Jimmy Castor, who does his new hit "Hey Leroy, Your Mama's Calling You".
Posted by Kent Kotal at 6:00 AM