A Few Of Your Mid-Week Comments

They're launching The Beach Boys Channel tomorrow (May 24th) … and it'll run All Summer Long (pun intended) … and check this out … you can even call in your requests by dialing  833-FUNFUNFUN!

More info via the link below:

If you're a Monkees fan, there's a great interview in Rolling Stone about the upcoming Mike and Micky Tour.

It hits Chicago on June 14th … and it looks like there are plenty of great seat still available:  https://www.ticketfly.com/purchase/selectSeats?id=1646711

Speaking of exciting new tours, pairing together former bandmates from the ‘60’s, FH Reader Ken Voss let us know about a new show that reunites two founding members of The Byrds!!!

Roger McGuinn and Chris Hillman are teaming up with Marty Stuart for a series of shows under the heading of “Sweethearts Of The Rodeo,” during which they’ll perform the iconic Byrds’ album release in its entirety.

However, I've got to admit that I'm a little bit baffled by this one ...

Although we were able to view all of the promotional material on Sunday Night when we first received it, every bit of it has been removed today and all of the links have been cleared … so I wonder if this was either a hoax or information that was originally released sooner than it was supposed to be … or the whole tour is off!!!

If anybody can shed any light on this, we’d love to hear it, as I think a number of Forgotten Hits Readers would LOVE to check out this show.  (Man, if only Wild Bill Cody was still with us … he would have killed to catch this one!)  kk

One show you CAN see, however, is Felix Cavaliere at The Memorial Opera House in Valparaiso, Indiana, on June 9th … and it’s all for a good cause, too!  Check out a great performer and help raise money for Hospice, too.

Full details in the poster below … 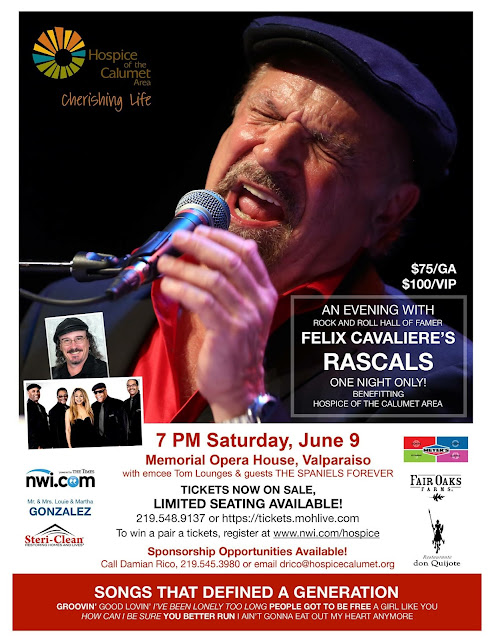 Since you did that fabulous Bobby piece some time back, I thought you should see this. I hope it's good. Sure be fun to hear.
Still in love with FH.
Bill
https://theseconddisc.com/2018/05/breaking-second-disc-records-real-gone-music-unearth-never-before-heard-bobby-darin-on-go-ahead-and-back-up-the-lost-motown-masters/

“Ruby Tuesday,” The Rolling Stones 1967 smash hit, has a newly created lyric video being released by ABKCO Music And Records in conjunction with the group’s 2018 European Tour. The video features a rhythmic presentation of the song’s lyrics coupled with a dazzling 1960’s-style floral motif.

For this hauntingly beautiful ballad, the goal was to create a romantic and evocative visual inspired by 60s design and an independent, free-spirited woman. To enhance the wistful, baroque feel of the verses, densely decorative floral and paisley patterns which form throughout each scene create a rich tapestry of detail. The lyrics appear in a beautiful, bold, swash style typeface accompanied by calligraphic flourishes. The choruses cut to kaleidoscopic patterns set against a bright ruby red backdrop, ensuring a big hit of colour in contrast to the verses.

The song was written, for the most part, by Stones guitarist Keith Richards in 1966.  “Ruby Tuesday” was inspired by Linda Keith, his girlfriend at the time, who had recently left him for a poet named Bill Chenail; soon thereafter she began dating rising star Jimi Hendrix. “That’s the first time I felt the deep cut,” Richards recollected in his 2010 autobiography Life. “The thing about being a songwriter is, even if you’ve been fucked over, you can find consolation in writing about it, and pour it out . . . It becomes an experience, a feeling, or a conglomeration of experiences. Basically Linda is ‘Ruby Tuesday.’”

Mournful and reflective in tone, the recording features Brian Jones on recorder, Bill Wyman fretting a double bass (with Keith Richards bowing it) and outside help from arranger / composer Jack Nitzsche, who played piano on the track. Initially released in January 1967 as a B-side to “Let’s Spend the Night Together,” “Ruby Tuesday” became The Rolling Stones’ fourth #1 U.S. hit, and got to #3 in the UK. It has since been used in many film and television soundtracks, most notably Academy Award® winning war drama Coming Home (1978) and Wes Anderson’s The Royal Tenenbaums (2001).

The mono version of “Ruby Tuesday,” as heard in the lyric video, is available from ABKCO as part of The Rolling Stones in Mono box set (CD or LP), Singles Collection: The London Years 3CD, as a digital download (standard or HD) and on all streaming services. The stereo version can be found on the Between the Buttons CD (US version), Flowers CD, Hot Rocks 1964-1971 2CD, The Very Best of The Rolling Stones 1964-1971 CD, as a digital download and on all streaming services.

Watch for brand new postings tomorrow, Friday, Saturday (The Saturday Survey) and Sunday … and, Good Lord Willing and the Creek Don’t Rise, maybe even on Monday, too!


Make us part of your Rise and Shine all through Memorial Day Weekend.  (kk)
Posted by Kent Kotal at 6:01 AM