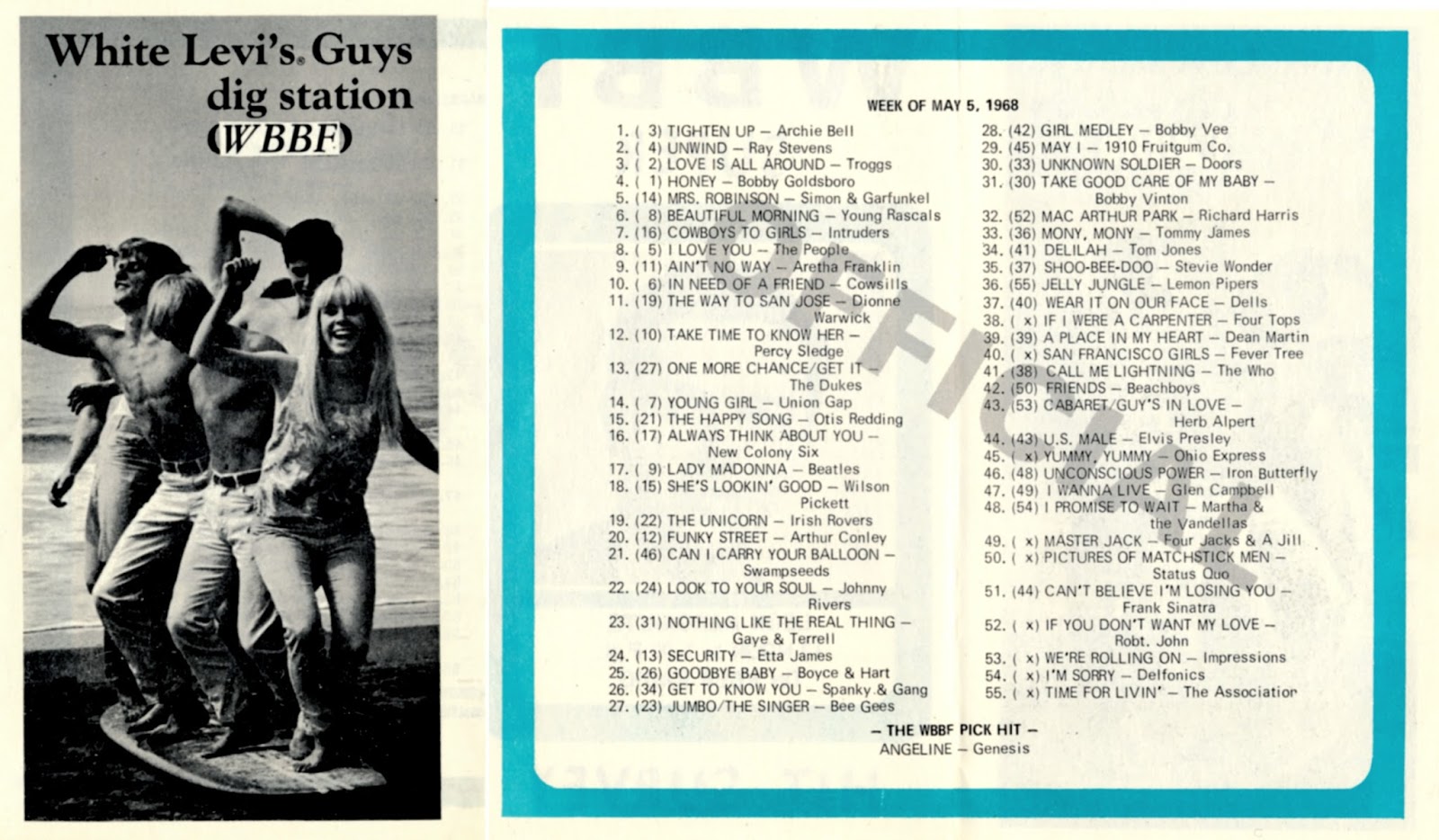 5-5-68 WBBF Rochester, New York
Back up north, Rochester was rolling in RnB too, but with much more diversity on their top 55.  Seeing lesser hits from Ray Stevens and the Cowsills in the top 10 here show the importance of smaller market breakout hits that do make inroads into the national charts.  Here, the Swampseeds are moving up fast with their Mick Jagger sounding vocal bubblegumer, "Can I Carry Your Balloon" and Genesis' early 45, "Angeline," is the Pick Hit.  No, it's not the famous band from England (who also released THEIR first 45 about this time in 1968!), but a Jefferson Airplane sounding psych band from LA.  White Levi's were the fashion statement of 1968, as shown on the survey's "back side."


LOL ... Look how the Levi's ad was designed to just drop in the call letters of the various radio stations across the country running the ad on that week's survey!  (Could it look any sloppier or home made???)


Clark's selected tracks show how much heavier things were starting to sound on the AM dial in May of 1968.  I personally was still more interested in the pop sounds.I love, for example, the fact that Ray Stevens has the #2 Record this week ... it didn't fare anywhere near as well nationally (#44 in Cash Box ... and only #52 in Billboard).  I wouldn't discover the record until a couple of years later when Ray hosted his own television series and performed it there.  (It never charted here in Chicago, where Stevens was unrepresented on the charts between 1963's "Harry The Hairy Ape" and 1969's BIG hit "Gitarzan.")

It looks like Chicago's New Colony Six are slowly inching up the chart this week as "I Will Always Think About You" climbs from #17 to #16.  (It's already dropped off the chart here at home where it peaked at #1 a couple of months earlier.)

The Lemon Pipers jump TWENTY places with their follow-up to their #1 Hit "Green Tambourine" ... "Jelly Jungle" looks to be another smash for the group.  (In reality, it didn't even crack The Top 40 in Billboard ... nor did their REAL follow-up release, "Rice Is Nice," which stopped at #46.)

It's funny how your mind associates certain songs together based on hearing them being played on the radio at roughly the same time.  Two of my all-time favorites make this list ... "I Love You" by People falls from #6 to #8 ... and brand new on the charts this week (premiering at #50) is "Pictures Of Matchstick Men" by Status Quo.  (Man, I couldn't get enough of this record when it first came out!)  kk


BONUS CHART:
We've already covered Illinois in our weekly trek across The United States ... but as we've done several times already (and will continue to do as this series moves on), here's another special WLS Chart from this date in 1968 ... MOST significant because it commemorates the VERY first week that Chuck Buell (a regular Forgotten Hits contributor for years now) began broadcasting on The Top 40 Giant!

I have to admit that I was a little surprised to find this ... for some reason, I guess I always thought of Chuck as more of a '70's jock at the station ... tied into that whole Kris Erik Stevens / John Records Landecker line-up ... man, what a powerhouse WLS was back then!


Wow!  Nice on-target historical radio hit on your part! First week, yes! Note at the very bottom the same date as this Hit Parade.
Below is this accompanying Full Page Chicago Tribune Newspaper ad that WLS ran at the same time ...

“Chuck Buell. New. Now. Nightly from 6 PM to 10 PM
laying down the much more music sound of ‘LS radio.
Listen close. And, try to keep your cool.
Because … the heat is on.”

I wanted them to add, “And playing tomorrow's Forgotten Hits” but management said, “Buell, we have no idea what you’re talking about!”
It was fun then when a station would actually promote their on-air Radio personalities!
Chuck "Great Buell's A Fire" Buell!

I think what they ACTUALLY said was "Buell, we have NO idea what you're talking about ... and neither do you" ... at least that's the way I heard the story.  Who knew that 50 years later we'd both still be famous for what we do ... and what we did!  (lol)  ALWAYS great to hear from you ... and have you onboard! (kk)

THE MUSIC:
Two of my 1968 favorites made this very special W-Buell-S Chart ...

One of the week's biggest climbers is "Master Jack" by Four Jacks and a Jill, eventually a Top Five Smash ... and brand new on the charts is Neil Diamond's "Brooklyn Roads," still one of my all-time favorites by him!  (kk)

4/29/68:  Brian Wilson’s daughter Carnie is born.  As previously discussed, she and sister Wendy, along with Chynna Phillips, daughter of The Mamas and the Papas couple John and Michelle Phillips, will go on to form Wilson Phillips and score three #1 Hits in the ‘90’s.

5/1/68:  The Young Rascals (still billed that way, which is kinda surprising at this point!) appear as guests on a Leslie Uggams television special

5/3/68:  The Beach Boys begin a 17 date tour of the United States with a show in New York. The second half of the concert featured the Maharishi Mahesh Yogi, who lectured the audience on "spiritual regeneration." The reaction was so negative that many of the remaining dates were canceled.

5/4/68:  World-famous Model Twiggy recommends young female singer Mary Hopkin to Paul McCartney, who goes on to sign her to Apple Records, where he will produce her first album.  Mary’s first single, “Those Were The Days,” will top the charts all over the world.  She will also record one of Paul’s songs, “Goodbye,” written especially for her.

5/5/68:  The Buffalo Springfield perform their farewell concert at the Long Beach Arena in Long Beach, California.  Stephen Stills (and later Neil Young) will form his next group with David Crosby of The Byrds and Graham Nash of The Hollies as Crosby, Stills, Nash (and occasionally Young.)  Richie Furay and Jim Messina will form Poco before Messina leaves to team with Kenny Loggins after producing what was supposed to be Kenny’s first solo album.

Also that night, Diana Ross and the Supremes take part in a salute to the music of Irving Berlin on The Ed Sullivan Show.  (They perform “Always” … and then a medley with Ethel Merman!!!)