FORGOTTEN HITS EXCLUSIVE NEWS CONFIRMED:
Kent:
Here’s an exclusive for Forgotten Hits!
During Freddy “Boom Boom” Cannon’s July 15th concert at the Arcada Theatre in Charles , IL , he’ll be joined on stage for one song by popular Me-TV host Svengoolie (Rich Koz).
As you might remember, a couple of years ago Freddy, a big fan of horror films and Svengoolie, wrote a song for the highly rated movie host.  Freddy flew into Chicago and performed on his nationally seen Saturday night show.  A music video was made from his appearance:

Since then, Freddy and Rich have been hoping to find the right time and right place to perform it for the first time in front of a concert audience and that will happen next month at Producer Ron Onesti’s Arcada Theatre.
Sharing the bill with Freddy at the 5pm show July 15th concert will be:
Freddy and I would like to thank Svengoolie’s terrific Producer Jim Roche for his help in making this first-time concert performance come together.
Tom Cuddy
New York, NY 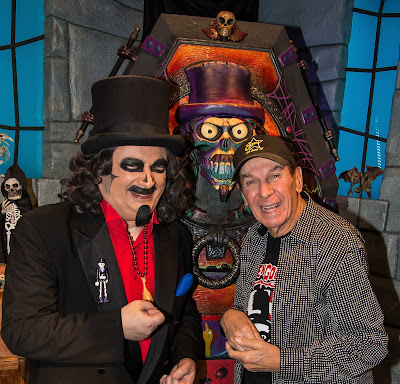 That’s GREAT news, Tom … Ron and I have been talking about this since the day he first booked Freddy to play The Arcada.  Really looking forward to this show and FINALLY being able to say “hello” to Freddy in person!  (Too bad you're not coming to Chicago, too ... would love to finally thank you in person for all your help and support over the past several years!)  kk

HooBoy!
My only response is … I thought the tickets were very reasonable here in the USA.  Everything else stands firm.
Shelley

I have read a lot about Art Garfunkel over the years, and I DO think he's bitter over the duo these days and, just like many duos, if one wrote the songs, it ends in bitterness.  Personally, like Kent, I LOVE Art's solo stuff.  In fact, I will go so far as to say I like Art's solo stuff BETTER than Paul's.  Don't get me wrong … I love Paul's solo stuff, too, but I will take (in order) "Travelin' Boy" (LP version), "Break Away," "Crying In My Sleep,"  "I Only Have Eyes ForYyou," "Bright Eyes," "All I Know," and "I Shall Sing" over MOST of Paul's solo stuff.  Many didn't care for Art's solo stuff, but I think both solo and as a duo, they BOTH gave us great music, bitterness or not!
Clark Besch

Theirs has always been an on again / off again relationship … the fact that they've been able to reunite as many times as they have and live in harmony (by ALL definitions) at all is pretty amazing, especially when you consider that overall you'll probably find that more nasty comments about each other than good ones have been exchanged over the years.  Still, there is a deep appreciation for each other's strengths.  (The very fact that Paul insisted that Art sing "Bridge Over Troubled Water," perhaps one of the five greatest compositions in the history of popular music, proves this point better than any other.  He may have made comments to the contrary over the nearly fifty years since, saying that he should have sung it himself, but he knew at the time he was making the right decision by having Garfunkel handle the lead in what is one of the purest, cleanest, heart-felt vocals ever waxed.)
Will they reunite one more time for the grand finale at Madison Square Garden when Paul Simon wraps up his farewell tour?  I don't know … but I hope so … again, go out on a high note and keep our best memories (and yours as well) intact.  (kk)

One of my favorite clips ever … is this one … when Paul and Art recorded a self-interview about starting their solo careers.   (Seriously, how could you ever top the "Bridge Over Troubled Water" album?  Proof again to leave things on an all-time high.)

DICK BIONDI:
One day circa 1971, while flipping through the cut-out LP bins at Rose Records in Chicago, I came across two albums featuring Windy City radio stars:  "The Torch Is Burning" by Franklyn MacCormack and Dick Biondi's "Teenagers" LP.   At the time I had no idea that either had ever released an album -- and immediately bought both.   I then marched up the street to the tower which held WCFL and took the elevator up to the deserted lobby area which bordered the broadcast studio.   Sure enough, Dick Biondi was on the air.  He spotted me, a college student he did not know, exit the elevator and walk up the studio window with a shopping bag in his hand.  Dick smiled and waved as he continued to read a live promo.  He then saw the student reach into that bag and slowly pull up from it and place against the glass that Dick Biondi LP.  I will never forget the surprised look and wide grin that which broke over Dick's face.  He immediately came out of the booth laughing, saying "Where on earth did you find that?"  With that one gesture, Dick Biondi won a fan for life.
Gary Theroux
"The History of Rock 'n' Roll"
Another great story that would make a fun anecdote for the film (although the album itself is one of the worst spoken word releases ever made … and virtually impossible to listen to!!! Lol)  But Dick knew his audience was the teenagers out there … and he connected with them at a level a lot of other jocks only dreamed of. (kk)

Kent,
I really appreciate the comments that you are posting on FH on the sudden departure of Dick Biondi on the airwaves. I never got the opportunity to hear Mr. Biondi as he did a show live. However, I went and got out my CRUISIN' 1960 LP where one of his shows was recreated when he was on station WKBW in Buffalo. What a joy to have listened to him as one was growing up as a kid.
Larry

Hola Kent,
For all the Dick Biondi fans, Increase Records featured him in their Cruisin’ series for the year 1960. The original Vinyl and follow up CD are available from Amazon. (I couldn’t find him in the iTunes store).
This is a great series featuring hits of that year as well as station promos and ads. Pulled this off the internet.
Keep the Music Alive !
CharlieOFD
(chascot59) 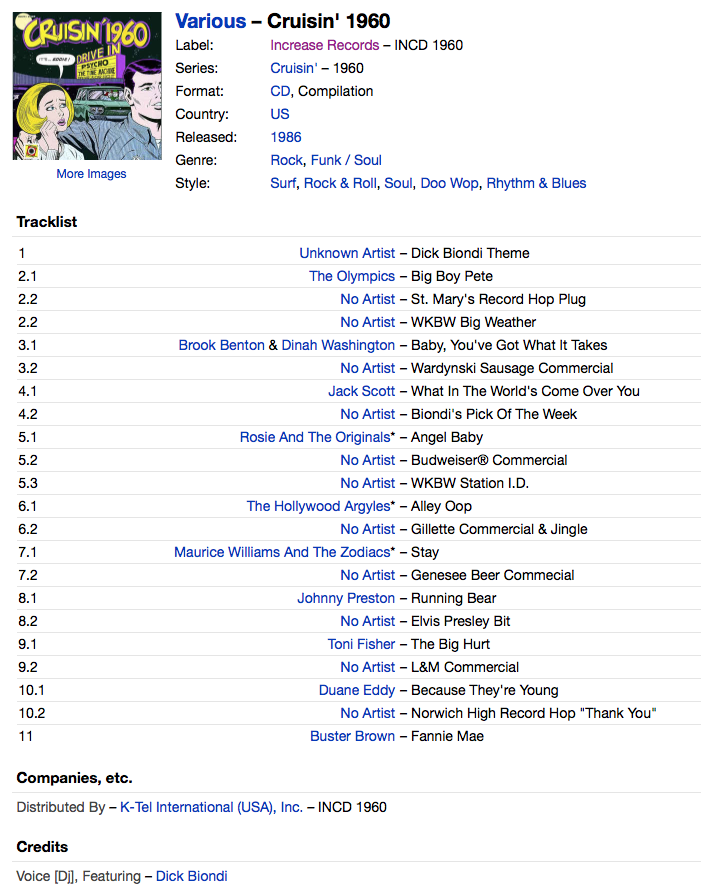 Hi Kent,
I loved the blog this morning … absolutely fantastic that you have devoted it to Dick. Dick deserves everything we can do for him and I am so honored to be part of it all.
You also have some great photos that I do not have and wonder if it's possible to include them in the story.
Thanks, as always, Kent, for everything you do.
Pam
Willing to help in any way I can … I’m sure we can come up with all kinds of photos and memorabilia to include in the film … just helping to spread the word to find out what’s out there.  (kk)


LEAVING YOU WITH A FEW SMILES:
kk:
Tomorrow night Billy Joel is performing at Madison Square Garden.  According to Scott Shannon, Billy will be touring this summer ... Ireland and Europe. Scott said that Billy will also be coming to Chicago.  Check your favorite venue ... maybe you'll get a chance to review him.
FB
Billy has been performing at Wrigley Field every summer for the past several years now … always a sell out.  I have yet to see him … but my daughter has and says it was a great show.  (I've told the story before about how during the course of the past 40 years I have had tickets to see Billy Joel three times … and have yet to make it to a single concert.  Each and every time something came up that prevented me from being able to attend … and all those tickets went into the garbage instead!  The most disappointing time was when Billy was touring to promote his "Innocent Man" album … my absolute favorite by him.  My band got booked to do a show the same night as his concert so I couldn't go.  I remember making an announcement from the stage, expressing my disappointment at not being able to attend the show … "So because we're playing here tonight, I feel really bad that I don't get to see Billy Joel … but then again he doesn't get to see us either."  (kk)

I really don't think the Driver did anything wrong here!
(It's old guys like this guy that give old Forgotten Hits guys like us a bad name!)

Funny!
Imagine if he had seen THIS thing coming at him!  (kk)


Yeah!  And did you notice it comes with that well-known, long established, standard automotive driver assist feature?


The nagging back Seat Driver!
Chuck
Leave it to VW -
How many more cars do you think they’d sell if George Jetson was driving it???  (kk)

I don't know if you get the Hi and Lois comic strip out your way but today's
cartoon reminded me of Forgotten Hits.
Larry