Well, you’ll find yourself mentioned whenever you DO get around to reading them!  (lol)  kk

Wow! I got mentioned in FH! At midnight, I was sound asleep. I had a record show in St. Louis Sunday. I even brought a couple binders of WLS surveys, as well St. Louis, but the fish weren't biting. Shoulda stayed up late and slept in.
Yeah, I saw your ad in the Chicago Tribune, some 40+ years ago. And thru FH I've met Clark & Ed. (I met Frank & Ron at record shows). At the time, I thought I was the only weirdo who collected them. Since then, I've met a lot of others, at record shows, and thru eBay. I'm still four original WLS surveys from a complete set, and I have all the WCFL charts. I have no idea what I'm going to do with them. It makes no sense to sell them individually. Perhaps if WLS were still printing them, 58 years later, a younger generation might be interested. Sad to say, it might be the most valuable asset I own, even more than my house. But what the heck is anyone going to do with 100 copies of a given week?
Jack

Kent,
You asked the question (somewhat rhetorical) if YOU will be up at midnight to read Sunday's edition of FH. I bet you that Eric Clapton and Wilson Pickett will be up looking forward to reading it.
Larry Neal
From what I understand, Mary will be there, too!  (kk)

Yes I will!  Right after my last song of the night.   I will read it during my cool down.
Phil
Thanks, Phil … based on what I’m seeing here, I think you may have been the only one!  (kk)


HA!  Then my accompanying morning ritual of "Reading Forgotten Hits with a Cup of Coffee" routine would keep me UP the rest of the night!
So, as the Cyrcle sang in 1966, I'll check in with you when,
The mornin' sun is shinin' like a red rubber ball!"
CB ( which stands for "Celestial Boy!" ) 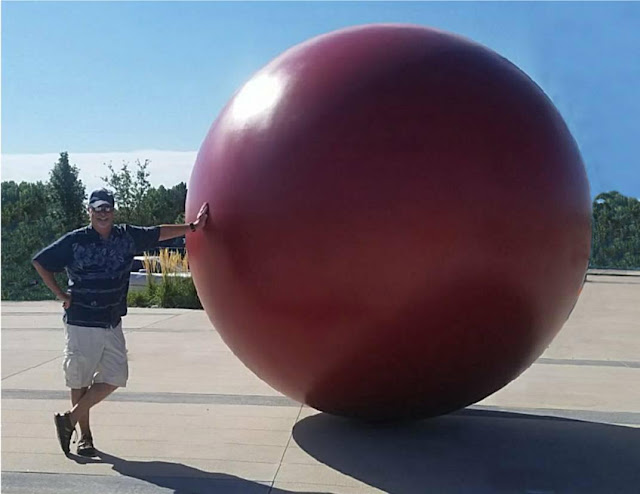 kk …
Scott Shannon just announced that "Big Dan Ingram" died yesterday.  He was retired and living in Florida ... 83 years old.  Worked for WABC and WCBS-FM.
Here are a couple of samples of his style …
https://www.youtube.com/watch?v=cBr308F3lIA
https://www.youtube.com/watch?v=Oq39aI4O4g8
FB
Dan was one of the greats … one of those “love him or hate him” kind of guys who always pushed the envelope (and sometimes went too far.)  It seems like in his latter years, he was caught too often talking without giving any actual thought to what he was saying … and that’s a shame because he really was quite revolutionary for his time.
Ingram always made his mark by what he said … and was generally quite entertaining … but in this era of “political correctness,” he veered off track a few too many times in recent years.  (Don’tcha just kinda long for the good old days when people could get away with saying just about anything without being taken to task for it?!?!)
Still, he made his mark on the radio landscape … and will go down as one of the greats.  (kk)

One of the best radio talents ever - all microphone boom-stands should be lowered to half-mast.  The king of the double entendre has passed.  :-(
Dick Bartley

Dan brought the World some much needed laughin' and scratchin'
Lee A. Whitney

Kent,
Here's an email I sent in to FH in late 2015.  It has my Dan Ingram comp from 1965 with the Beatles having three hits played in an afternoon Ingram show.  This has only been on FH as far as I know, because it is from my personal tapes.
Clark Besch

KEWB
Kent,
Seeing Yesterday and Act Naturally at #1 with Help! and I'm Down at #14 shows there was still some extra saturation in late ‘65 of Beatlemania.  It got worse fast.  Capitol Starline's 45 release of the old cover of "Boys" created more controversy and saturation.
On October 11, 1965, the Capitol Starline "reissue" label released ten old Vee jay tracks on five singles.  "Boys" got the main attention, even garnering Billboard's "Top 20 Singles" prediction in the October 23, 1965 issue!  The very same week, the record was already listed as #102 on the Hot 100 Bubbling Under.  It seems that Capitol realized it was not a great idea to promote the old song and tried persuade stations from playing it as a new release the following week.
The song started at #38 on WLS on their October 22nd chart and then zoomed to #18 and quickly disappeared.
Attached is the WLS chart from October 29th and also the WABC New York chart from Oct 23rd where "Boys" was the pick hit while "Yesterday" was #1 and "Help!" #12.
To add more proof of Beatlemania's hold in late 1965, here's a clip from my tapes that has NOT been passed around.  In just an hour, you'll hear the three singles featured four times on the Dan Ingram afternoon drive time show!
More interesting may be seeing (and hearing) "Eve of Destruction" on this WABC air check and #4 on their chart.  With ABC’s close ties between WABC and WLS, you will not find "Eve of Destruction" on a WLS chart.  In Billboard, Gene Taylor made headlines singling out "Destruction" as not appropriate for the station to play.
Clark Besch

In other disc jockey news, congratulations to Johnny B (Jonathon Brandmeier) who was elected into the Radio Hall Of Fame on the very first ballot.  Brandmeier was the bomb on Chicagoland radio in the ‘80’s … MUST listen to radio at the absolute prime of his career.
The official ceremony will take place in November … but Media Guru Robert Feder broke the story this way:
http://www.robertfeder.com/2018/06/25/johnny-b-voted-radio-hall-fame/?utm_source=new%20post%20alert&utm_medium=email&utm_content=main%20content&utm_campaign=%2F2018%2F06%2F25%2Fjohnny-b-voted-radio-hall-fame%2F

Kent:
I just noticed something weird with the WCFL surveys that you posted.
There is a time difference of about 1 year and 10 months between them ... yet, there is an issue difference of 251, or about 4.8 years, based upon one issue a week.  What accounts for the difference?
Mike Brown
I couldn’t tell ya … but when looking at the chart to see what you were talking about, I noticed something FAR more disturbing.
Both charts show a copyright date of 2009 … which means they’re fakes!  That tells me that somebody took the template of the display chart and recreated it in order to simulate what a printed WCFL Chart might have looked like in 1968 or 1969.  (That being said, they look wonderful … and I wonder if whoever did this, did one for EVERY missing week between May, 1968 and January, 1970 … ‘cause I sure would love to get a complete set.)

HOLD THE PHONE:  They’re TOTAL fakes!!!  I just checked the 1968 chart against the one actually issued by WCFL that week (they were still distributing their surveys in stores at the time) and they DO NOT MATCH!!!  As for the December 7, 1969 chart, WCFL did not publish ANY chart for this week in ANY fashion … so this, too, is “made up” information.  Sincere apologies to anyone else out there who may have shared my enthusiasm for this brand new find.  (What a shame … ‘cause these are beautifully done.  Some creative person out there ought to gather this information and put together a set of REAL ones!!!)

With all of that being said, I would like to point out that our FH Buddy Bill Hengels did the same thing for the missing WLS Charts in 1972 and 1973, recreating the look of the red and blue 1971 charts and then dropping in the correct chart information into each border.  He sent me a complete set several years ago (but unfortunately, they were done as Power Point Files so I can’t really do much with them.)  I scanned a spread of three consecutive weeks to show you what they look like.  (Sadly, Bill passed away a few years ago after years of battling a series brain tumors.  He was one of the nicest guys you’d ever want to meet … and took real pride and pleasure in his WLS and WCFL Survey collections … as he should have … they were a complete set of originals in pristine condition.  I’ll have to speak to his wife Mary about possibly putting these on display at The Chicago Music Hall Of Fame once we finally get things up and running there.)  kk 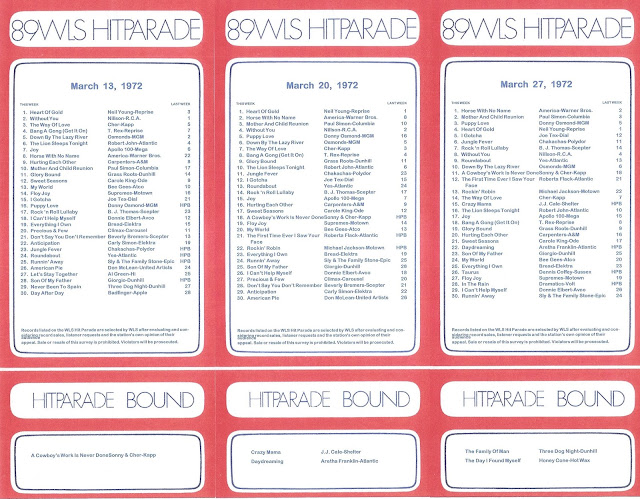 Ed Erxleben's great email on the Variety charts makes me beg the question:  Joel Whitburn, could you get the Variety charts and do a book on THEM?  They had a top 50 or 60 in the 60's and also did 45 reviews.  Would love a complete set book on those records and chart positions!  I have many of those mags (papers), but not even near a set of any kind.  Ed has done some great research, it seems.  Seems impossible that Third Booth's "I Need Love" did not bubble under when a #2 in Chicago and top 10 in Pittsburg on WLS' sister station, KQV.
Clark Besch
I remember talking to Joel Whitburn a few years ago, after he had completed the trifecta of national charts by publishing the results of Billboard, Cash Box and Record World, what was next … was Variety an option?  (Honestly, I have no idea how extensive these charts may have been … how long did they run and would they really capture the crux of The Rock And Roll Era?)
If I remember correctly, he had already been considering it and had amassed a fairly large collection of issues that might help enable him to do so at some point and time … but as I say, that was awhile ago.
Maybe Joel can give our readers and update as to where things might stand with such a concept.  Stay tuned!  (kk)

I must have been no more than a half dozen rows behind you at the Monkees show. I, too, was dead center. I was not surprised when I read about Mike. My date and I both made the observation that Mike looked disorientated at times. I gotta wonder if his live shows are history.
A couple observation about the crowd ...
I was happy to see that the crowd remained seated almost to the end. I no longer am able to get up and sit down for every song. I'm also pleased that the audience didn't sing along with every song. I do not pay 100 dollars a ticket to hear someone else sing, besides the performers. I’m also glad the audience wasn't into swaying back and forth. I was ready to use my cane, if need be.
Jack
I’m just glad we got to see them when we did.  If for any reasons these cancelled / postponed shows are not rescheduled, at least we got to see Micky and Mike at one of their final performances together ever. (kk)

Kent:
For a better version of the James Corden segment with Paul McCartney,
download the following pieces and then unrar them:
http://vidiot.com/video/JamesCorden-H264-PaulMcCartney-DD20-180622.part01.rar
thru
http://vidiot.com/video/JamesCorden-H264-PaulMcCartney-DD20-180622.part11.rar
The source is the CBS network H.264/4:2:2 15Mbps Dolby-E recoded to H.264/4:2:0
5Mbps (2-pass x264 encoder).  The audio is converted to Dolby Digital 2.0 @ 512kbps.  While your local CBS affilate did DD5.1 (with only left and right), I did it as two-channel because James Corden is only recorded and sent to the affiliates with two-channels over the CBS network's 5.1 audio feed.
It will take a while to download.
Mike Brown

kk:
Wild Wayne posted this on FACEBOOK.  I've seen it before but I can't remember where.  This isn't your daughters group, is it?
FB.
https://www.youtube.com/watch?v=k7qA72LhMO0&feature=share
No, just somebody else doing something similar … Paige’s performance (as The Saxonettes) is below (from 2012)  kk
https://www.youtube.com/watch?v=Xcp8OZ38jJs