Strangers In The Night - Part 2

“Strangers In The Night” was written by Bert Kaempfert, the German producer / composer / recording artist who had his own #1 Hit in 1960 with the instrumental “Wonderland By Night.”  [Kaempfert also wrote the Wayne Newton hit “Danke Shoen,” another Sinatra hit (“The World We Knew”), “Spanish Eyes,” the Nat “King” Cole hit “L-O-V-E,” “Wooden Heart,” a #1 Record for Joe Dowell (and a movie hit for Elvis Presley), and was the first producer to officially record The Beatles in a professional recording studio when he paired them with singer Tony Sheridan for a few tracks in 1961, recorded while they were performing in Hamburg, Germany.  (Their rockin’ version of “My Bonnie” would be released here three years later when Beatlemania first hit The States.  At that same recording session, The Beatles performed an instrumental track called “Cry For A Shadow,” written by John Lennon and George Harrison (!) as well as a scorching John Lennon vocal on the old standard “Ain’t She Sweet,” once again rocked up to embrace their love of rock and roll.)]

NOTE:  There has been a considerable amount of controversy over who actually wrote this #1 Hit in recent years but the most accurate truth would seem to indicate that Kaempfert was, at the very least, a principle writer.  (Also, rumors that the song was originally inspired by and dedicated to Albert DeSalvo and written as “Stranglers In The Night” proved to be unfounded ... probably because they only existed in my twisted mind!)

Although “Strangers In The Night” topped all three of the national trade publications (Billboard, Cash Box and Record World), it never hit #1 on our Super Chart.

How is this possible?

Because once again it falls into that “Timing Is Everything” category.

“Strangers” first hit #1 in Cash Box Magazine, topping the chart on the survey dated June 18, 1966 (Paul McCartney’s 24th birthday)  It ranked #4 in Record World and #5 in Billboard for that week, so it didn’t accumulate enough points to top The Super Chart.  (“Paint It Black” by The Rolling Stones held that honor, thanks to coming in at #1 on both the Billboard and Record World charts.)

Then, the week after that (July 2nd), it finally hit the top in Billboard, by which time it had fallen to #2 in Cash Box and #2 in Record World.  This week The Beatles topped both the Record World and Cash Box Chart with “Paperback Writer,” so once again it outranked “Strangers In The Night” when the points were tallied for Randy Price's Super Chart.

(One of the points we struggled with when we assembled The Super Charts was the fact that some records that reached #1 in all three major publications would NOT reach #1 on The Super Chart due to situations like these.  It would happen again later this same year when “Good Vibrations” failed to top The Super Chart despite hitting #1 in all three major trades.)  My feeling was that as long as ALL of the real national #1 Records were recognized, we should make the exception to allow an across-the-boards #1 Hit earn that distinction on our chart as well … but Randy argued that this would be taking away a week from #1 for the song that really deserved and earned it.

My counter argument was, in the scheme of things, did it really matter if “Paperback Writer” spent one week at #1 instead of two so that another legitimate #1 Hit could be properly recognized?  It just didn’t seem right to me to deny a bonafide #1 Hit that status in our own recap … and The Beatles would still get their due with a #1 hit ... but, at the end of the day, I finally gave in to Randy’s wishes because, if nothing else, we could officially and unequivocally say, without ANY reservations, that the charts we have produced are what they are … and what they are is the most accurate representation of song popularity for every week of the rock era … because we never wavered on the criteria … and we never bent the rules.  As such, these charts were assembled without ANY bias … and therefore state the facts EXACTLY as they happened at the time.  With spreads of 20+ points in some cases between the three major trades, our collection of chart data offers, without question, the most definitive representation of the pop singles charts for this era.  (To quote Edith Ann … “And that’s the truth!”)

Below you’ll find a copy of The Super Chart showing “Strangers In The Night” at #2, a position it held for two consecutive weeks, in July of 1966. 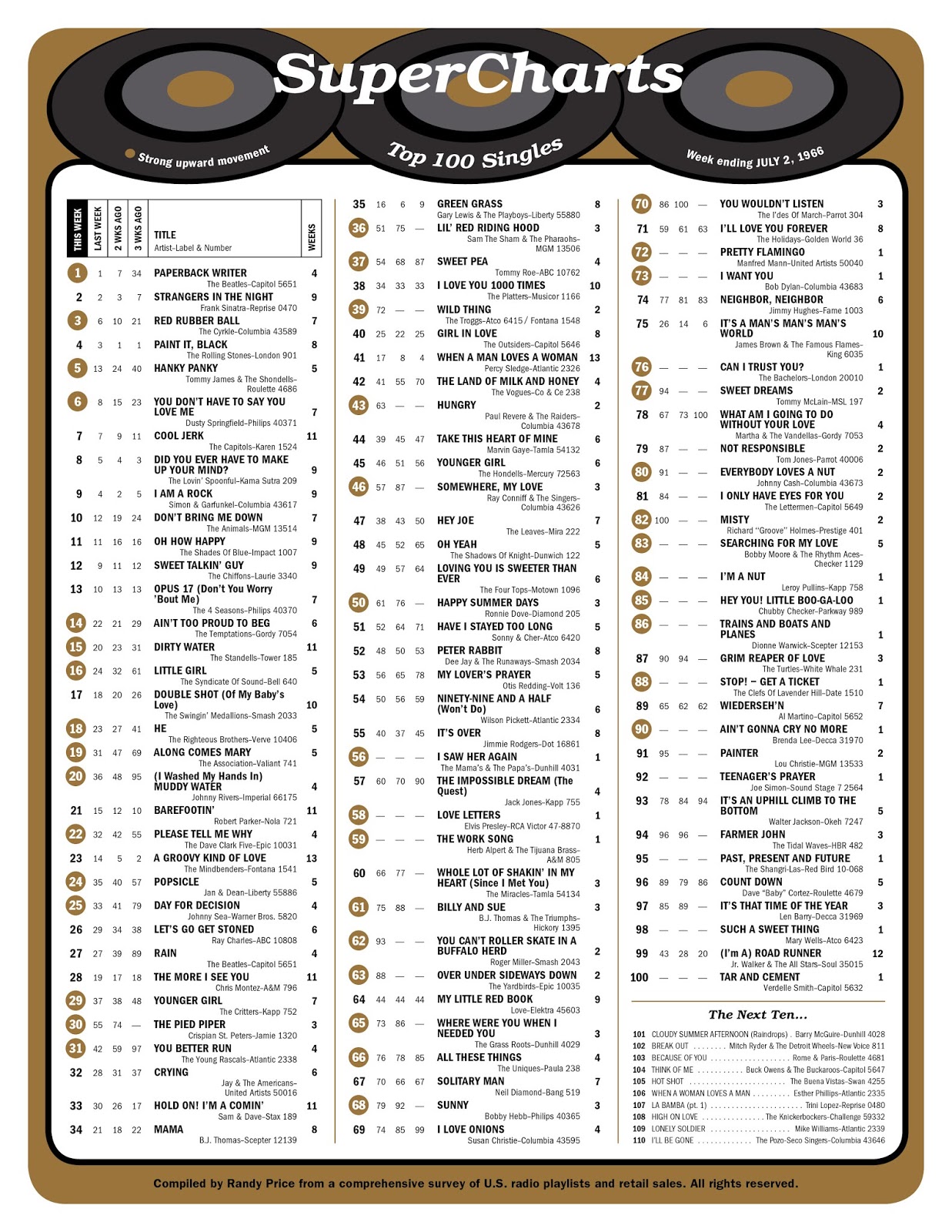 One look at the above chart shows you just how out of place "Strangers In The Night" really was.

Be sure to stop back tomorrow (somewhere between the cook out and the fireworks) to see the final chapter as this special mini-series wrap up.

Meanwhile, here's a clip that somebody put together using footage from the film "High Society" that Frank Sinatra made with Grace Kelly ten years earlier ... set to the tune "Strangers In The Night."