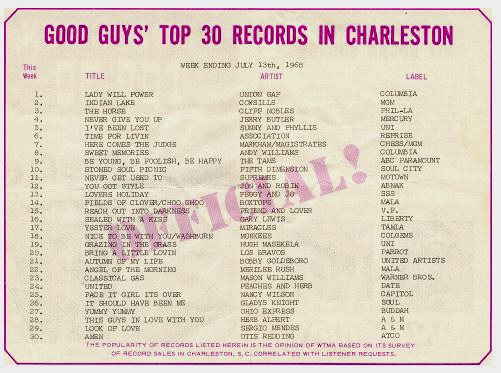 This, the largest city in the state, sits near the coast of South Carolina.  There's not a lot of obscurities on this top 30, but a couple we'll feature here.  There are a couple of two siders with the B side listed first (Monkees and Box Tops), but Sunny & Phyllis & the Danes' #5 "I've Been Lost" is a pretty cool unknown ditty for sure!  We visited Jon & Robin's "Dr. John" awhile back, but the followup, "You Got Style," is a more pop sound written by Andy Kim and Jeff Barry that should have been a big hit nationally.  To me, this song could have been a perfect tool for Davy Jones and the Monkees to keep the hit parade going in place if "D.W. Washburn" this summer.
-- Clark Besch


We've seen "Lady Willpower" at #1 in several different states now ... yet it never reached the top in Billboard.  (It did reach #1 in both Cash Box and Record World, as did their previous hit, "Young Girl," which also stalled at #2 in Billboard Magazine.)

New on the chart this week is "Classical Gas" by Mason Williams.  Not only is Mason an accomplished guitarist and songwriter, but he was also employed as a comedy writer on The Smothers Brothers Comedy Hour!
(kk)

7/12/68 – Micky Dolenz marries his first wife, Samantha Juste, who he met when The Monkees went to England the year before.  The union will last six years.