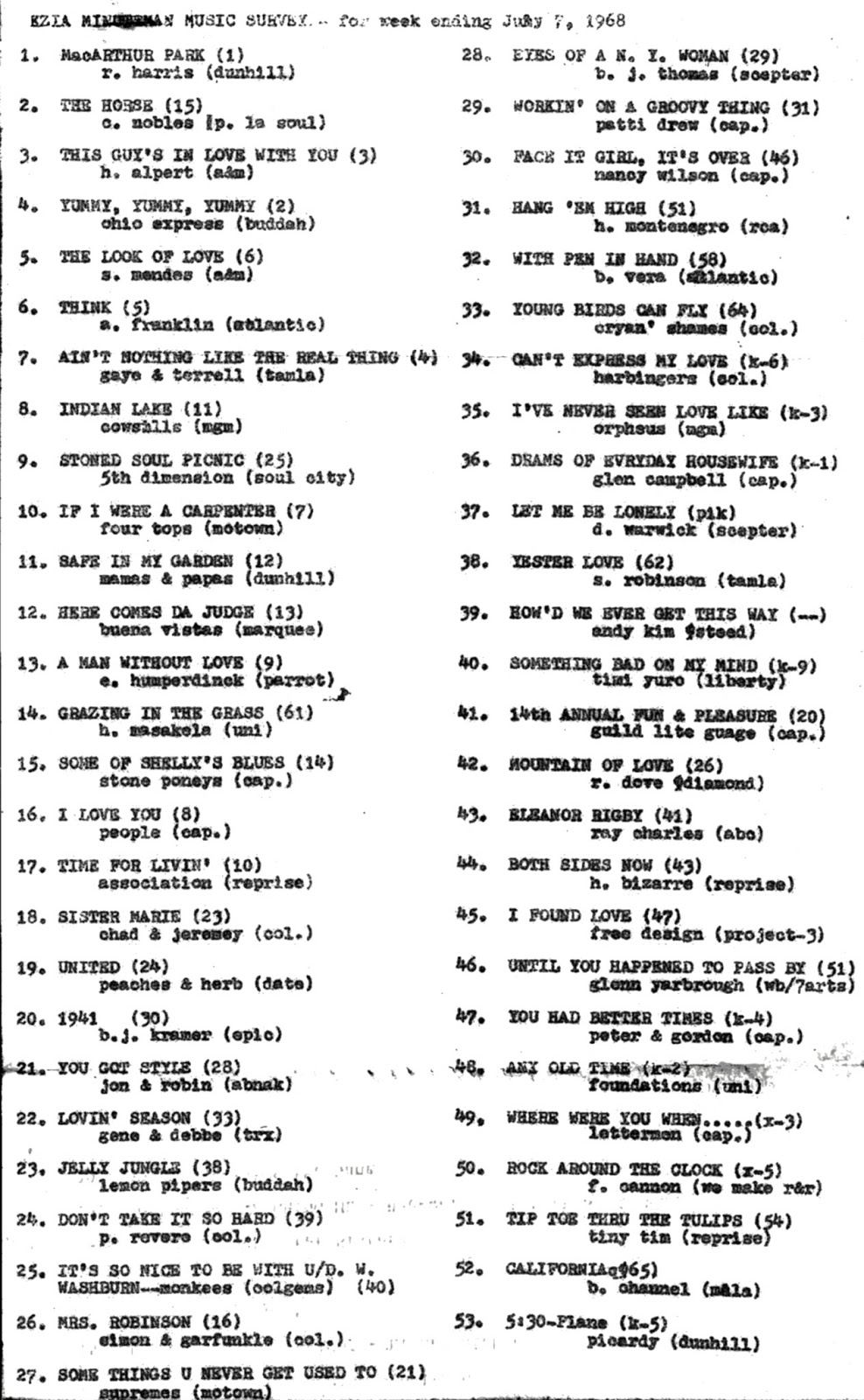 Here's a chart from Albuquerque, New Mexico ... damn, I swear my old manual typewriter that I used to type my own weekly lists had a cleaner ribbon than whatever they used to type this thing did!!!

Richard Harris' "MacArthur Park" tops the chart (for at least the second week in a row) while "The Horse" by Cliff Nobles and Company jumps 13 places from #15 to #2.  (Another instrumental hit, "Grazing In The Grass" by Hugh Masakela, does even better, leaping from #61 all the way up to #14!!!)

The Fifth Dimension climb 16 spots from #25 to #9 with "Stoned Soul Picnic" while "Don't Take It So Hard" by Paul Revere and the Raiders and "It's Nice To Be With You" by The Monkees both climb 15 places to #'s 24 and 25 respectively.

Some big chart action in the lower regions of The Top 40 this week as "Face It Girl, It's Over" by Nancy Wilson is up 16 spots to #30, "Hang 'Em High" by Hugo Montenegro jumps from #51 to #31 (the big national hit version of this song will be done by Booker T. and the MG's) and "With Pen In Hand" by Billy Vera (always my favorite version of this track, although I did enjoy watching Vikki Carr break down and cry every time she performed it) climbs from #58 to #32, a jump of 26 places.  (Billy would top the charts nearly 20 years later when "At This Moment" was re-released to cash in on its use in a couple of popular TV shows.)

But the BIG news this week is Chicago's very own Cryan' Shames, who move up 31 places with "Young Birds (Can???) Fly."  This record topped out at #99 in Billboard ... but looks headed for success as we head for the border this week in '68.  (kk)

There were "Good Guys," "V.I.P.'s" and Albuquerque had the KZIA "Minutemen" as their DJs.  The city of half a million sits near the center of New Mexico and, in 1968, had KZIA belting out the hits.

There are some great obscure tunes on this chart -- too many to choose from.

You may think #12 is a local band doing the Shorty Long hit "Here Comes the Judge," but this is a different song and (basically) an instrumental with the same title!  Our FH member Billy J. Kramer was top 20 with then unknown Harry Nilsson's cool song, "1941."  Those Cryan Shames faves of mine are flying up the chart from #64 to 33!  There's FHer's Freddy Cannon reviving "Rock Around the Clock" and the Lettermen's theme from the hit movie "Where Were You When the Lights Went Out," if you remember that magical NYC night.

Two songs I absolutely love from this chart are Orpheus' Bosstown sound "I've Never Seen Love Like This" (#35) and Picardy's "5:30 Plane," a Jimmy Webb song (#53) followup to their movie theme "How Sweet It Is" hit, "Montage."  So many cool songs here to be heard that did not make it out of the hot New Mexico summer to stardom.

Also on 7/5/68:
Bill Graham opens the Fillmore West concert venue and The Doors appear at the Hollywood Bowl.  Also on the bill … Steppenwolf, The Chambers Brothers and Sweetwater

7/7/68 - The Yardbirds announce their breakup – Jimmy Page has already begun formulating the basis of his next band … Led Zeppelin.  (Although they were first known as Jimmy Page’s New Yardbirds.) The Led Zeppelin name reportedly came from a quote by Who Drummer Keith Moon who, when told of Page’s idea to form a “hard rock blues group,” responded, “Oh … that should go over like a lead zeppelin” … which Page then copped for the name of his new venture.

Also on this date, Ringo Starr turns 28 years old.
Posted by Kent Kotal at 6:00 AM