FORGOTTEN HITS FIELD TRIP:
For years we've been talking about getting a bunch of our readers together to do a pilgrimage to The Rock And Roll Hall Of Fame in Cleveland but have never been able to coordinate things enough to do so.
Well, now comes an idea that only requires us to travel downtown ... 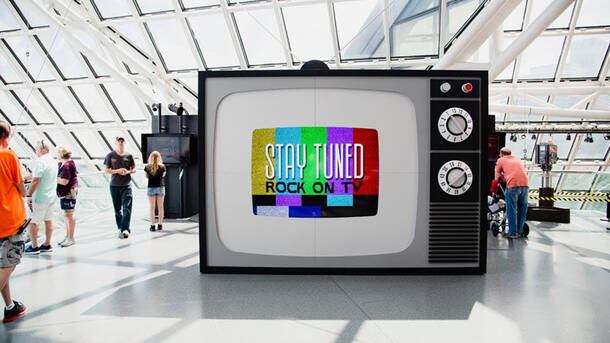 Straight from the Rock & Roll Hall of Fame in Cleveland, come out and be part of the first stop of the nationwide tour of the Stay Tuned: Rock On TV exhibit. Walk through the wild world of rock history — from American Bandstand to the heyday of MTV — and snap a selfie with everything from Lady Gaga’s “Bad Romance” costume to ZZ Top’s epic Eliminator car.

From the Event Organizer:
In this multi-sensory, and multimedia exhibition, visitors will also see the birth of the music video, how it reached its pinnacle with the launch and domination of MTV and its sub-brands and used its technology to push music and artistry to new heights. Since exploding onto the scene in the post-war 40s, television and rock & roll have reflected social values, shaped the youth culture and created icons. In its early days, they sat at opposite ends of the table, with tv showcasing the normalcy of nuclear family and strong moral lessons, while rock & roll questioned the establishment with a rebellious attitude. But as television sets became a household fixture, advertisers sought to reach the booming youth and teenage demographic and their expendable pocket money, cracking the door for rock & roll’s acceptance into the mainstream through shows like American Bandstand, The Ed Sullivan Show, and The Adventures of Ozzie and Harriet.

Additional Information:
Over 300 Artifacts included in Rock On TV including:
-Stage designs from the Beatles’ appearance on The Ed Sullivan Show
-Outfits worn by the Jackson Five during their first live performance of “I Want You Back” on Hollywood Palace
-Soul Train sign and clothing worn on the show
Paul Shaffer’s Kurzweil 250 keyboard from the Late Show with David Letterman
-Clothing worn by Sonny and Cher
-The acoustic guitar played by Eric Clapton on MTV Unplugged
Numerous items related to Saturday Night Live
-Contracts between artists and American Bandstand
-Johnny Cash’s suit worn on his ABC variety show
-Davy Jones jacket worn on The Brady Bunch
-And more … 300 artifacts total!

Would LOVE to put something together before the weather really takes a turn for the worst.  (Hey, what am I talking about?!?!  We had snow on Halloween this year ... and more expected today!!!)
But this would be a fun way to spend an afternoon ... so if you're interested in taking part, let us know and we'll try to coordinate some date options to meet downtown and view this exhibit.  (Groups of ten or more even qualify for a 33% ticket price discount!)  kk)

HAVE YOU VOTED YET?:
Don't forget to swing on over to the Rewound Radio Website and cast your votes for your Top Ten All-Time Favorites ...
They'll be counting down The Top 77 during the week between Christmas and New Year's ... and also playing EVERY song that was nominated during that stretch.  (Who knows ... it COULD exceed our own list of Top 3333 Most Essential Classic Rock Songs!!!)
Vote for your Top Ten Favorites here:
https://musicradio77.com/voting2019.html

THE TOP 3333 MOST ESSENTIAL CLASSIC ROCK SONGS OF ALL TIME:
Hi Kent!

Thanks a million for keeping the music alive.
I needed some fresh inspiration so I decided to look through the Essential Classics. Wow! What a treasure trove!!!
At first, I was gonna comment on You Baby by the Turtles. As many of you know, I met my wife Karen in line to see the Turtles at Riverside Brookfield High on April 9, 1968.
Though I often site Happy Together as our favorite from that night, tied for first was PJ Sloan’s pop masterpiece, You Baby. Sheer innocent genius. And the boys performed it great that night. (Drummer Johnny Barbatta even had tom toms to play. Lol!)
Then I decided to write a bit on Look Through Any Window by the Hollies.  Bus Stop may have been a bigger hit, but Window was my hands down fave. Perhaps Graham Gouldman’s magnum opus in a platinum catalog that included No Milk Today, Bus Stop, Heart Full Of Soul, I’m Not In Love and so many more.
Then for grins I decided to visit the Focus video, the Dutch group performing their smash Hocus Pocus.
Holy Shite!!
If any group ever deserved the standing ovation they received, it was from this performance. Pure excitement and perfection. They were heavy before there was heavy. I’ll put that guitarist with Page any day. Guess who’d win.
And the keyboard Yodeler, Whistler, flautist is hilarious and awesome. How bout the drummer. Omg!!
Apparently the group did this song as kind of a spoof of all the excesses of rock & roll.  Call it what you will, it’s massive. And they played live on TV with Marshals dimmed on 10.  (Or Eleven - that’s one louder isn’t it?)
If you wanna wake up without coffee, please watch Jimbo’s Pick!!
Thx, Kent, for all your hard work for us rock geeks!
Rock on!!
Jimbo
If you haven't seen the movie "Baby Driver" (great fun with an incredible soundtrack), the scene featuring "Hocus Pocus" is definitely one of the film's highlights ...
The bullets / gun-play are choreographed PRECISELY to the music of this great rock hit.  Worth the price of admission for this scene alone!  (kk)

And, speaking of countdowns, this just in from FH Reader Frank B ...

FAVORITE, FORGOTTEN B-SIDES:
We told you that our FH Buddy Sam Tallerico was featuring B-Sides as part of his weekly Lost And Found Oldies Show on WVKR. (LAFOS)
Well, that program has now been archived and will be available for listening for the next week here:
Lafos B-Sides With Primitive George November 9, 2019
They picked some pretty obscure favorites to feature ... but also some of the top picks as well ... a WIDE variety of musical styles ... and, from what I understand, so well received that they'll be doing it again soon.  (Co-Host Primitive George wanted to do another episode next week!!!  LOL)  I toldja this topic makes for PERFECT oldies fodder ... as this is the generation that grew up with appreciating the B-Sides of every record they bought.  (But George HAS to stop giving the website information out as ForgottenOldies.com ... they'll NEVER find us if that's what they're searching for!!!  Our lists are posted at ForgottenHits.com ... and that's where listeners need to go to view the complete list.)
Might I suggest an All Listeners' Request Show somewhere down the line???  I think that'd be a whole lotta fun!  (kk)
Thanks, Kent, very well received. I appreciate the inspiration.  At work now, looking forward to my mid morning website browsing of which FH is a thrice weekly must!Thanks again,
Sam
A great re-discovery for me was Leo Sayer's "Hold On To My Love" ... what a GREAT track ... however, I don't see it listed as either an A-Side OR a B-Side in Joel Whitburn's book ... but I sure do remember lovin' this track when it came out in 1977 on Leo's "Endless Flight" album.

That radio.com stream for Me-TV-FM must be pretty popular ... it took me multiple tries to start it!
-- Bob Frable
We've been giving out this link for awhile now ... hopefully readers from coast to coast who don't have a Me-TV-FM station in their area can now enjoy what we have been experiencing here in Chicago!  (kk)
Good morning, Kent:
Incredible blog today.  And thank you for the lengthy piece you did on our “45s and Flipsides Weekend,” complete with many of the listener comments we received on the feature on social media.
The “With and Without,” “First and Foremost,” and “Before and After” concepts are definitely doable.  We’ll definitely consider each of them in 2020.  We’ll have to spread them apart, though, since they’re basically variations on the same theme:  two songs in a row by the same artist.  To the majority of our listeners, who aren’t aficionados, each one is basically going to sound the like we’re doing the same thing again.  So, we’ll maybe do one per quarter—something like that.
Rick O’Dell
Program Director
Me-TV-FM
We've got LOTS more "themed" features we can offer that I think your listeners will enjoy ... including a VERY special one for Me-TV-FM's upcoming anniversary.  (Let's do lunch!  lol)  kk

THE FAB FOUR:
Hi Kent!
I just wanted to thank you for the tickets to the Fab Four at the Arcada last Friday.
The show was incredible. Even though you built it up, I was quite surprised at how good it truly was.
The Fab Four put on a totally awesome show from beginning to end.
Their rendition of "A Day in the Life" absolutely blew me away. It was incredibly powerful.
"Something," backed by a photo montage of George Harrison, actually brought a tear to my eye.
After the show at our meet-and-greet, I walked up to "George" and said, "Hey, man. You made me cry."
He responded, "Seriously? Did you really think I was that bad?" I laughed really hard.
They were really great guys and put on a show that everyone on the Forgotten Hits list should attend the next time they come to town.
Thank you -
Steve Sarley
THE OUTDOORS EXPERIENCE

NEW STUFF:
The Royal Philharmonic has added their orchestral touches to a baker's dozen Christmas Classics for this year's holiday season. (Now THIS one might be worth adding to our collection!)
Available at the end of the month thru Amazon.com, you get holiday favorites by Elvis Presley, Andy Williams, Johnny Mathis, Dean Martin, Doris Day, Tony Bennett, Harry Belafonte, Perry Como, Eartha Kitt and Roy Oribson.
Ordering information here: Various Artists, Christmas with the Stars and The Royal Philharmonic Orchestra (Legacy, 2019) (Amazon U.S. / Amazon U.K.)

Hi to all ...
Here is the Spotify link to my new EP, 2020 Vision.
Hope you enjoy!
You can also find on Amazon, iTunes, and all the other platforms for streaming and downloads.
Spotify Link - https://open.spotify.com/album/5b5tMcmavguKhH6ftHQ9Dl 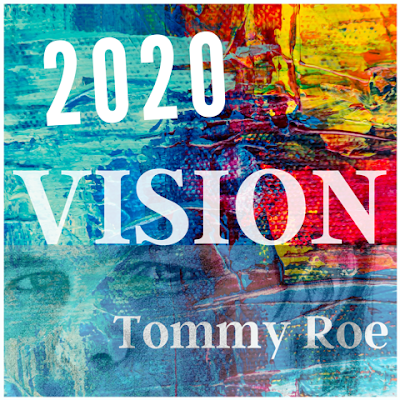 Bravo Kent❗️
Much deserved accolades,
Phil
PrayForSurfBlog.blogspot.com
Todd Rundgren Presents Braille Copy of His Autobiography “The Individualist” To The Library of Congress 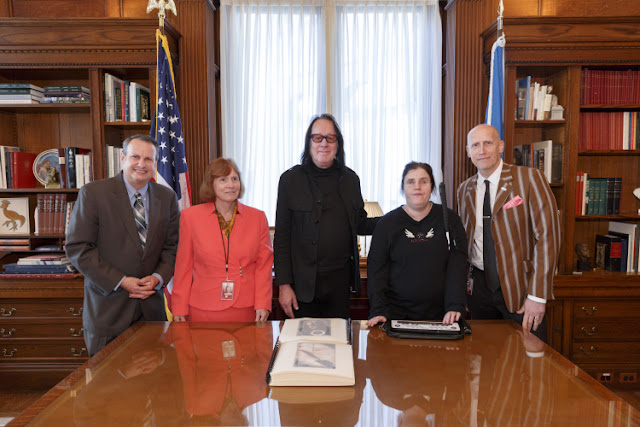 Longtime fan of Todd Rundgren Julie Dye attended his show in Cleveland on May 6th and presented Todd with a Braille version of his book “The Individualist” that Chelsea, her blind daughter, had made by hand.
As the first leg of the current White Album Tribute tour featuring Todd Rundgren, Micky Dolenz, Christopher Cross, Joey Molland and Jason Scheff was ending in Washington, DC on October 20th, Todd thought of presenting the book to the Library of Congress (specifically the National Library Service For The Blind And Disabled division). 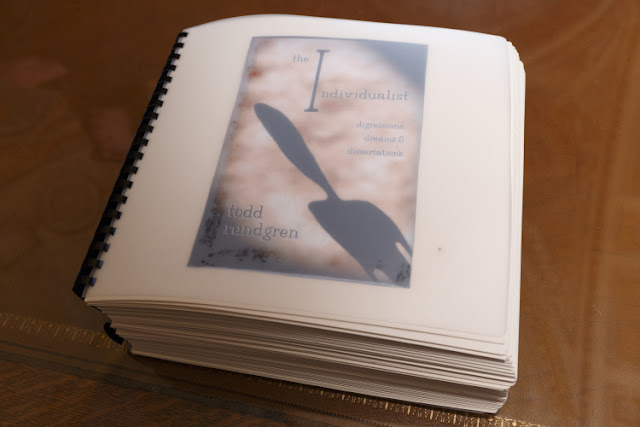 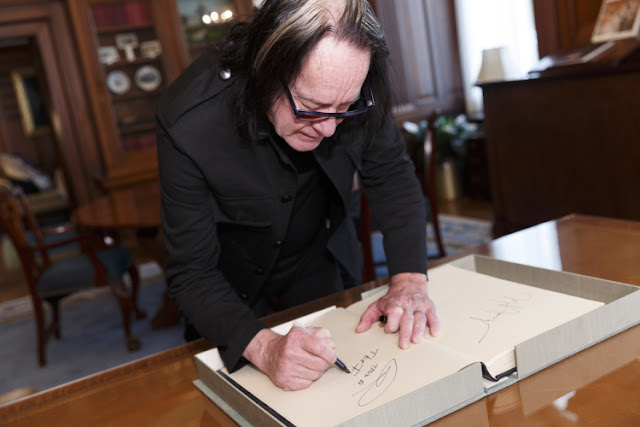 The second leg of the White Album Tribute tour resumes on November 30th in Pittsburgh.
Posted by Kent Kotal at 6:00 AM