kk:
Have you heard this update of the Billy Joel song, The Longest Time, 2020 … The Quarantine Edition?
Frank B.
P.S.  Might be Clip Of The Week?

Yeah, I might have to give it to you this week, Frank … VERY well done, brilliantly executed (and some damn clever lyrics, too!)  kk

But then if I do, THIS has got to be the photo of the week … 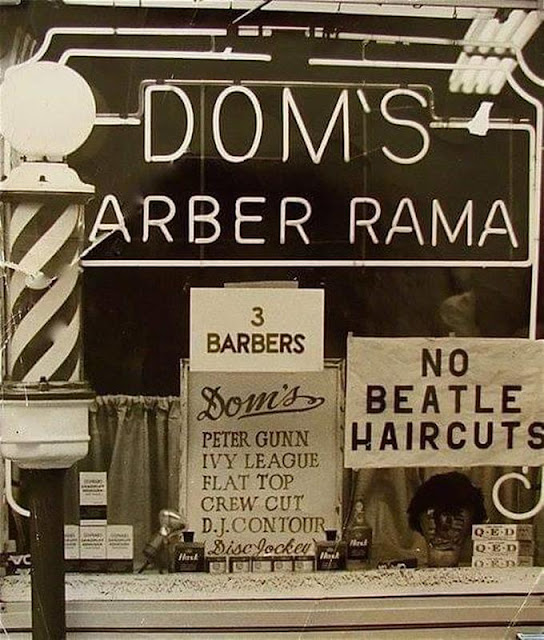 This is great!
The night after The Beatles first appeared on The Ed Sullivan Show my dad took all three of us boys to the barber shop (back in the day when barbers worked on Mondays!) and the first thing the barber asked us was if we all wanted Beatle cuts -
Of course all three of us crewcut kids said yes!  (kk)

The WCFL chart that you posted today brings back many memories.  I can think of a story for nearly every tune.
The Ronnie Dyson song (If You Let Me Make Love To You Then) Why Can't I Touch You ? was never one of my favorites.  It was playing on the radio once when my mom walked by.  She paused and listened to the lyrics. She is a strict Catholic woman and was worried about her little boy.  She pointed a finger at me and said, "If you keep listening to music like that, mister, you are going to get yourself in a mess!"  As she walked away, I hollered ..."I am not.  I don't even like that song!"
Phil – WRCO
I love it!  (I never particularly cared for this one either … but obviously we were in the minority as Dyson’s hit went all the way to #7 on the national charts … and #3 here in Chicago.  His follow-up hit, “One Man Band (Plays All Alone)” peaked at #11 here, too.  (kk)

You can tell the AM radio times were changin’ with the ‘CFL chart this week ...
TWO Top 10 hits running over five minutes!  "Spill the Wine" and "Are You Ready."
"Cottage Cheese" -- WHAT a cool record that was -- and a hit AFTER the other side was a minor hit first!
"It’s Your Life" is so NOT-Andy Kim sounding, but SO great ... and "Check Out Your Mind" is a great Impressions track, too.
Clark Besch

For the past couple of months, we’ve been telling you about an organization called Save Our Stages (SOS), dedicated to preserving the theaters and actors who have been forced to close their doors and stages due to the CoronaVirus pandemic.
The idea is to petition your local government representatives and ask them to pass a bill that will fund these organizations (many of whom depend on donations as it is to keep their doors open) and keep theaters and performing arts personnel afloat until things get back to anything even remotely resembling normal.
Well, two states (Texas and Minnesota) have taken the charge on this one, demanding that Congress allocated ten billion dollars to these organizations and individuals hurt financially during this shut down.
Much more here:  https://wcbsfm.radio.com/articles/radiocom/new-usd10-billion-plan-proposed-to-save-live-music-venues?fbclid=IwAR228HUmMZvbOThWCxee6Dut2md7pYs-rIzv_JJ1Fs_AWXIQo7UD-5mF5L4 …
But in the meantime you can help this cause by doing YOUR part and writing to your State Senators and Representatives demanding that they fight for this bill as well.  (It always seems to be the theater and performing arts that are set aside when it comes to any new funding … programs are being dropped regularly in schools across the country.  But those of us who ENJOY getting out to see a concert or play NEED these theaters to be able to reopen and entertain us again.)
Please review the information above … and then do YOUR part to make sure that this “treat” isn’t taken away from you moving forward.  Please voice your choice in support of the Save Our Stages Act. (kk)

A while back we told you about the new British documentary spotlighting their hot music program “Ready, Steady, Go,” the go-to show for teens across the pond during the most exciting time in music.  (Here in the States, we were all getting wrapped up and enjoying The British Invasion … but this was just life as usual in the UK, where many of these acts had already been enjoying a life of recognition a year or two before us Americans finally caught on!)
Harvey Kubernik tells us a bit more about the documentary (when is this thing finally going to air here in America?!?!?) as well as a brand new book, written by Andy Neill, that captures the whole experience.
https://www.musicconnection.com/kubernik-interviews-on-ready-steady-go-recent-documentary-and-upcoming-book-release/
The Ready Steady Go! book will be out later this year.
I wish the documentary would be shown Stateside. No idea if or when that might happen.
You will enjoy the Rock Doc book.
Also wanted to mention that it was great to see Casey Kasem's legacy remembered on your site.
Best,
Harvey
What a shame to read that only about 5% of these programs still exist!
I remember renting many of these "specialty" episodes on VHS when they first came out … themed programs that were released right after Dave Clark bought up the rights.  (Funny thing was ALL of the Dave Clark Five appearances were lip-synched and perfectly shot, NONE of which actually came from the Ready, Steady Go! Program!!!)  Still, these tapes offered TONS of great, one of a kind performances.  (And of course a program like this helped to fuel American made programs like “Shindig” and “Hullabaloo,” which were also top-heavy with the hottest British acts at the time.
It’d be cool to have all of these shows on DVD now in (ideally) nicely restored and enhanced video and audio.
But, if we have to settle for only the documentary, recapping the jist of the show, I’m fine with that, too.  (This sounds like something that would be PERFPECT for PBS to pick up!)  kk

From the DYK file, the Mayor of Atlanta that we have seen often lately fighting with her governor over closing the city is none other than Chicago music great 1960's hitmaker Major Lance's daughter!!!  Who knew???  Major was BORN in Georgia, but made his mark after moving with his family to Chicago in the 50's.
https://en.wikipedia.org/wiki/Keisha_Lance_Bottoms
"Do the MONKEY TIME!!!!"  "UM UM UM UM UM UM!"
https://www.youtube.com/watch?v=B0KlRpQeyvo
https://www.youtube.com/watch?v=V4hd8IiNjGk
Clark Besch
Ironically, I’ve been having on-going conversations with several people in Georgia since February regarding a large printing project that we’re doing.  Once Covid hit, everything was shut down and flight restrictions ever since have prevented them from being able to fly into Chicago to see their job printed.  (Georgia was one of the first states to drastically reduce its restrictions … and immediately became a “hot state” as the Corona Virus spread, spiking with numbers larger than at any time before, once they allowed residents to “socialize” again.)  As such, we’ve been monitoring their statistics quite carefully since Illinois’ numbers look considerably better than they did a couple of months ago.
Interesting fact … nope, I would have never known!
Tying it all back to music, Major Lance had SIX National Top 40 Pop Hits between 1963 and 1965:  “The Monkey Time” (#7, 1963), “Hey Little Girl” (#13, 1963), “Um Um Um Um Um Um” (#4, 1964), “The Matador” (#20, 1964), “Rhythm” (#23, 1964) and “Come See” (#40, 1965).
Meanwhile, Jerry Butler (The Ice Man), who was one of Major Lance’s musical contemporaries in the ‘60’s, also entered politics and was a Cook County Board Commissioner here in Chicago for decades after his recording career ended.  (Small world!)  kk

Here are a couple of EXCLUSIVE, one-of-a-kind Carpenters photos sent in by FH Reader Mike Wolstein …

Kent,I want to try to make up for that stupid error of mine (regarding Pet Clark's birthday) by sharing a very rare photograph with you and your readers of The Carpenters.  (I'm embarrassed beyond belief by my error.  I've learned that we can't always take for granted what we read on line until we back it up by getting the info from more than one source.  The site it came from was one I'd been on before, so I assumed.  but you know what they say about "assume".  I've made slight errors when passing along info, but this one hurts.  ;-(
I was given this photo by a lady I've known for many years, who used to do some photography for a local rock magazine.
As far as I remember, the pix were from a show the Carpenters did at the Mill Run Theater (ahh, sweet memories).  The time frame looks very early 70s, when they were just getting started. She gave me the pix about 20 years ago, so the memories are a bit fuzzy.
The photographer’s name is Sharon ... I'm withholding her last name by request.  (She’s a very private person … but gave us permission to run the photos on your site.)
Here are two of the three that she gave me ... the third is almost the same as the first one, but they weren't smiling … Sharon apparently caught them off-guard.
Mike 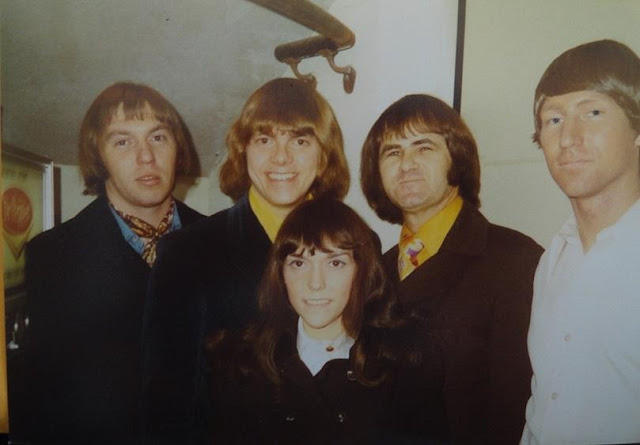 It's a little difficult to determine the vintage of this photo … although the timeframe certainly seems reasonable.  On the one hand, they both look EXTREMELY young (especially Richard!!!) but Karen also looks surprisingly thin in this photo.
Mike sent me this back in response …

If you look at the second picture, you’ll see she’s sitting on the floor in the midst of a bunch of people - and she's having an Italian Beef and a Coke!  Eating!!!  Very rare - both of these shots are one of a kinds.  I think they're from 1972 or thereabouts.
Mike Wolstein 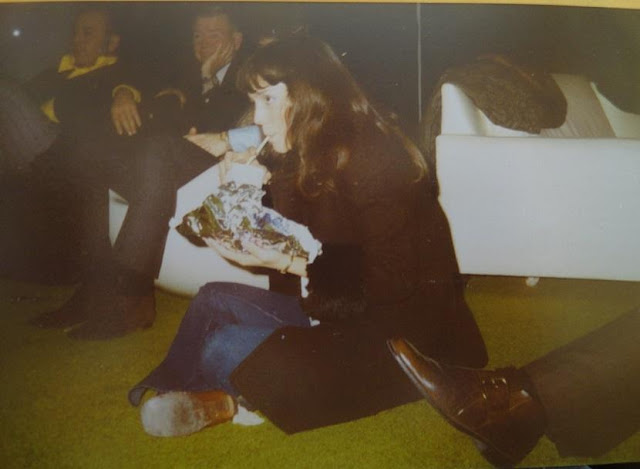 If you come to Chicago, you've GOTTA have the Italian Beef!!!  (We've introduced MANY a visitor to this Chicago tradition over the years!  lol)
Thanks, Mike ... I've got to agree with you ... these are one of a kind photos ... so please pass along our thanks to Sharon for allowing us to share them with our readers.  (Be sure to send her a link to the site so she can see them, too!)  kk