1970:  September 15th – Vice President Spiro Agnew says publicly that “the youth of America are being brainwashed into a drug culture by rock music, movies, books and underground newspapers.”

Also on this date, One of England’s premier rock and roll magazines, “Melody Maker,” named Led Zeppelin as England’s “Best Group,” replacing The Beatles in this category.  The Fab Four had held this honor for the previous eight years running.

And finally, also on this date, Jimi Hendrix made his last public appearance anywhere, jamming with Eric Burdon and War at Ronnie Scott’s club in London.  Three days later he would be dead.

From our "12 THINGS YOU NEVER KNEW ABOUT JIMI HENDRIX" Series from many moons ago (of course these are ALL well-known facts now ... but at the time this series was considered quite revolutionary!!!) 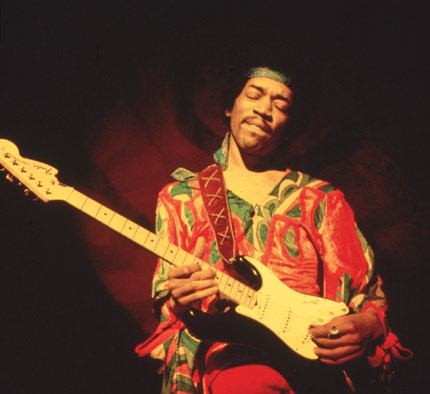 Not counting his impromptu jams with ERIC BURDON AND WAR at Ronnie Scott's Club in London on the 15th of September, HENDRIX performed before a live audience for the last time on September 6th, 1970, at the Isle of Fehmarn Love And Peace Festival in Puttgarden, Germany.

The last song he ever sang was his hit VOODOO CHILD, which means that some of the last lyrics he ever sang were "If I don't see you no more in this world, I'll see you in the next one ... and don't be late."  Cryptic in a way ... but most agree that JIMI never really believed he'd be around for very long.  Dead at 27, the world lost one of its greatest guitarists.  Too much, too soon, too late.

At the time, close friend ERIC BURDON (who, along with his new band, WAR, jammed with HENDRIX a few nights before he died) first said that JIMI had left a suicide note.  No note was ever found, however.  (According to long-time friend and bassist NOEL REDDING, the so-called "suicide note" was actually a poem that JIMI had written the day he died.  Later titled, THE STORY OF LIFE, it said "The story of life is quicker than the wink of an eye.  The story of love is hello and goodbye ... until we meet again.")

Interviewed by KENNETH ALLSUP on BBC's 24 HOURS Television Programme a couple of days after JIMI's death, BURDON said, "He made his exit when he wanted to.  His death was deliberate.  He was happy dying ... and he used the drug to phase himself out of this life and go someplace else."  This interview took place just 48 hours after JIMI's death and ERIC was grieving.  However, years later BURDON said that he regretted ever doing the interview, claiming to have been stoned out of his mind during the whole process ... he felt that he had sold out a close personal friend.

In reality, it is unlikely that JIMI even considered taking his own life.  In early 1970, he finally launched ELECTRIC LADY, his own recording studio, and was excited and motivated to record things his own way.  Unfortunately, the effects of the drugs compromised his abilities to do so more often than not ... but this was not somebody who was thinking about checking out.  In fact, he had meetings set up the next week to iron out management problems and review the tracks that were already in the can.

You can read the whole thing here:
http://forgottenhits.com/jimi_hendrix
Posted by Kent Kotal at 6:00 AM