And after just celebrating his 40th birthday, too.

(I suppose there’s some symmetry there … although for the life of me, I can’t think of this as anything other than a senseless and unnecessary act.)

John had just returned to the recording studio for the first time in five years and had given us enough tracks to fill both “Double Fantasy” and, a year later, “Milk And Honey” … finally, some new tracks in what had seemed like forever.

(The once most-prolific leader of The Beatles had abandoned most things musical after he and Yoko had their first child together, Sean ... who today is now a 45 year old man ... with John content to stay home as a “house husband,” caring for their young child.)

Truth be told, the importance of being the leader of The Beatles had meant less and less to John over their final years together, with Paul McCartney taking on much more of the leadership role … and composing the lion’s share of the group’s hit records after Manager Brian Epstein died in 1967.

Between his ever-growing dependency on hard drugs and his Yoko distractions, John drifted further and further away from being the vital Rock Star God he had devoted his whole life to trying to become.

Sure, there were still moments of brilliance … “Strawberry Fields Forever” and “A Day In The Life” in 1967 alone … plus “All You Need Is Love,” “Lucy In The Sky With Diamonds,” “Come Together,” “Revolution,” “I Am The Walrus” (how THIS became the B-Side to one of the weakest songs EVER to top the charts, “Hello, Goodbye,” is beyond me!), “Julia” and “Across The Universe” to name the most obvious stand-outs …

But for every one of those, we also had to drudge our way thru far less superior dreck like “Good Morning, Good Morning,” “Being For The Benefit Of Mr. Kite,” “Baby, You’re A Rich Man,” “Everybody’s Got Something To Hide Except Me And My Monkey,” “Glass Onion,” “The Continuing Story Of Bungalow Bill,” “I Dig A Pony,” “Dig It” and (God forbid) “Revolution #9!”  (Far too often, it seems during this era, John had gotten lazy, taking lyrical shortcuts or recycling old ideas, just to get the song done ... copying the words printed on a vintage circus poster, for example, in many cases, verbatim, or recycling what he was reading in the morning newspaper while eating his corn flakes ... with a Kellogg's cereal commercial on in the background ... falling back on past glories by "name dropping" ala "Strawberry Fields" ... where "nothing is real" ... "I Am The Walrus," "Lady Madonna," "Fixing A Hole" and "The Fool On The Hill" in "Glass Onion," for example ... which I found to be VERY disappointing as HE was always considered to be the strongest half of the Lennon-McCartney equation in this area ... witness the inventive and picturesque lyrics of say "Lucy In The Sky With Diamonds," compared by many at the time to one of Lennon's early boyhood idols, Lewis Carroll.)

Even his political leanings early on as a solo artist today, in hindsight, seem to lean on something created more as "attention grabbers" than anything of substance.  (Sure, “Give Peace A Chance” was significant “in the moment” … but it hasn’t aged very well … and does ANYBODY ever need to hear “Power To The People” again?)

“Woman Is The Nigger Of The World” probably hasn’t been played since it was released in 1972 … in fact most of his “Some Time In New York” album, with all of its political overtones, is best dismissed as an error in judgement, especially coming on the heels of something as brilliant as “Imagine” or even its primal scream predecessor “Plastic Ono Band.”

Still, there were were some gems along the way, including his first “official” #1 (in Billboard, that is), “Whatever Gets You Thru The Night” and, of course, the comeback singles “(Just Like) Starting Over” and “Woman,” (perhaps his most beautiful composition ever … although others will likely cite “Beautiful Boy” or “In My Life,” another brilliant track.)

That being said, nobody really expected brilliance from George Harrison or Ringo Starr … so when they achieved it (and they did!), it was QUITE the additional bonus!!!

But this was John Lennon, for God’s sake … the guy who said The Beatles were more popular than Jesus (no matter how many ways he tried to deny saying it later!)  It didn’t matter … we all knew it was true … at least in the minds of most of us who grew up on their music.

Are we older or wiser?

Does the benefit of those 40 years offer perspective or comfort?

Or is it just as painful as it was when it happened?

Would there have been a Beatles Anthology had John lived?

Might they have gotten together for some particular event?

Might John and Paul have taken a stab at writing something together again?

For most of us who were there, John Lennon’s murder is a moment frozen in time ...

Not unlike the first night The Beatles appeared on The Ed Sullivan Show ...

For those of us who experienced The Beatles first hand, we all know exactly where we were and vividly remember the moment we first heard the news

My phone rang off the hook all night long as the word spread.

(Ironically, I had rented a VCR player that night and was in the process of hooking it up when I first heard the news … it was a friend from school, sobbing as she tried to tell me.)  Believe it or not, I had rented the device in order to play my brand new copy of “Let It Be,” which I had just purchased a few days before, at a time was it was still commercially available to do so.  I didn’t own a VCR player yet … but knew that I’d eventually be getting one … so I snatched up this baby the moment I saw it … $80, I wanna say, in 1980 money … so that I would have it in my collection whenever that time happened to come.  First VHS tape I ever owned … and important that it should be.

From there, the phone just kept on ringing … I never did watch the movie that night (and had to return the player the following day) … I just couldn’t bring myself to watch it … whereas many absorbed themselves with ANYTHING to do with The Beatles for the next several weeks to come, I just couldn’t do it … it just didn’t feel right.  I finally bought a VCR player a few months later and watched it then.

John Lennon had a greater impact on my life than my Dad.  In fact, when my Dad died three years earlier, I can’t say that I felt anything near the emotional impact that this had on me.

My Dad was just my Dad.

A lifetime for some.

And now 40 years without.

The music, the impact and the influence is just as strong as it ever was.

They changed the world.

And they certainly changed mine. 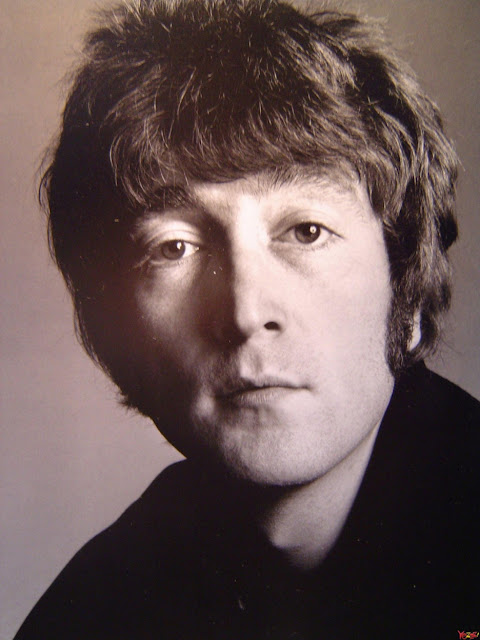