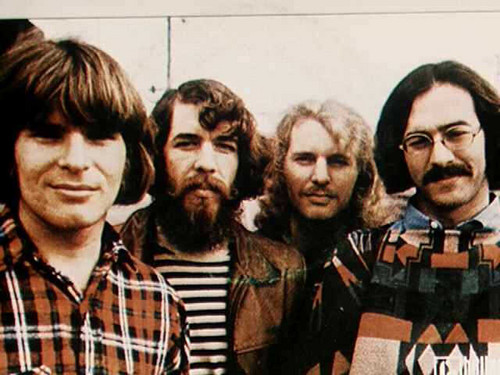 The singles honored were “Down On The Corner,” “Lookin’ Out My Back Door,” “Travelin’ Band,” “Bad Moon Rising” and “Up Around The Bend” …

While the albums receiving awards were their first five releases, including their debut, self-titled LP, “Creedence Clearwater Revival,” “Bayou Country,” “Green River,” “Willy And The Poor Boys” and “Cosmo’s Factory.”

In 1969 there was no hotter recording act on the planet … and that includes The Beatles’ “Abbey Road” album, Elvis’ big comeback and the introduction of Led Zeppelin to the airwaves.

Despite the fact that CCR never had a #1 Hit in Billboard, they topped the Cash Box and/or Record World chart THREE TIMES in 1969-1970.

An incredible EIGHT single sides made The National Top 100 List in 1969 alone … spending (thanks to overlaps and two-sided hits) an incredible 78 WEEKS on the chart in a 52 week year!!!

Here is how we described the group in our 2003 Forgotten Hits profile:

For starters, check out this track record:

In just four years, they released 17 Top 40 Chart Hits, including many two-sided hits. Virtually their ENTIRE singles catalog is still played regularly on both Oldies Radio and the Classic Rock Stations ... which makes it pretty tough to come up with anything even CLOSE to resembling a FORGOTTEN  HIT!!!

Lesser known hits, B-Sides and LP cuts like BORN ON THE BAYOU, LODI, COMMOTION, RUN THROUGH THE JUNGLE, SOMEDAY NEVER COMES, SWEET HITCH-HIKER, I PUT A SPELL ON YOU and their version of I HEARD IT THROUGH THE GRAPEVINE also continue to receive a fair amount of airplay.

In fact, percentage-wise, they may be the most-represented band on the radio when you consider how many songs get played in relationship to their total career output.

In that same four year period, they released seven albums worth of new material! GREEN RIVER and COSMO'S FACTORY both went to #1 and were triple and quadruple platinum sellers respectively. Their self-titled debut LP, BAYOU COUNTRY, WILLY AND THE POORBOYS, PENDULUM and MARDI GRAS rounded out the string of hit LPs.

In 1969 and 1970, they outsold THE BEATLES ... in fact, in just two years, CREEDENCE CLEARWATER REVIVAL sold more records than their label, Fantasy Records, had sold in their entire 20 year history combined!

You can read the entire piece here:
http://forgottenhits.com/creedence_clearwater_revival

Last year their performance at Woodstock (heretofore ignored for contractual reasons) was released in its entirety.  It is nothing short of amazing.

And in our recent poll designed to determine THE TOP 3333 MOST ESSENTIAL CLASSIC ROCK SONGS OF ALL TIME, Creedence placed 31 songs on the list, including NINE in The Top 500.  (The #1 Favorite?  “Fortunate Son,” which came in at #32, just ahead of “Who’ll Stop The Rain” at #39.)

You can find that complete list posted here:
https://classicrockessentials.blogspot.com/
Posted by Kent Kotal at 6:00 AM